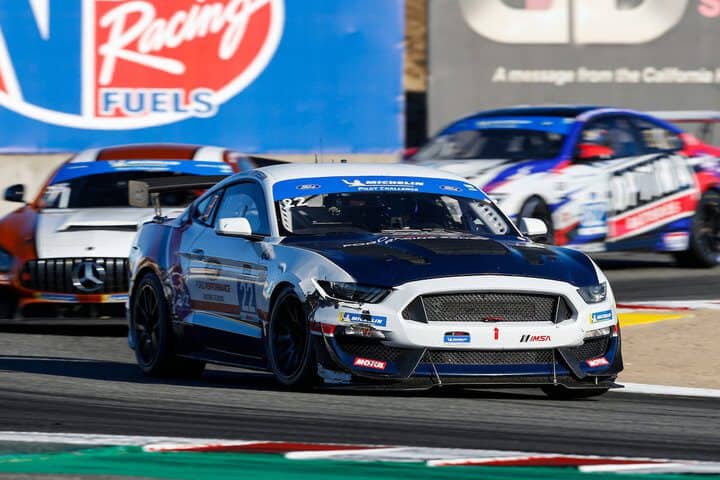 IMSA Michelin Pilot Challenge teams will be back in action Saturday (Sept. 11) at WeatherTech Raceway Laguna Seca for two hours of action.  34 teams will do battle on the 2.238-mile road course.

In Grand Sport, there are 21 teams entered, down from 24 at Road America.  The biggest change of the weekend is not even on the current entry list.

Wright Motorsports announced Wednesday that Ryan Hardwick has tested positive for COVID-19.  As a result, he is out of the car for this weekend.  Maxwell Root will race in Hardwick’s place.  It will be Root’s second race of the year in the No. 16 Porsche.  Back at Sebring, Hardwick was still recovering from a concussion suffered at Daytona.  Root drove in his place, won the pole and finished second in the race.

Automatic Racing has an all-new lineup in their No. 99 Aston Martin.  Weiron Tan and Anderson Tanoto will both make their series debuts.  Tan comes to the series after previously racing in the FIA World Endurance Championship’s LMP2 class for Jackie Chan DC Racing.  He has one career class victory there at Fuji Speedway in 2018.  Prior to his time in WEC, Tan competed in the Pro Mazda Championship (now Indy Pro 2000 presented by Cooper Tires) for Andretti Autosport, finishing fourth in the championship in 2015.

Tanoto, who hails from Jakarta, Indonesia, has not raced very much since the COVID-19 pandemic began.  Prior to that, he competed in Porsche and Audi single-make series in Asia.

Stephen Cameron Racing is also entered for their third appearance of the season.  Greg Liefooghe and Sean Quinlan will be back in their BMW M4 GT4.

Likely the biggest team not entered is Rebel Rock Racing with their Chevrolet Camaro GT4.R.  The team discovered at Road America that their chassis had cracks in it.

Some disappointing news prior to today's race. The chassis cracking, discovered after Practice 1, is just too extensive to risk entering the #71 @Urban_Grid @TeamChevy Camaro GT4.R in this afternoon's race @roadamerica. Unfortunately the team has made the decision to withdraw. pic.twitter.com/IowGleuVYy

Unfortunately, the team was unable to rectify this serious issue in the month since Road America.  As a result, they will not be on-site this weekend.  In addition to Rebel Rock Racing, Notlad Racing with RS1, Blackdog Speed Shop and FCP Euro are not entered.

In TCR, there are 13 cars entered.  As compared to Road America, there are no changes.  There will be seven Hyundais (fives Veloster N TCRs and two Elantra N TCRs), three Hondas, two Audis and the sole Alfa Romeo.

The WeatherTech Raceway Laguna Seca 120 is scheduled to go green at 7:40 p.m. ET Saturday evening.  The race will be streamed live on NBC Sports’ TrackPass.