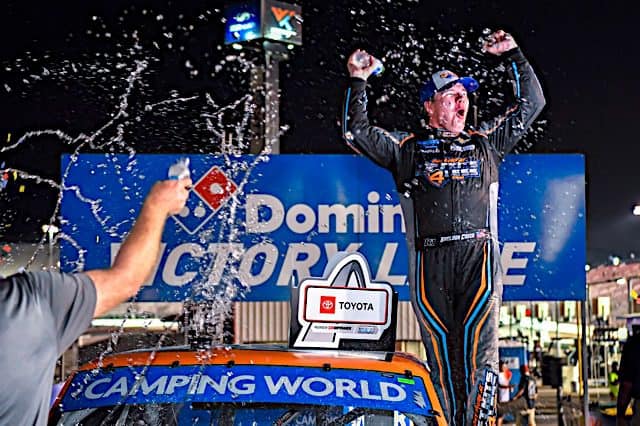 Two races into the Camping World Truck Series playoffs and Sheldon Creed has made sure everyone knows he’s there. Back-to-back wins at World Wide Technology Raceway at Gateway and Darlington Raceway have put him solidly into the Round of 8 and have helped pad his playoff point total, which will ultimately help him down the stretch as the season wears on.

The thing is, Creed didn’t just win those two races or happen to be at the right place at the right time. Instead, he flat dominated, leading 246 of a combined 307 laps across the two events. It’s almost as if someone flipped a switch on the No. 2 team when the playoffs began.

After all, the defending champion had just a single win throughout the regular season compared to three last year, and he’d posted three DNFs in the final seven races prior to the playoffs (Charlotte Motor Speedway, Texas Motor Speedway and Knoxville Raceway).

While Creed has been on my list of championship favorites despite an up-and-down regular season, these last two races have helped him assert himself into the championship conversation a bit more.

Of course, two races don’t fully make up a championship run. But like I’ve said before, the driver of the No. 2 GMS Racing Chevrolet has nothing to lose. He’s stated in the past that he doesn’t want to race in the Truck Series next year, so this championship battle is essentially his way to show off to potential teams and sponsors for 2022.

With that said, should Creed manage to win the championship, he’d become just the second driver to score back-to-back titles in the Truck Series, joining Matt Crafton (2013, 2014). One of the biggest differences, though, is that Crafton did it in a much less flashy fashion, scoring just three victories across those two championship-winning seasons. By comparison, Creed has three wins this year alone. Crafton did score his third title with a winless 2019 campaign where he posted 18 top 10s in 23 races.

A title this year would also put Creed in some elite company with the multiple championship winners in the history of the series in addition to Crafton. Over the previous 26 years of Truck Series competition, just four drivers have won more than a single championship, and if you’ve been watching the series for a while or know much about its history, names like Todd Bodine, Ron Hornaday Jr. and Jack Sprague should ring a bell.

Hornaday was the first to score multiple titles when he won it in 1996 and 1998 before also going on to snag the 2007 and 2009 championships. The NASCAR Hall of Famer holds the honor of being the lone four-time champion in Truck Series history and at the time had set a series record of 51 wins in 360 starts. That win total has since been eclipsed by Kyle Busch but the significance of Hornaday’s accomplishments remains.

Really, the statistics on his career speak for themselves: 27 poles, 158 top fives and 234 top 10s. In fact, many of those numbers likely won’t be eclipsed as most drivers in the modern era of NASCAR spend a couple seasons at the Truck Series level and then move on toward the Xfinity or NASCAR Cup series if they don’t just stop racing on a national level completely.

It was Sprague that stepped in between Hornaday’s first two championships with his first career title in 1997. He had just three wins but also posted just a single DNF through 26 races on the schedule. Additionally, Sprague posted 16 top fives and 23 top 10s that season. He followed up that title with one in 1999 and another in 2001. While his numbers weren’t nearly those of Hornaday’s, in 197 starts, Sprague posted 28 wins, 136 top fives, 192 top 10s and 32 poles.

Meanwhile, the only other multi-time champion is Bodine, whose two titles came in 2006 and 2010. Sporting the Lumber Liquidators colors for the majority of his 2006 campaign, three wins, 12 top fives and 16 top 10s was enough to award Bodine the title over Johnny Benson.

Fast forward to 2010 and the majority of that season was run unsponsored. Despite having GEICO for the season opener at Daytona International Speedway and Bodine having confidence that a deal would be signed in the few days that followed the runner-up finish in that race, most of 2010 was backed out of pocket by Germain Racing. It turned out to be worth it, though, as the final season for Germain in the Truck Series ended in a championship with four wins, 17 top fives and 20 top-10 finishes in 25 races.

Obviously, we still have seven races until the 2021 Truck Series champion will be crowned, but make note that Creed has thrown his hat in the ring in a spectacular fashion. And aside from joining some pretty incredible company from series history, another title – or even being a major threat throughout the playoffs – can ultimately be the make or break for an Xfinity Series sponsorship for 2022.