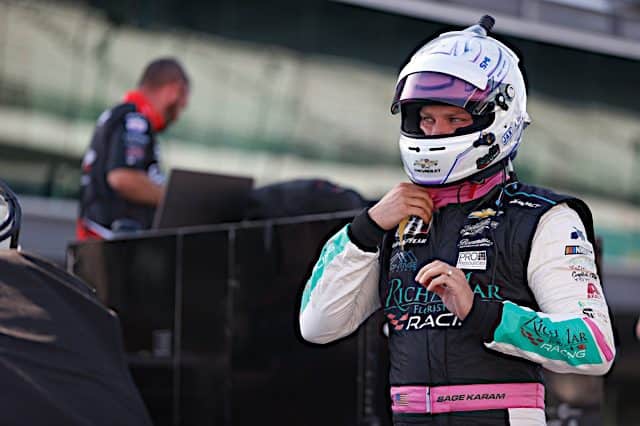 Anderson also noted that Karam will compete in the Oct. 9 Xfinity race at Charlotte Motor Speedway ROVAL in addition to making his Truck Series debut in Anderson’s No. 3 truck at Martinsville Speedway on Oct. 30.

Looking forward to having Sage behind the wheel of the 31 Camaro at @BMSupdates and @CLTMotorSpdwy later this year along with making his @NASCAR_Trucks debut at @MartinsvilleSwy in the 3. pic.twitter.com/kxg04Vls0G

Karam, a 25-year-old IndyCar driver who has competed at every Indianapolis 500 since 2014, made his debut in stock cars in the Xfinity Series race at the Indianapolis Motor Speedway road course last month for Jordan Anderson Racing. Karam was flirting with a top-15 finish before electrical problems sidelined him with three laps remaining en route to finishing 26th. The upcoming race at Bristol will mark Karam’s first oval start in a stock car.