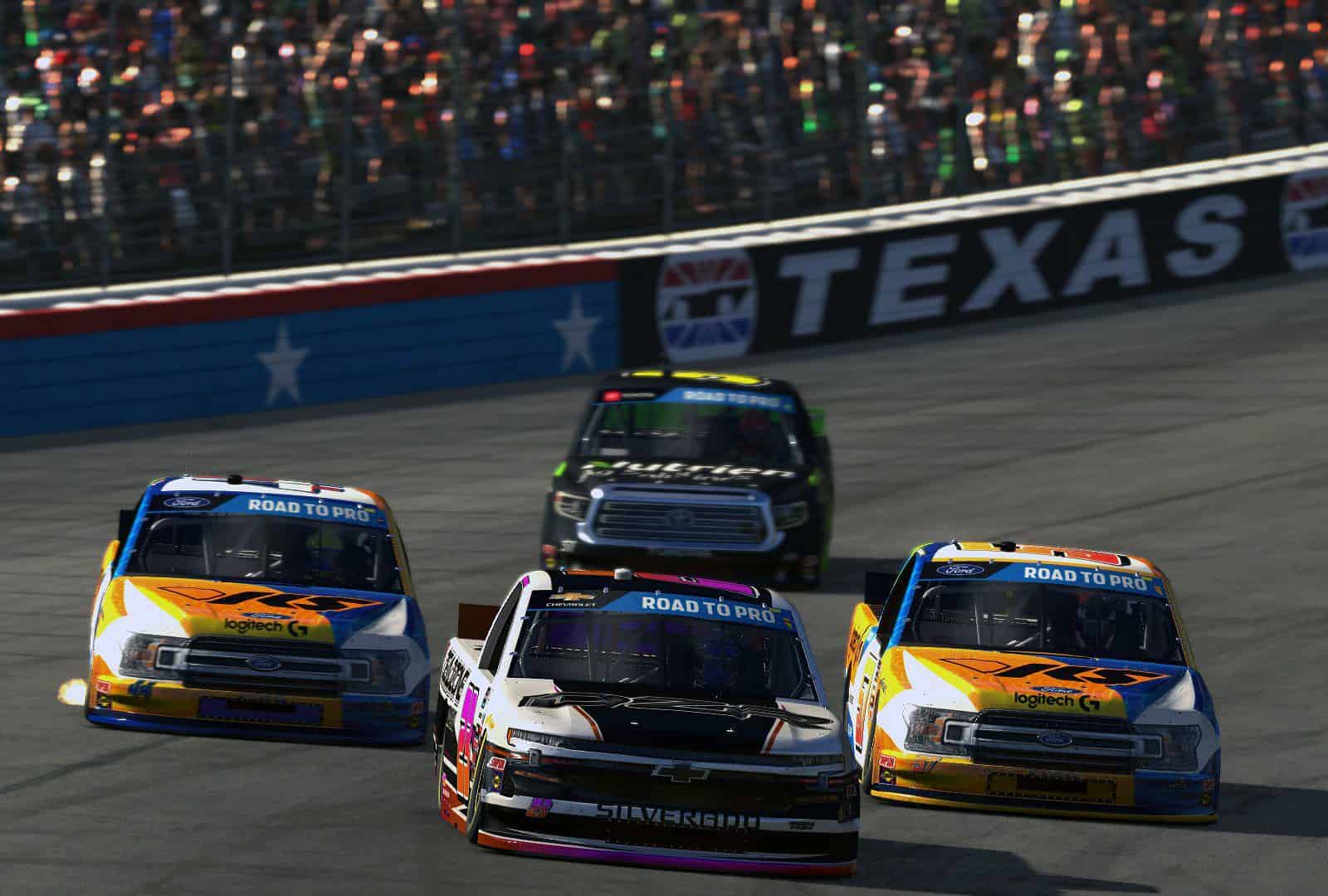 It’s currently Week 13 on the iRacing service and with that comes a new build containing widespread updates across most of the content. With eRacr.gg and Monday Night Racing on a break, and FTF Racing and the eNASCAR Road to Pro taking a week off, the only community with racing to talk about is the 100% Cup Series.

After an incredible run to start the 2021 Regular Season, Bryson Hixenbaugh hasn’t been able to win since Nashville Superspeedway in June. Hixenbaugh led the standings for 20 of the first 25 weeks of the season, but wound up losing the regular season title to Jon Dulaney at Daytona.

Hixenbaugh came out of the gate with a pep in his step at Darlington Raceway. While Dulaney took the pole position, Hixenbaugh started right behind him in third. Throughout the race it was a battle between the two, as they led a combined 357 of the 367 laps on the night. Hixenbaugh took the first stage and Dulaney took the second, but it was Hixenbaugh who took the overall win and punched his ticket to the next round before anyone else.

Hixenbaugh strikes first in the playoffs winning at @TooToughToTame and locks into the round of 8!!! #iracing | #Darlington | #enascar | #Simracing | #Racing pic.twitter.com/h7PVmsroht

Another Friday race due to the Saturday Night Richmond race. This time, Jon Dulaney would not be denied. The Regular Season Champion started on the pole position and absolutely crushed the rest of the field. There were only eight cautions over the course of the 400 lap event, and only three drivers completed every lap.

Bryson Hixenbaugh, already locked in from his Darlington win, led 15 laps but retired after only 90 laps. Dulaney took full advantage, winning both stages and leading 349 of the 400 laps on the night en route to score the victory. A perfect score, but more importantly, Dulaney takes his seat in the next round.

Mathematically, Cam Stone has also locked his place in the next round even if there’s a new winner from 13th through 16th in the standings. Adam Benefiel hasn’t raced yet in the round, but he had enough playoff points to still place 11th after two races. Demaris Hickinbottom currently holds the cutoff spot.

On the outside looking in to the Round of 12, it’s Cody Burd, RJ Root, Mason Lowery and Chad Edwards. Edwards hasn’t raced yet either and is likely not going to make it. The other three can point their way in with a full field, but will likely need to win to advance.

Most of what is covered in the iRacing Weekly Roundup is related in part to the NASCAR side of the service. There wasn’t too much for NASCAR fans to get excited about in the 2021 iRacing Season 4 build, but there were some substantial changes that will affect a few things going forward.

The road tire in general was updated service-wide, and specifically for the NASCAR vehicles, the tire will now drive more accurately when the virtual rubber meets the virtual pavement. In testing, the NASCAR Xfinity Series cars felt more connected and less like they were driving with glass wheels on an ice surface.

While the Cup cars and Trucks seemed to have more grip during this series over the summer, those tires will also see changes.

Did you miss the season finale of the #eRRRS? Check it out on our YouTube here and see how our champions were crowned! https://t.co/mESowulkwP

That will definitely change the dynamic of the eRacr.gg Roval Racing Series, should it return. Road races for any other series will also see different racing, whether the added traction means better racing is still to be determined.

NASCAR is likely going to stay with the current lineup of road courses in the future schedule, so the leagues that follow those schedules like FTF and 100% will have to plan for these changes specifically with the Cup cars or NEXT Gen cars.

Plus, the lower FTF Grand National Series presented by Barr Visuals runs a ton of road races as well. This could be good for that series as well.

Brandon Hawkin gets it done in the @MotorsportsDrop 2 Hours at Bathurst! pic.twitter.com/bM10miaHIE

For Monday Night Racing’s Season 4 schedule, there are a few combinations that could see better racing with updates to the cars that will be driven. On November 22nd, MNR will take the Dallara IR18 IndyCar to the Daytona Road Course. In the Season 4 build, one of the talking points was that drivers will be able to drive it off of the rear tires more, which should allow drivers to drive more on the edge.

On January 17th, 2022, the series will take a Porsche to the Red Bull Ring. There is a new Porsche available in the Porsche 911 GT3 Cup (992), but the series often uses the 911 RSR. If there is a change of car, it could mean a greater challenge. Tires on certain cars will be able to drive more on the edge without the tires giving up.

Finally, and possibly the most important update comes for the future top drivers. Both the NASCAR Camping World trucks and the NASCAR Xfinity cars have new shock settings on the setup page. Older setups will work, but now eNASCAR Road to Pro drivers, who race the trucks, have more variables to adjust.

The Top 20 that move on to the Challenger Series will be in the Xfinity cars. While the trucks have four-way adjustable shock, Xfinity cars have a five-way shock. The NEXT Gen cars that will likely be in use for the eNASCAR Coca-Cola iRacing Series next season uses a six-way shock, so as you move up the ladder, there’s more fine tuning to look forward to in the shock department.

FTF Racing heads to Richmond Raceway for the second race in the Round of 16 on Sunday night, live at 8:00 p.m. ET on BottomSplit.