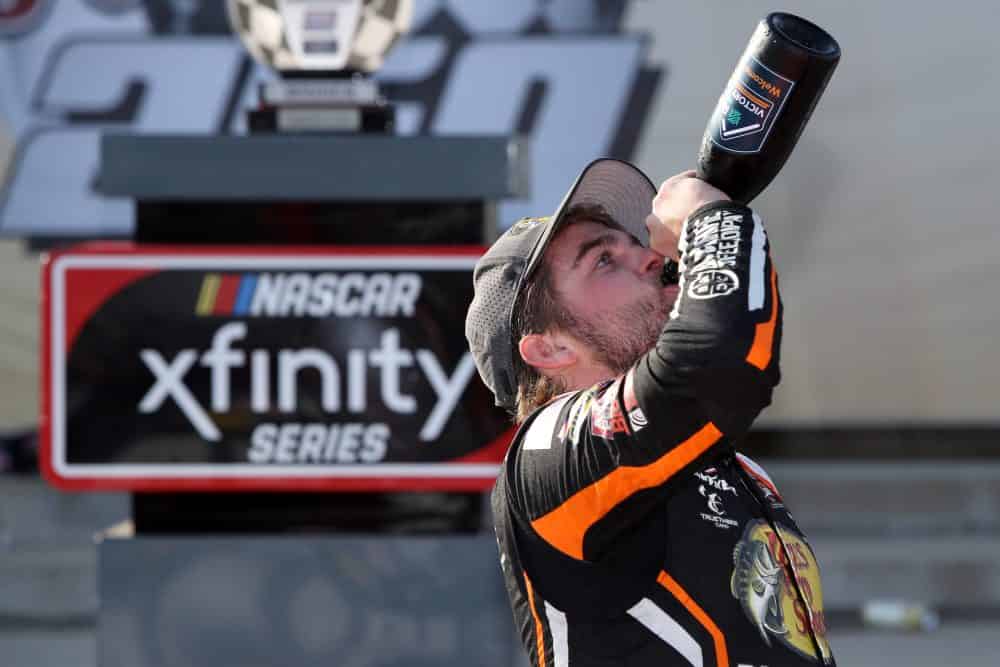 It seems all it took for Noah Gragson to win in 2021 was to sign a new contract with JR Motorsports for 2022. For the first time in his NASCAR Xfinity Series career, he has won back-to-back races, winning the Go Bowling 250 at Richmond Raceway on Saturday.  Last week Gragson won at Darlington.

Gragson and the No. 9 JRM team were among those who elected to pit for their last set of fresh tires during a lap 181 caution for Landon Cassill’s stalled car at the pit road entrance. 10 cars stayed out, including Justin Haley, Riley Herbst, Sam Mayer and Dale Earnhardt Jr. Their hope was for another caution to come out later in the race, allowing them to put on their last set of fresh tires.

That caution came out on lap 222 when Josh Williams and Akinori Ogata collided and spun in turn 1. Teams who hadn’t put their last set of fresh tires pitted, and some pitted for scuffs. Two late cautions on laps 230 and 237 hindered the forward progress for drivers with new rubber and, in the end, gave Gragson few enough laps to hold off Haley.

By coincidence, Gragson driving the No. 9 and Haley in the No. 11 finished 1-2 on the 20th anniversary of the 9/11 terrorist attacks. In third place was John Hunter Nemechek driving the No. 26 Sam Hunt Racing Toyota. It’s SHR’s best career finish in the team’s short history and the first top five for the organization. Justin Allgaier finished fourth and Herbst finished fifth.

Dale Earnhardt Jr. made his yearly appearance in the NASCAR Xfinity Series. Post-race, Earnhardt said that the car wasn’t exactly to his liking and that he couldn’t dial it in. Despite that, Earnhardt had speed. He started 30th and made his to 19th before the competition caution. He failed to make any ground beyond that before the end of stage one.

At the end of the second stage, Earnhardt was 12th and later battled inside the top 10 at the beginning of the third and final stage. While he didn’t have winning speed, his Chevrolet had top-10 speed. During the lap 181 caution, Earnhardt and his team decided to stay out and gamble on another caution coming out later in the race to give them a tire advantage on the field.

His team pitted during the Williams-Ogata caution, but Earnhardt sped on pit exit, sending him to the rear of the field on the restart with 20 laps to go. He lucked out when the caution immediately was displayed again for Tommy Joe Martins, who crashed in turn 1. Still, with the limited laps remaining and another caution coming out with 14 laps to go, Earnhardt was only able to climb to 14th in the running order.

Junior Nation, and the NASCAR fanbase in general, may have been robbed of a top-five finish for Earnhardt Jr., if not a win. But they are still fortunate enough that he wants to race and does once a year in the Xfinity Series. He had moments of hard racing, and his presence was another layer to the Go Bowling 250. 14th wasn’t the day Earnhardt expected or the fanbase wanted, but seeing him race will always be placed in the “good” column.

The Good and the Bad and Just the Bad

This is section of this week’s Xfinity Breakdown has a modified title because those drivers on the playoff bubble who needed a good day didn’t but were lucky when others didn’t either, with Riley Herbst being the lone exception.

Jeremy Clements started seventh and that is as high as he raced, almost immediately falling to eighth behind AJ Allmendinger on the start. He slowly fell through the field and by the end of stage one found himself in 29th. As the second stage progressed, he did regain some of the ground lost. Clements hovered around 20th for much of the race before finishing 26th. He entered the race 78 points above the cutline but exited 74 points above. Not much damage was done, but Clements lost an opportunity to put distance between his fellow bubble drivers.

Richmond has not been Brandon Jones’s best track statistically, but he needed to have the best Richmond race of his career and didn’t. He scored zero stage points and finished 20th after spending most of the race outside the top 15. The decision to stay out and for others to pit was the only reason Jones was inside the top five with 20 laps to go. He quickly fell like a rock in the race’s final laps, and the gamble to stay out on old tires didn’t work. Despite the lackluster day, he did gain two points on the cutline and is now 67 points ahead of Michael Annett.

Herbst was the only playoff bubble driver to improve his points situation. The decision to save a set of tires like Earnhardt Jr. proved fruitful. In the race’s final laps, he fought his way from 14th to fifth, putting his late-summer charge in the standings back into action after the speed bump at Darlington. Herbst gained 20 points on Annett and now sits 66 points above the cutline.

The past three races have not gone the way Annett and the No. 1 JR Motorsports team would have hoped following his return from a leg injury. He scored no stage points Saturday at Richmond and was no real threat for the top 10 all race long. Annett finished 22nd and is 66 points back from Herbst. Annett will need to win Bristol if he is to make his fourth Xfinity Series playoff appearance.

What’s bad for Clements, Jones and Herbst is they aren’t entirely safe as the series heads to Bristol. Eight points separate the three of them. Discounting the races Annett has crashed in, Annett averages an 11th-place finish at Bristol. With the speed and success JRM has experienced lately at Bristol, Clements, Jones and Herbst can’t play it too safe should Annett get data from JRM teammates to go for the win.

Plus, what if tire strategy plays a role in deciding who wins and a surprise winner like Ryan Sieg or Brandon Brown wins Bristol with fresh tires next weekend? If that happens, one of the three above the cutline would be eliminated. Who gets eliminated would be decided on stage and race finishes. Clements and Jones did themselves no favors by holding course in the points standings after Richmond.

Tommy Joe Martins nearly won the first stage of Saturday’s race. He pitted during the competition caution on lap 35 for one of his three fresh sets of tires. Martins was one of the few who made that strategy call, and it nearly worked out for him. He took the lead from Allmendinger with six laps to go in stage one, but with Allmendinger in a fierce battle with Austin Cindric for the regular-season championship, Martins didn’t get too far ahead. On the final lap of the stage, David Starr was an obstacle in his way.

Starr was fighting to stay on the lead lap and had the right to do so, albeit this was not the classiest of moves by the seasoned driver. He essentially became a pick for Allmendinger, allowing AJ to just edge the nose of his car in front of Martins. Allmendinger won the stage and Martins was denied his first career stage victory.

His race took a significant turn for the worse when Martins came down across the nose of Spencer Boyd entering turn 1 on lap 85. Martins didn’t hit the wall but spun. Just 85 laps into the race, the spin left Martins forced to put on his last set of sticker tires. Throughout the rest of the race, he ran in the mid-30s, seemingly saving the rubber on his tires. Capping off his day, Martins’s right-front tire blew on lap 230, and he pancaked the outside wall in turn 1.

Saturday marked back-to-back races where Martins left the racetrack with a wrecked racecar. A stage victory wouldn’t have alleviated the pain of two lost cars, but it certainly would’ve been a peg to hang a stage winner hat on. Unfortunately, it just wasn’t meant to be Martins Motorsports’ day.

An eighth-place finish will likely feel like a victory to Brandon Brown and Brandonbilt Motorsports after the two months the team has endured. Brown was one of the drivers who restarted the race on lap 230 on his final set of fresh tires. Brown spent most of the race just inside the top 20. That’s where he restarted on lap 231, in 19th. Through the mayhem and three, four and at moments five-wide restart racing, Brown avoided the mayhem and drove from 16th to eighth in the final eight laps of the Go Bowling 250. It’s his first top-10 finish since Mid-Ohio in June after finishing 28th or worse in six of the 11 races since.

“I don’t know where the rest of the team went. They’re probably going to be waiting in victory lane. What do you (the fans) say, we climb the fence? You guys want me to climb the fence?” – Noah Gragson

I’ve mentioned the points battle at the playoff cutline. As long as there isn’t a winner from below the cutline, Clements, Jones and Herbst will be in the playoffs. Annett, Sieg, Brown and others will need to win at Bristol to continue their pursuit for a championship. While other positions can be exchanged throughout the top 10 in points, none is more critical than the regular-season championship battle.

Allmendinger remains the championship points leader after Richmond, holding a five-point lead over Cindric. Both were front runners in Saturday’s Go Bowling 250. Neither had winning speed but the battle to be ahead of the other was evident. Cindric even pitted for scuffs during the final caution. Allmendinger ultimately finished 18th and Cindric 16th, but Allmendinger’s 19 stage points to Cindric’s 13 was the difference-maker in the standings after the race.

When the 2022 NASCAR Xfinity Series schedule is released, I hope to see the Richmond race again be a Saturday doubleheader with the NASCAR Cup Series. I think it would be great to see action at Richmond from Thursday to Saturday. Have both the Cup and Xfinity fields practice on Thursday, qualify on Friday and then race on Saturday. Bring the Whelen Modified Series back, too, and schedule them once again on Friday night.

One opportunity remains for the field of NASCAR Xfinity Series racers to pad their playoff points, point their way into the playoffs or win their way in. Next Friday, Bristol Motor Speedway’s Food City 300 is the regular-season finale race. Race coverage begins at 7:30 p.m. ET on NBCSN and PRN. Next Friday is the Xfinity Series’ only trip to Thunder Valley in 2021, as the series did not participate in the Bristol dirt race weekend earlier this year. After Bristol, the 2021 Xfinity Series playoffs begin. The Round of 12 will be Las Vegas, Talladega and the Charlotte ROVAL. The Round of 8 will take the series to Texas, Kansas and Martinsville before crowing a champion at the Championship 4 race at Phoenix Raceway on November 6.