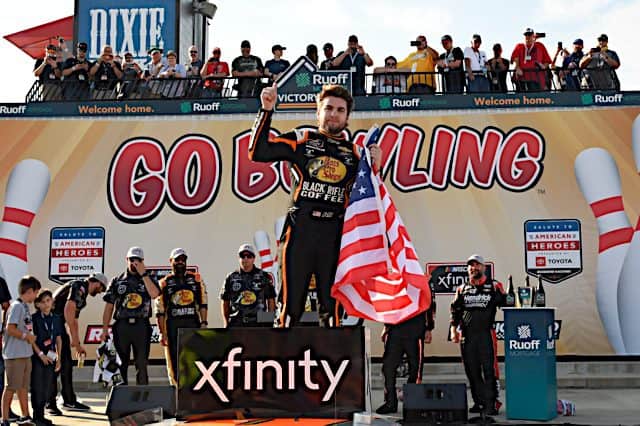 “He (Haley) has the tires, but the thing that kept us alive were those two cautions,” Gragson told NBCSN after the race. Gragson also dedicated his win to the lives that were lost 20 years ago from the attacks on Sept. 11, 2001.

An emotional @NoahGragson reflects on what it means to win on this day at @RichmondRaceway. pic.twitter.com/HpMklrkNNF

Justin Haley was second, while Camping World Truck Series regular John Hunter Nemechek scored a third — his best Xfinity finish since the fall Bristol race in 2019. Justin Allgaier, who won the last two races at Richmond, started near the front and faded to outside the top 20 by the end stage one. However, Allgaier slowly climbed up through the field and ended with a fourth-place finish. Riley Herbst rounded out the top five.

The biggest-name driver in the race was Dale Earnhardt Jr., who’s in the 2021 Hall of Fame class. Having last raced in 2020 at Homestead-Miami Speedway, Earnhardt made early contact with Josh Williams. Earnhardt drifted up into the No. 92 car off turn 2, which made Williams loose. Later in the race, Earnhardt was in prime position to take advantage of fresh tires but sped on pit road. Earnhardt did not make up as much ground and ended up with a 14th-place finish.

“They race hard in the middle of the pack especially against me,” Earnhardt Jr. said after the race on NBCSN. “We did not have the car we were looking for but we could not figure to get it around the track. It was fun racing in the Xfinity Series and these guys have so much heart and race so hard.”

Early on, AJ Allmendinger took the lead on lap 46 after passing polesitter Austin Cindric. Allmendinger and Cindric were separated by one point coming into today’s race.

After pitting during the competition caution for fresh tires, Tommy Joe Martins passed Allmendinger for the lead with less than 10 laps to go in the stage. On the final lap of stage one, Martins approached the No. 66 of David Starr through turns 3 and 4. As the Nos. 16 and 44 approached the green-and-white checkered, Starr’s car broke Martins’s momentum enough, allowing Allmendinger to win the stage.

Martins had his luck turn bad after his second-place finish at the end of stage one. After a slow pit stop, Martins spun off turn 2, making contact with the No. 90 of Spencer Boyd. Martins’s afternoon went from bad to worse as he smacked the wall on the restart with 20 laps to go and ended up 37th.

The middle portion of the race turned into a Joe Gibbs Racing playground as Hemric and Gibbs both led several laps.

There was a close call around lap 147 with the No. 74 car of CJ McLaughlin. After starting the race many laps down with engine issues, McLaughlin returned to the track. While coming off turn 2, McLaughlin slowed to come onto pit road, right in the path of Jade Buford. The No. 74 spun but avoided contact with the wall and other cars. Gibbs secured the stage 2 win under caution.

Tire strategy was the main storyline as the cautions changed up the race. When the caution came out for Bayley Currey spinning off turn 4 on lap 170, playoff-hopeful Ryan Sieg started the strategy split by pitting while everyone else stayed out on the track. Burton took the lead after Gibbs spun his tires on the restart. After 10 green-flag laps, Landon Cassill stalled his car to bring out the sixth caution of the day. Many of the frontrunners, including Burton, Gibbs and Gragson, took the opportunity to take tires. Burton worked through the traffic and took the lead on lap 193.

For the last 25 laps, cautions were abundant. Akinori Ogata and Williams spun together into turns 1 and 2 to bring out the caution with 26 laps to go. Leader Burton and other drivers pitted for tires, even if the tires were older and scuffed. Allmendinger, Cindric and Brandon Jones did not pit.

Gragson positioned himself right during the final restart of the day. The win was not secured yet, as Haley had fresher tires and was closing in, but needed another lap to pass the No. 9. Gragson scored his fourth career Xfinity win.

The NASCAR Xfinity Series has one more race before the playoffs are set, which will be next week for the Food City 300 at Bristol Motor Speedway (Sept. 17).