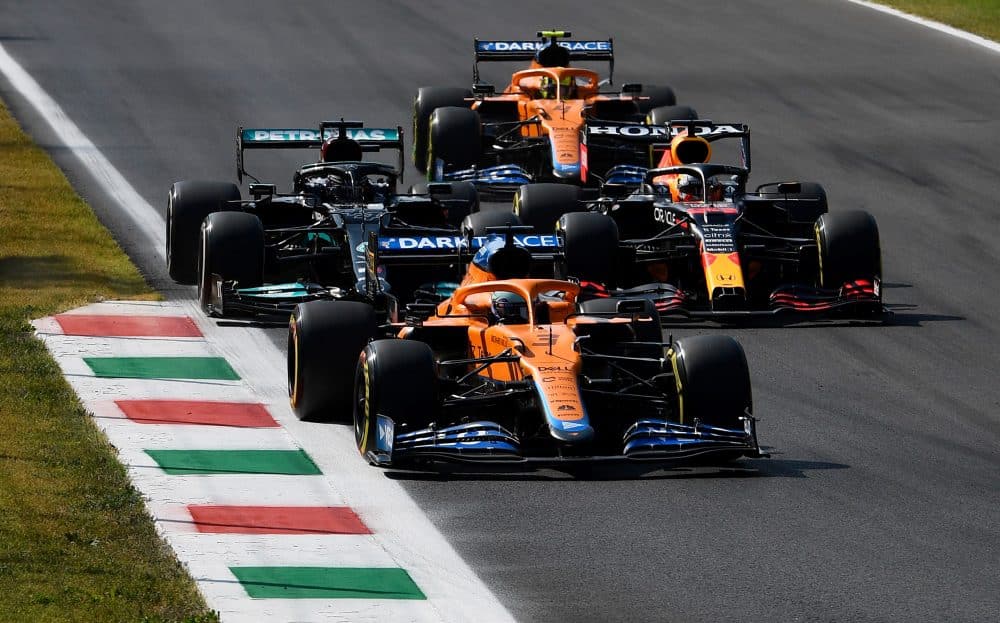 Every year it seems the Italian Grand Prix is a candidate for race of the year, in 2019 Charles Leclerc brought home an emotional home victory for Ferrari and last year Pierre Gasly stunned F1 world by winning in an AlphaTauri.

Following a textbook drive and flawless teamwork, McLaren’s Daniel Ricciardo took the checkered flag at Monza with teammate Lando Norris completing the 1-2 for the team. Logging the Aussie’s first win since Monaco in 2018 as well as the McLaren’s first win since 2012 AND first 1-2 finish since 2010.

After starting dead last after an engine change penalty, Valtteri Bottas fought his way back for a P3 finish.

Leclerc brought his Ferrari home P4 in front of the Tifosi, while Sergio Perez was dropped from third to fifth after a corner cutting penalty regaled the Mexican down the order. Carlos Sainz, Lance Stroll, Fernando Alonso, George Russell and Esteban Ocon completed the points paying spots.

Max Verstappen and Lewis Hamilton would both DNF the Grand Prix after crashing out in the first turn on Lap 26. While Mercedes leads the contractors standings still, Verstappen maintains the lead in the driver’s standings.

Both AlphaTauri cars would fail to finish, as Tsunoda would DNF before the start and Gasly pulled in after a few laps.

Off the lights out, Ricciardo took control from Verstappen. Norris slotted in front of Hamilton, while Antonio Giovanazzi was spun by Sainz in the second chicane. Verstappen and Hamilton also made contact in the same corner, however the stewards declared it a racing incident.

After Ricciardo pulled the trigger on pit stops first, Verstappen would follow a lap later setting off a wild chain of events. Verstappen suffered an 11.1 second stop setting him back down the order. A few laps later Hamilton was dinged with a 4.6 second stop, as the Mercedes exited the pits the two were wheel to wheel.

The two made contact, launching Verstappen over the top of Hamilton exiting the first turn. The two would end up beached in the gravel and retired from the event. The safety car came out giving Ricciardo the lead, and a hard charging Bottas and Sergio Perez in his mirror. Perez was dinged with a corner cutting penalty, giving the Red Bull a chance to hold up Bottas. As the laps clicked away, the Honey Badger led his teammate by around 1.5 seconds with McLaren ordering Norris to stay behind.

After three long seasons, Ricciardo led his teammate off of Paribolica to claim his seventh career victory and first with a team other than Red Bull.

“I’ve just been a sandbagging ***** all year,” Ricciardo said with a laugh. “I’ve felt better the last three weekends. For McLaren to be on the podium is huge, let alone a 1 – 2. I’m for once, lost for words.

“It went well for me yesterday and even if we got the start, was never a guarantee we’d hold the whole race. To lead literally from start to finish, I don’t think anyone expected that. There was something in me on Friday, I knew something good was to come.”

Norris logged his best career finish in second, and despite missing out on his first win was still all smiles. Having a great season thus far, a runner-up means that for Norris he is one step closer to finally being a grand prix winner.

“We’ve had a pretty awesome weekend.” Norris said. “We’ve been working towards this and we got a 1 – 2 finally. I’m happy for of course Daniel for getting the win. You want to go for it, but I’m also here for the long term, for the team and it could have ended up like the other guys [Hamilton and Verstappen].”

McLaren becomes the fourth team to score a win in 2021, with Ricciardo being the fifth different race winner.

Verstappen maintains his five-point advantage over Hamilton heading into Sochi in two weeks for the Russian Grand Prix.

The Sochi Autodrom will play host to the eighth Russian Grand Prix, the lights are set to go out at 8am EST. Mercedes in undefeated on the streets of Sochi, as Hamilton has scored four wins and Bottas enters the race as the defending winner.

Verstappen and Red Bull will have their work cut out for them, will the drama continue another week? We will all be anxious to find out.