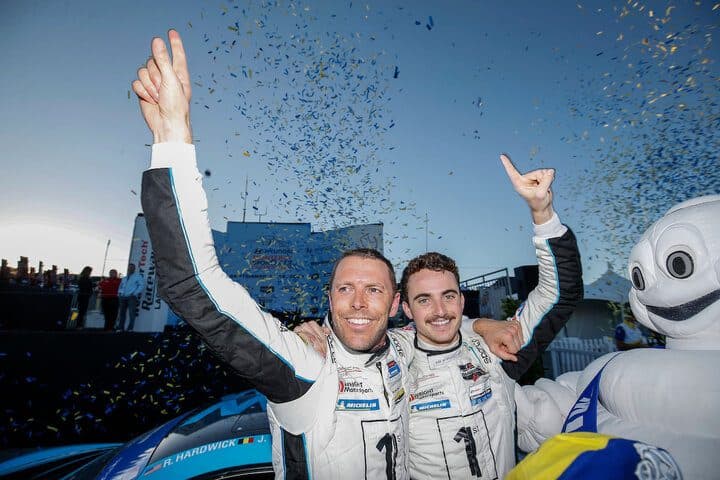 Wright Motorsports’ Jan Heylen and Maxwell Root benefitted from Turner Motorsport’s Bill Auberlen cutting his right rear tire with 40 minutes to go. That gave Heylen the lead that he would not relinquish as Wright Motorsports won the WeatherTech Raceway Laguna Seca 120 Saturday (Sept. 11).

“I always start each [race] thinking that [winning] could happen,” Heylen told NBC Sports’ Brian Till. “Today was just a good day. Super nervous there at the end. Definitely used up my tires a little more than I wanted to chasing Bill [Auberlen]. I really took it easy in the last half hour. [Maxwell Root] did an awesome job as well.”

Root drove Saturday in place of Ryan Hardwick for the second time this season. This time, it was because Hardwick tested positive for COVID-19 and has to sit out. Much like back at Sebring in March, Root qualified the No. 16 Porsche on pole and attempted to open up a gap on the field. Dillon Machavern in the points leading No. 95 BMW was close in tow.

Within the first 15 minutes, Root had opened up a three-second lead. Meanwhile, Russell Ward had gotten himself past Machavern to take second. However, he couldn’t do much with Root as the Porsche continued to disappear off in the distance. A mistake by Ward ultimately allowed Machavern to get back by.

Root led until the first full course caution came out 36 minutes into the race when Andrew Wojteczko Autosport’s Orey Fidani slid his McLaren off-course at the Corkscrew and got stuck in the gravel. At the same time, Roadshagger Racing’s Gavin Ernstone lost it exiting turn 6 and nosed into the tires. Ernstone was able to pull away on his own, but Fidani needed the hook. By the time that the safety car had rounded up the field and pits were opened, the 40-minute minimum drive time had been satisfied. That brought everyone to the pit lane for tires, fuel and a driver change.

Heylen was the first driver out of the pits, but PF Racing’s James Pesek took the lead by staying out. It took a little more than a lap for Heylen to get past Pesek’s pink Ford Mustang GT4 to take the lead. Murillo Racing’s Eric Foss followed into second. Auberlen lost some positions on the stop, but wasted no time getting back into the battle. This included a rare three-wide move on the outside entering the Corkscrew.

Within a couple of laps, Auberlen was up to second and right on Heylen’s tail for the lead. Indy Dontje and Foss were there as well.

The final round of stops saw Auberlen pit a little early in an attempt to jump Heylen. The Porsche’s fuel mileage simply wasn’t as good. When Heylen pitted four laps later, Auberlen was able to get past. When the last of the leaders pitted, Auberlen ended up with the overall lead with Heylen right behind.

Unfortunately, it was only a couple of laps after that when Auberlen’s chances of winning went out the window. The veteran racer dropped his right rear wheel exiting turn 5 and appeared to clip the inside of the tire on the back of the curb. This ultimately cut the tire. In the very next turn, the tire went down and pitched Auberlen off-course, giving Heylen the lead back.

With Auberlen out of the equation and nearly a lap down, Heylen ended up with a four-second lead over Foss. From there, he was able to hold on to take the victory.

Heylen and Root’s margin of victory was 4.563 seconds over Dontje and Russell Ward after Dontje passed Ross on the final lap. Alec Udell and Bryce Ward in the second HTP Winward Motorsport Mercedes rose up late to finish third. Foss and Jeff Mosing were fourth, while Archangel Motorsports’ Alan Brynjolfsson and Trent Hindman were fifth in their Aston Martin.

Auberlen and Machavern ended up 14th in class. As a result, his point lead is down to 40 points over teammates Barletta and Foley and 80 over Heylen.

In TCR, Copeland Motorsports’ Tyler Maxson inherited the pole after the fastest qualifier Chris Miller lost his time due to a camber violation. However, it didn’t take long for Maxson to run into trouble.
10 minutes into the race, Maxson collided with the Toyota of Riley Motorsports’ Anton Dias Perera in turn 10. When that happened, Dias Perera cut his left front tire and had to run a full lap on a flat tire before being able to get back to the pits.  He was ultimately done for the day.

Maxson didn’t get off scot-free either. He also cut a tire on his Hyundai Veloster N TCR and was forced to make an unscheduled pit stop. Ultimately, Maxson ended up a lap down before he could even break a sweat.

After Maxson pitted, much of the rest of the race was a duel between Bryan Herta Autosport’s two Hyundai Elantra N TCRs. Ryan Norman assumed the class lead in the No. 98 over Harry Gottsacker in the No. 33.
There were no team orders in play here. The teammates battled each other briskly all through the first stint of the race with Norman just barely able to hold off Gottsacker. Rory van der Steur gave chase in his Veloster.

During the first caution, all the TCR leaders pitted as well. Mark Wilkins in the No. 33 beat the No. 98 of Parker Chase out of the pits, but the Van Der Steur Racing Veloster with Denis Dupont took the lead by beating everyone out. Dupont’s time at the front was short-lived as Chase was able to get past without too much trouble.

After the final stops, Chase and Wilkins ended up nose to tail, much like Norman and Gottsacker were earlier in the race. Unlike earlier, Chase was eventually able to gap Wilkins by a couple of seconds.

However, in the closing laps, Wilkins was able to run Chase back down. With eight minutes to go, Wilkins made a dive to the inside exiting turn 3 for the lead. Chase blocked that move and nearly put his teammate in the dirt.

With two laps to go, Wilkins made another move exiting turn 3 for the lead. Chase tried to block it, but his move came a little too late. Wilkins cleared Chase entering turn 4 to take the lead. From there, he drove away to take the win.

Gottsacker and Wilkins’ margin of victory was 2.303 seconds over Chase and Norman. TCR point leaders Taylor Hagler and Michael Lewis were third after suing a slightly different pit strategy. JDC-Miller MotorSports’ Miller and Mikey Taylor came from the rear to finish fourth, while Dupont and van der Steur were fifth.

Michelin Pilot Challenge teams will take four weeks off. The next race on the schedule is the Virginia Is For Racing Lovers Grand Prix Oct. 10 at VIRginia International Raceway. Frontstretch will be on-site at VIR to bring you all the action.