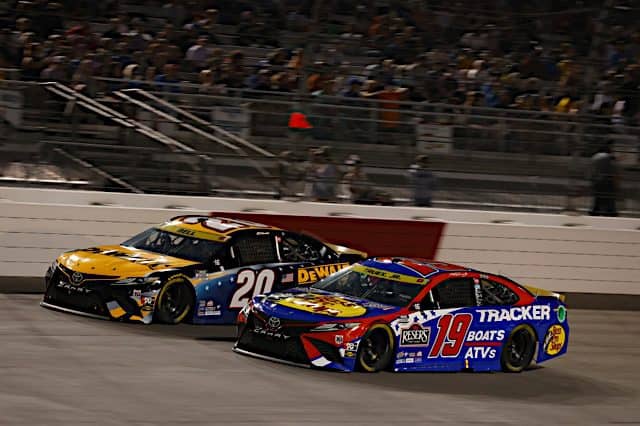 After nearly doing so at the same track a couple of seasons ago, Joe Gibbs Racing’s NASCAR Cup Series stable looked to be on track for a possible 1-2-3-4 finish on Saturday (Sept. 11) night at Richmond Raceway.

In 2019, it was a post-race inspection disqualification of Erik Jones‘ No. 20 that derailed the historic result. This time, it was a speeding penalty for Kyle Busch, who didn’t back it down quite enough while entering pit road on the final round of stops.

Nevertheless, JGR led a whopping 326 laps in the 2021 Federated Auto Parts 400, more than 80% of the scheduled circuits. Outside of the Toyota quartet, just two other teams led laps at all: Hendrick Motorsports led more than 60, featuring Chase Elliott with 58 and Kyle Larson with eight, while Chip Ganassi Racing led eight, with both Ross Chastain and Kurt Busch helming four laps apiece.

The laps led and eventual victory for the No. 19 all came after a bizarre start to the race, where Truex beat polesitter Hamlin to the green flag. He still didn’t seem entirely sure of what happened during his post-race press conference.

“Just two laps after I pitted or whatever, I was like, ‘this is ridiculous,'” Truex said after the race. “‘But I’m already last now, so there’s nothing I can do except for go forward.’

“I don’t really understand what you’re supposed to do in that situation. I let the [No.] 11 get a nose out in front of me to get the launch first. I wasn’t going to jump him, and then he spun the tires and stopped. What am I supposed to do, stand on the brakes and crash the field behind me? It’s ridiculous, but yeah, I got over it fairly quickly because that’s what it was, and we had to go forward.”

Saturday was also the third of the past four weekends in which JGR has landed at least two cars in the top 10; the team had three at Darlington and four at Richmond. After Bell got the Toyota stable its first win of 2021 at the Daytona road course, JGR won four of the next 10 races before a six-race dry spell. That was interrupted by Kyle Busch at Pocono, but from that race onward the team went seven more races without winning. Hamlin snapped that drought at Darlington and Truex kept another dry spell at bay at Richmond in an all-around, purely dominant showing from the team.

Truex also held Hamlin at bay, as the No. 11 closed in but stalled out as the laps waned. Behind the pair, Bell came home third.

“[…] I knew that we’d all be really fast. All the JGR drivers are really good here, Martin’s won a lot, Denny’s won a lot, Kyle’s won a lot, so it didn’t surprise me that all four of us were running up front, and I think that we’re pretty similar in strength too.”

Bell has won three times at the track, all in the Xfinity Series. He swept in 2018 and scored a fall race win the next year.

“It was nice to be competitive and [we] got a great finish out of it,” he said. “We were a little bit off strategy that I think played to our advantage, coming back up through the field.

As for the off-strategy acclimation?

“I was happy with it,” Bell said. “We’ve done that a couple other times throughout the course of the year and it paid dividends, so I felt like it did good until the last stage there and I lost some ground.”

Hamlin has three Cup Series wins to his name at the “Action Track,” and he was gaining on Truex as the laps wound down.

“Just ran out of time,” Hamlin said. “We just needed about two more laps to get there and make it happen, but we just had a couple slow stops under green and that [was] kind of the difference.

“I’m happy about where we’re at,” he added. “[I] thought that it was really encouraging to see all the JGR cars up front, so we’re really trying to get better after last year and so I’m pretty happy with it.”

JGR excelled with the 750-horsepower package on Saturday as a whole.

“Our cars were good and I thought that it did everything it needed to do,” Hamlin said. “Our teammates kind of honed in there in the middle stages of the race and then we got really good there towards the end, so I thought at the beginning of the race, the [No.] 5 and a couple other guys [like] the [No.] 9 [ran] up towards the front. I’m like, ‘looks like they got something really good,’ but as the track rubbered in they faded and we got better.

Truex’s crew chief, James Small, said it was less a difference in package and, more simply, the track.

“I feel like really it’s been the same all year,” Small said. “It’s just we weren’t very good as a company on the concrete tracks […] like Dover and Nashville. Whatever we had going on there, we kind of missed it compared to some of the other cars, but at the start of the year I felt like as a company we were strong.

“Obviously, the last two races, and then even at Loudon, the [No.] 20 had a really good run. All of us could have had a good run, but we had that incident at the start with the rain and the 11 ran into issues on pit road, I believe. Across the board, I feel like we’re strong. We’ve been working hard, and it’s the bread and butter of the championship is almost 750 races now, so it’s important to be good.”

Hamlin’s frustration, meanwhile, was palpable, but he tried to look at it in terms of points.

“We got 2 more bonus points for the playoffs by winning the stages,” he said. “What I really wanted was the extra five, but obviously we’re doing well, we’re really doing well and better than anyone these 2 races. So I certainly am happy and can’t be too disappointed with second place finish, but I hate coming from so far back and getting there and [then] the race is over.”

Possible spoiler: Joe Gibbs Racing is very, very good at Bristol as well. That’s where the series goes this coming week, with the green flag set for Saturday (Sept. 18) at 7:30 p.m. ET.

I watched for a while but got tired of the Baby Busch movie and watched the Blue Jays.