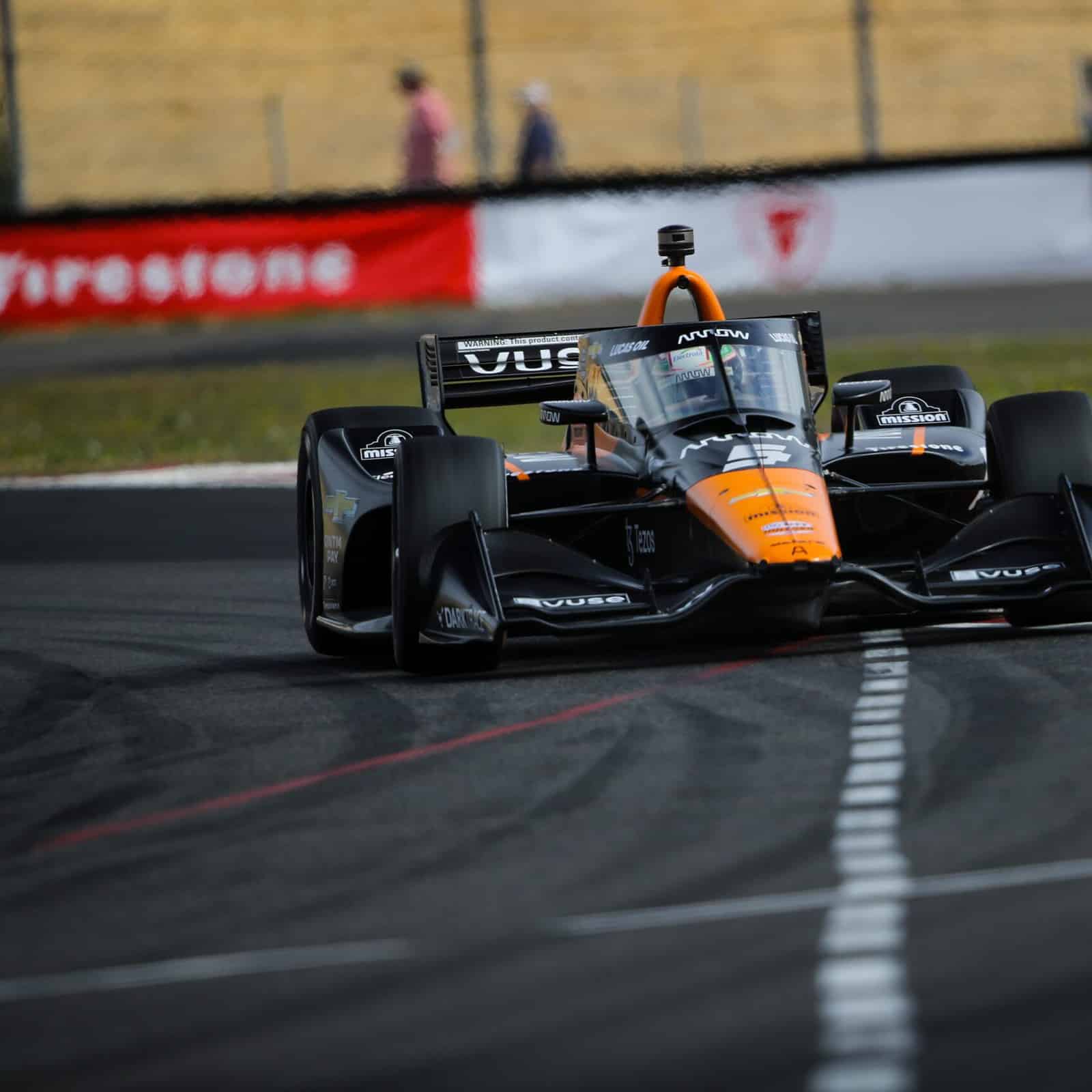 Pato O’Ward‘s slim lead in the 2021 NTT IndyCar Series standings disappeared after Sunday’s (Sept. 12) Grand Prix of Portland when the Mexican racer finished 14th. Up ahead of him, fellow title rival Alex Palou earned the victory, claiming the points lead in the process.

O’Ward started seventh but INDYCAR placed him as the race leader after being the first driver to pass over both on-track scoring loops in the middle of first corner chaos. Behind him after some early contact was Graham Rahal, Ed Jones, Marcus Ericsson and Sebastien Bourdais as the race resumed on lap 10.

The 2018 Indy Lights champion made his first pit stop on lap 29, handing the lead to Rahal. However, O’Ward’s used black sidewall primary tires were not as fast as Rahal’s, and the No. 15 Rahal Letterman Lanigan Racing Honda leapfrogged O’Ward in the pit stop sequence. After the first major pit cycle concluded, O’Ward was in second place, three seconds or so adrift of Rahal.

Everything would change right before the midway point of the race. Almost simultaneously, Dalton Kellett‘s car crawled to a stop in the turn 1 runoff as Callum Illott‘s Juncos-Hollinger Racing Chevrolet also came to a stop on the back side of the circuit. The Arrow McLaren SP team called O’Ward into the pits in anticipation of a full course yellow, which came out shortly thereafter.

While some would expect the field to pit under caution, the only car that went to pit road was the No. 48 Chip Ganassi Racing Honda of Jimmie Johnson. That cost O’Ward valuable track position.

When racing resumed, O’Ward was now 12th while Rahal was still leading, but things would not get easier. O’Ward was on the radio to team president and race strategist Taylor Kiel about not having full power on the straightaways. What was thought to be an incorrect fuel map turned out to be an unexplained technical issue that will require more investigation.

After the lap 56 restart, O’Ward fell to 15th place within five laps and could only get to 11th before his final pit stop on lap 83. After a pair of late-race yellows, O’Ward fell from 13th to 14th and spent the last 18 laps in 14th position.

“Today was obviously very tough,” O’Ward said in a team release. “It just wasn’t our day. We got unlucky with some of the yellows and this race favored the alternate strategy, which you can see when you look at the results. It just goes to show how exciting of a sport INDYCAR is at every race. We gave it everything we had all weekend. The No. 5 Arrow McLaren SP crew was solid on every stop. We are up against some great competitors for the championship but we will come back the next two races and fight down to the last lap in Long Beach.”

O’Ward started the day nine points ahead of Palou but ended the day 25 points behind the Spaniard. He’ll look to turn the tables next weekend at the Grand Prix of Monterey at WeatherTech Raceway Laguna Seca. The next NTT IndyCar Series event will go green on Sunday, Sept. 19th at 3 p.m. ET on NBC.