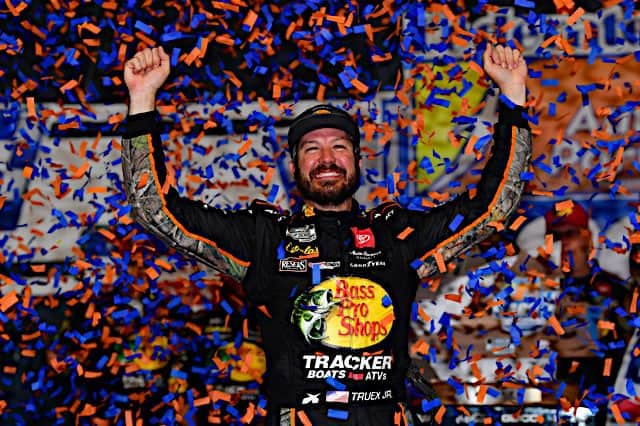 By the finish, he simply had the jump on everyone else.

Truex fought all the way back to the front, opening up an eight-second lead after the final pit stop and cruising to victory over Denny Hamlin in the second NASCAR Cup Series playoff race Saturday night (Sept. 11). The win is the sixth for Truex in the last 13 short track events, clinching his spot in the Round of 12 while snapping a four-month winless drought dating back to Darlington Raceway Mother’s Day weekend.

The No. 19 Toyota driver did it all in the midst of a memorable moment for everyone in America, the 20-year anniversary of September 11.

“It’s an important day in our history,” Truex said. “We’re proud to win… it reminds you of the honor and the privilege it is to get to come out here and do this.”

Hamlin, meanwhile, displayed his Richmond mastery as he won the first two stages of the race, putting himself in position for a second straight win after snatching the Southern 500 last weekend. But Truex slowly worked his way back into contention on a night Joe Gibbs Racing had its cars 1-2-3-4 at one point during the final stage.

By lap 269, Truex had wrested the lead away from Hamlin while Kyle Busch also found himself in the mix. The battle between the trio came down to the final round of stops. Truex pitted three laps earlier than Hamlin, padding himself a lead on fresh tires while Busch took himself out of the mix by speeding on pit road.

Hamlin ran Truex hard during the final laps, cutting the lead down to less than two seconds but ultimately ran out of time.

“Our pit stops were a little slow there,” Hamlin said of the final stage. “Our FedEx team just needed a couple more laps [to run Truex down], that’s all.”

Christopher Bell finished third to complete a banner night for JGR; their cars combined to lead 326 of 400 laps. Chase Elliott, after backing up over the jack on an early green-flag pit stop, fought back from a lap behind to finish fourth. The reigning Cup champion finds himself in much better shape after wrecking out of Darlington in the playoff opener.

“A nice rebound after last week,” Elliott said. “Everything about Darlington was miserable. It was nice to come here and just put together a solid night. I felt like we performed at a really high level that I know we are capable of every week.

“If we perform like that the rest of the season, I think we’ll be just fine.”

Joey Logano rounded out the top five as the highest-finishing Ford in the race. It’s just his second top-five result in the last dozen Cup races.

Pole sitter Kyle Larson ran sixth, charging forward from the rear of the field after a penalty for failing pre-race inspection. Even though Larson started behind the 8-ball, he was in the top 10 within 56 laps and secured a spot in the Round of 12 through points.

It was a somber approach at the start for NASCAR, paying tribute to the 20th anniversary of the 9/11 terrorist attacks. Crew members were seen with American flags displayed on pit road, along with fans in the stands as a fire truck paced the field before the event.

Tonight, teams on pit road and fans in the stands honor the first responders whose bravery and sacrifice carried the nation through a difficult time.#NeverForget911 pic.twitter.com/SJaI7xcJSU

From there, the race was fairly clean compared to the disasters for playoff drivers at Darlington a week ago. The lone exception was Kurt Busch, whose left rear tire went down and caused the race’s most serious incident and second caution of the race on lap 41.

Busch would finish dead last in 37th place, dropping him from fourth to 12th in the point standings.

“After the pit stop, something in the left rear wasn’t right,” Busch said. “The guys said they got the tire tight. They made an adjustment and there was no rub and the left rear let go.”

Brother Kyle also was forced to overcome pit road mishaps. Early in the race, Busch was penalized for “equipment interference,” which is slowing down a competitor’s pit stop with your own equipment. After climbing back up through the field, Busch passed Ross Chastain, who short pitted, for the lead on lap 306.

But Busch made that crucial mistake on the final pit stop, speeding on pit road entry to take him out of contention for the win.

Other playoff drivers, like Aric Almirola, found themselves with unscheduled green-flag stops or below average performances on pit road. Alex Bowman and William Byron, on the bubble after rough starts to the playoffs at Darlington, simply struggled with ill-handling cars. Both drivers finished off the lead lap, in 12th and 19th, respectively and need strong runs at Bristol Motor Speedway next weekend to advance.

The final green-flag run to the finish was 145 laps, leaving just nine cars on the lead lap by the end of the final stage. It’s the lowest number remaining on the lead lap in the last five years of Cup racing at Richmond.

With Truex, Hamlin and Larson advancing, nine more spots remain in the Round of 12. The points battle at the cutline will be intense as there is just a 13-point spread between 10th and 14th place. Kurt Busch and Bowman are currently tied for that final spot but anyone, even 16th place Michael McDowell, can still leapfrog ahead with the right combination of results next weekend.

NASCAR’s Round of 16 finale will come this Saturday night (Sept. 18) at Thunder Valley in Bristol. Coverage of the Bass Pro Shops NRA Night Race at the .533-mile track starts at 7:30 P.M. ET on NBC Sports Network.

The free pass is the rule we love to hate, but it does help drivers who might need a break due to no fault of their own. I’d tell you I liked it better when drivers raced to the caution flag, but we all know that would be beating a dead horse. Besides, someone would call me an old geezer who can’t accept the changing times. 😉