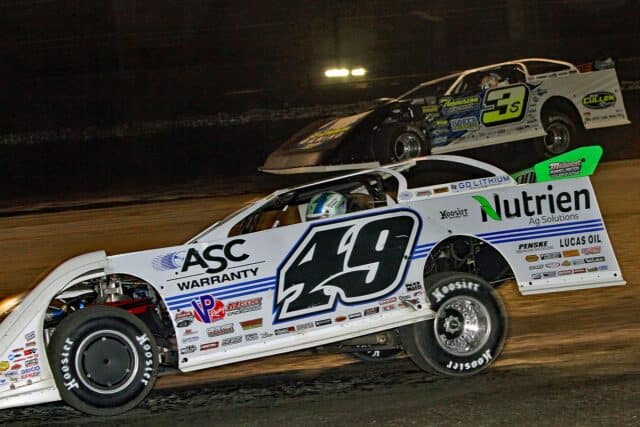 Thursday and Saturday night’s World 100 features both saw a dominant Brandon Overton (who won both Dream late model races at Eldora earlier this summer) assert himself in the mid-race in dominant fashion, only to be challenged on a restart.

Dale McDowell came up short on Thursday, allowing Overton to score $54,000 and his third crown jewel win at Eldora in 2021. On Saturday, Jonathan Davenport finally was able to break Overton’s stranglehold on Eldora, blasting past Overton on a lap 55 restart and able to keep a hard-charging Mike Marlar at bay over the final run to score his fourth career World 100 win, scoring the trophy in a race rescheduled from the pandemic-restricted 2020 season.

Though Davenport and Overton scored the trophies, both feature races were also defined by long-distance hard chargers that kept the closing laps interesting. Thursday night saw current Lucas Oil Late Model Dirt Series points leader Tim McCreadie eat up a deficit of two seconds in the last 10 laps, and had McCreadie been able to dispatch of the lapped car of Ryan King earlier in the feature, he likely had the speed to challenge for the race win. Fellow LOLMDS regular Marlar topped that on Saturday night, going from 26th to second in the feature event.

Four-time World 100 winner Scott Bloomquist made headlines by winning his heat race and earning the pole for Saturday night’s feature, leading the opening 18 laps of the event before bowing out later in the race with engine trouble.

Zack Dohm was disqualified on Saturday during his heat race after making contact with Chris Ferguson under the yellow flag.

It was so nice of Zack Dohm to congratulate you after you ran him over! pic.twitter.com/G56QklNYur

Even though his streak of crown jewel wins was snapped at three, Brandon Overton still was arguably the story of the weekend at Eldora. Scoring both a prelim feature win and the 51st World 100 on Thursday, Overton was greeted with raucous applause during driver intros Saturday night, an ovation loud enough to give credence to Overton’s claims that the Eldora crowd was keeping his t-shirt folks busy.

Having said that, Overton was knocked from the pedestal at Eldora Saturday night, and it came courtesy of the driver he’s supplanted at the top of the super late model hierarchy this summer, one Jonathan Davenport. As fellow late model driver Randy Weaver noted during Flo Racing’s post-race coverage, all the Overton talk during this week overshadowed the fact that Davenport, one of the most accomplished drivers in the history of the sport, is in a career-year of his own and has scored no share of big-money wins in 2021. The title of top late model driver in the state of Georgia, let alone the country, is well in dispute thanks to the Fast 49’s win.

7 years, 4 globes. ?@TheFast49 took the lead on Lap 55 from Thursday’s Feature winner @Boverton76 and drove off, leading the final 45 laps to win the 50th #World100. pic.twitter.com/7PDQLBSJDg

Mike Marlar going from 26th to second in a World 100 feature was impressive enough. That he did it coming from a 17th-place starting position in a B-main after getting collected in Tyler Erb’s spin during a heat race that cost him a transfer spot made it even more so.

Statistically, Marlar’s charge in Saturday’s feature was the biggest move forward of the weekend, but the overall hard charger award if there was one would go to one Tim McCreadie, who it just so happens is still leading Davenport in the LOLMDS standings. McCreadie went from ninth to first to win his preliminary feature Wednesday night, the farthest any driver all weekend came from to win in a prelim. Saturday night saw McCreadie go from 18th to the top five in the feature.

Bobby Pierce, who holds the distinction of being the youngest winner in World 100 history, made headlines Thursday morning for being barred from racing in Thursday’s edition of the event after a member of his team was suspended for an altercation with a track official.

Comments from Bobby Pierce regarding his disqualification from tonight’s events at Eldora: pic.twitter.com/4qgOQjQiNW

Though nothing was officially reported, there were repeated Facebook posts from the track that indicated the “altercation” came courtesy of the crew man driving a four-wheeler around the Eldora campus after curfew. Coupled with Pierce’s car breaking down inside of 10 laps to go in Saturday’s feature, there’s only one word that can be used to describe the driver of the Scooby Doo car’s weekend: “Zoinks.”

Travis Stemler endured arguably the hardest wreck of the weekend during the second B-main Friday, spinning himself out on a restart in turn 4 and slamming sideways into the sand barrels at pit road entrance.

Saturday was a bad night for drivers named Erb, even if they aren’t related. World of Outlaws late model regular Dennis Erb Jr. cut a tire and failed to finish his B-main while running in a transfer spot. Tyler Erb got it even worse, spinning out while in a transfer spot during his heat race, then falling one spot short of transferring out of his B-main and his “scramble” last-chance qualifier race.

Yes, Southern late model drivers have a well-earned rep for playing rough, but that doesn’t change the fact that Ashton Winger ran all over Chris Ferguson Thursday night.

Ferguson just got flat out dumped by Ashton Winger ??

Some of the featurettes were overly dramatic, and I’ve already commented on some of the hyperbole used to convey the size of the weekend’s crowds. Having said that, Flo Racing’s coverage of the World 100, especially on Saturday, was absolutely fantastic. Dirt racing at-large would benefit from having the same type of production values applied to this week’s Eldora program applied week-to-week at the sport’s largest races, a la college football. At a minimum, it’d be nice to see Flo Racing’s Twitter page post as many video clips as it did from Eldora this weekend every weekend. That type of racing will sell itself.

The restart penalties that dotted Wednesday’s preliminary races were not seen during the rest of the weekend’s program at Eldora, but the consequences of race officials’ hardline stance on drivers staying in tight double-file formation coming to restarts were seen on multiple occasions, both with Stemler’s wreck Friday night as well as in the second and fifth heat races Saturday night, where leaders spinning their tires caused accordion-type wrecks. The intent of this rule is understandable, as Eldora’s racing surface is extremely wide, even for a dirt track, and giving drivers free reign as to their lane to start in would give advantages not commiserate with starting position.

World 100 Race Director Erik Grigsby gives us some insight on the penalties given out during Wednesday's racing action at Eldora. pic.twitter.com/ImHB5wWu1E

Having said that, it seems like the same objective could be achieved not by mandating tight restart formation, but prohibiting drivers from passing prior to crossing the start/finish line. Reduce the competitive advantage but allow racecars to spread out. Food for thought, not a complaint, as the Eldora officials were exceedingly consistent across all four nights of racing.

And speaking of those officials, I give Eldora all the credit in the world for disqualifying Dohm after he made contact with Ferguson under yellow during Saturday’s heat races. For one, I always have been and always will be adamantly opposed to drivers using their cars as weaponry under yellow-flag conditions. The yellow being displayed means track officials and rescue workers are at work on the racing surface, and drivers owe it to those without 2,400 pounds of metal surrounding them to behave themselves when they’re on track.

But more importantly, it would behoove dirt track officials at any level to put a stop to this type of battering-ram behavior simply because the entire sport remains at the mercy of a tire and parts shortage (the tire shortage led to the FASTRAK championship race at Virginia Motor Speedway next weekend being canceled, while demand for engine rebuilds has parked some late model drivers for months this summer). Damaging or destroying racecars is more consequential now than ever, not just from a budget perspective, but from a “can we replace what’s broken” perspective.

If there’s a word to describe Eldora’s officiating this week, it was disciplined. Rules were rules. Stepping out of line on restarts was punished. Pierce’s team. having crew member acting like a high-school student was punished. Dohm using his racecar as a weapon was punished. Unfortunately, that sort of discipline is a necessity it seems, even in the dirt racing “family” after watching events unfold at Friendship Motor Speedway unfold Saturday night, where an amateur ATV race as part of the weekly racing program ended up in literal gunfire.

Just had a shooting at our HaPpY PlAcE!! 2 people shoot and the race cancelled!! It was going to be a good night to!! Dang fools!!!

Fortunately, the purported victim who was shot in the head has since posted to his Facebook page that the bullet only grazed him, but this is a stark example of why fighting, rubbing is racing, etc., can’t be tolerated like the good ole days. Relying on sportsmanship, a modicum of self-control and fellow competitors, neighbors, etc. doing the right thing is a fool’s errand in 2021.

5 – yellow flags brought out by Chris Nash during the week’s program at Eldora.

Where it Rated (on a scale of one to six cans with one a stinker and a six-pack an instant classic): We’ll give the weekend four and a half cold Eldora Toilet Waters. Both features teased at great finishes without them actually coming to fruition, but both races produced multiple green-flag lead changes, and seeing Davenport battle back to get the best of Overton was a great storyline. Plus, this exchange from Thursday night’s feature is about as good as oval-track racing of any kind gets.

Is this even real? #World100 ? pic.twitter.com/EN4UHpRIlg

Up Next: The coming midweek continues the big-money parade, with the USAC national sprint car series contesting a $20,000-to-win feature at Huset’s Speedway Sunday, and Monday bringing the kickoff night of the Texas Dirt Nationals. Coverage can be found on Flo Racing and RaceXR+, respectively.