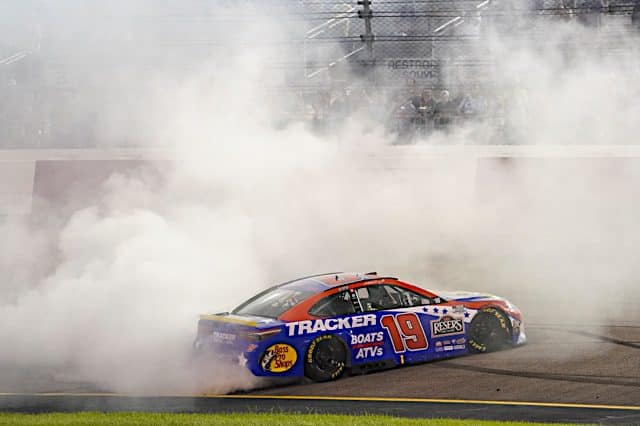 Who … should you be talking about after the Federated Auto Parts 400?

Joe Gibbs Racing as a whole demolished its competition on Saturday (Sept. 11), leading 326 laps as a team and running 1-2-3 at the finish. Martin Truex Jr. claimed the victory, his third in the last five Richmond Raceway events, and the night race could’ve easily ended with JGR running 1-2-3-4. A speeding penalty set Kyle Busch, who appeared to be on pace for such a run, back as he finished near the tail end of the top 10 in ninth.

Truex has been quiet for the majority of the middle of the season, a four-month stretch where he failed to record a win after reeling off three triumphs in the early months. Crashes and generally mediocre runs peppered his summer stretch. Even when the No. 19 ran well, it wasn’t a flashy, show-stopping performance that landed him in the top five or 10.

It’s the Gibbs group and, in particular, Truex and Denny Hamlin, that have kicked off the playoffs in top form. Truex finished fourth at Darlington Raceway – again, a quiet fourth – and first at Richmond. Hamlin won the first playoff race and was the runner-up on Saturday night.

Some of this recent trend can be attributed to the drivers’ success at those tracks, with the Hamlin-Truex duo having multiple wins at both circuits. However, Christopher Bell had a great rebound from a dismal Darlington. Busch was on track to do the same and still scored a top 10, although the pit road penalty put a damper on what could have been a round-advancing win.

The parity in this season, with early showings from JGR and then the spring-to-summer stretch dominated by Hendrick Motorsports, has been incredibly palpable. Fourteen different winners in the regular season, with a 15th in Hamlin tacked on last weekend, means there’s been a different winner in more than half the races.

Hendrick took a while to get going, with defending champion Elliott the last of the quartet to get a win. But once he visited victory lane, things took off even more. Kyle Larson‘s early-March victory was the sole triumph for HMS until mid-April, when Alex Bowman won at Richmond. Then, the 1-2-3-4 finish for Hendrick at Dover International Speedway kicked off that six-race team win streak during the summer stretch.

Could a win for Hendrick at Bristol Motor Speedway send them on another run, where three or maybe even half of the drivers in the Round of 8 are from Mr. H’s stable? Simultaneously, JGR is on a tear at the moment and that entire Toyota group is solid at Bristol.

Team Penske, meanwhile, has been largely quiet this season outside of Ryan Blaney‘s recent success, while Stewart-Haas Racing, Richard Childress Racing, Chip Ganassi Racing and Front Row Motorsports have half of their stables (just one car each for three of those teams) in the playoffs but on the ropes as the series heads to Bristol.

Where … did the other key players wind up in the Federated Auto Parts 400?

William Byron had the worst run of any playoff driver that didn’t run into major issues, finishing 19th despite a top-10 effort at Richmond in the spring. Bowman, Brad Keselowski, Aric Almirola and Tyler Reddick also ended up outside the top 10.

Sitting in 10th? None other than Blaney, who is notoriously subpar at Richmond but scored his first-ever top-10 finish there on Saturday, saying after the race that he “had fun” with a laugh. Chase Elliott bounced back from a disastrous pit road gaffe to finish in the top five but could’ve been in contention for the victory if not for that. The rest of the playoff drivers had top-10 runs, with Joey Logano grabbing a quiet top-five result.

Ross Chastain was the lone non-playoff driver inside the top 10, finishing seventh after an impressive third-place finish at Darlington last week. The No. 42 team continues to pick things up as of late and could throw a wrench into the playoffs in terms of winning a race.

When … was the moment of truth in the Federated Auto Parts 400?

The final round of pit stops came under green flag conditions and set the tone for the rest of the race amongst three Gibbs cars. Truex pitted early and that allowed him to build a lead over Hamlin, while Busch’s speeding penalty dropped him back out of contention for a top-five result.

Pitting early gave Truex fresh tires, a boon at Richmond. He must have been watching earlier in the afternoon on Saturday, when the Xfinity Series race featured a wildly entertaining stage one finish. Tommy Joe Martins, on fresh tires, sliced his way through the top 10 and caught leader AJ Allmendinger with just a few laps left. Martins’ No. 44 worked on the No. 16 and eventually got around him, but Allmendinger was able to steal the stage win at the start/finish line.

Though that strategy just missed working out in the best possible fashion for Martins, a fellow Martin – though his first name rather than surname – made it work later in the evening and did it to win the race.

The Cup Series heads to Bristol for the final race of the Round of 16, with all four drivers below the cutline feasibly able to secure a spot in the next round in one fashion or another. For McDowell, it’s a must-win scenario; his crash at Darlington and trifecta of Richmond speeding penalties put the No. 34 team in a deep, deep hole to dig out of.

Reddick and Byron both sit less than 20 points back of the cutoff, though the pair’s finishes the past two weeks have left something to be desired. Bowman and Kurt Busch are tied for the transfer spot, with the elder Busch holding the tiebreaker. But one slip-up at Bristol could cause Almirola or Kyle Busch, both within eight points of the cutline, to drop below and keep from advancing.

Bristol has a penchant for chaos as the “Last Great Colosseum” and it seemingly never fails to deliver some sort of unexpected playoff drama, though this year is a bit different: the Cup Series hasn’t raced on the standard asphalt. Bristol Dirt, back in the spring, was a brand-new experience, won by Logano, but no normal racing has taken place there this year for Cup drivers.

Last year, Keselowski won the spring race after leaders Elliott and Logano slammed the wall in the late stages. Elliott went on to win the All-Star Race there and Harvick took home the fall event, holding off a hard-charging Kyle Busch. Busch, historically great at Bristol, could make it a JGR sweep of the first round by grabbing the win.

How … worried should some moderately-safe playoff drivers be?

Hamlin, Truex and Larson have all advanced via wins or points. No other driver is fully safe yet, though Logano’s +40 over the cutline should give him some wiggle room. Blaney and Harvick have margins of more than +20, so, barring mechanical issues or a crash, they have a solid chance of advancement. Plus, Harvick got the win last fall at Bristol, so he shouldn’t be too concerned.

Is Nascar’s lack of common sense by committee or just one sole moron ?