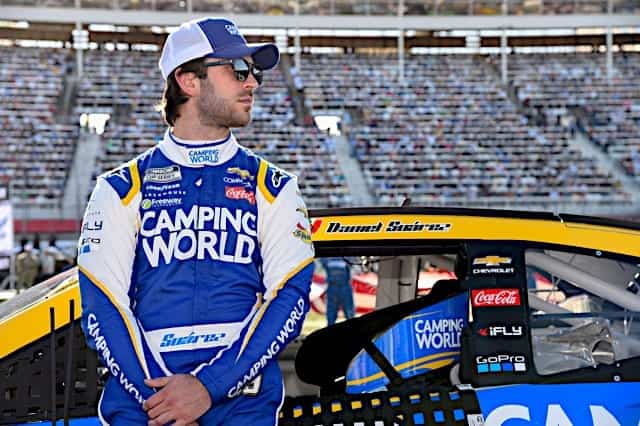 Daniel Suarez had a consistent night at Richmond Raceway, posting a 17th-place finish in the Sept. 11 Federated Auto Parts 400. It was his third straight NASCAR Cup Series top 20, finding his footing again with the No. 99 Trackhouse Racing Team after a dismal summer. But on a rough Saturday, it was the best underdogs could do as they struggled to keep up with playoff contenders over Richmond’s long runs.

“It was OK. We’ve got some work to do,” Suarez said after the race. “I think we were better than that, toward the end with the speed that we had. We were struggling a lot with the rear of the car. We will keep working to keep getting better.”

Extended green flag racing didn’t help matters, as Suarez finished the race two laps down. At one point in stage two, however, Suarez cracked the top 10 despite being a lap behind the leaders. It showed the car had speed at times and legitimized Suarez’s belief that the car was faster, even though he was on fresher tires.

The Monterrey, Mexico native finished 16th at Richmond in the spring race, so while he wasn’t better this time around, there are positives in that Trackhouse has found consistency. As they look to the future, Richmond is a track that the team should have a chance to improve on. Ross Chastain, who will be Suarez’s teammate in 2022, finished seventh and even led for a brief period, giving the team a lot of optimism for its future at the 0.75-mile track.

Suarez was the lone underdog in the top 20, as the attrition at Richmond proved tough for many others. Erik Jones brought home a 21st-place finish, second best among this group. Donning one of the several 9/11 tribute schemes, Jones found himself in and out of the top 20 throughout most of the night. The No. 43 Petty’s Garage Chevrolet appeared to have a fairly good balance during stage two but struggled with handling as the race wore on.

“Decent day for us with the No. 43 Chevy,” Jones said of his performance. “Cool to have the special 9/11 remembrance scheme on the car today. Lost the balance in the middle part of the race and just got a bit behind and couldn’t make it up from there. Looking forward to Bristol [Motor Speedway] next week, my favorite place to go.”

It was a rollercoaster weekend for Ryan Preece in central Virginia.  On Friday night (Sept. 10), he won his third consecutive NASCAR Whelen Modified Tour race at Richmond, leading 98 of 156 laps. The next morning, Preece got the sad news that team owner Ed Partridge, who celebrated with him on Friday night, had passed away.

Last night we won the race.

Last night I lost one of my best friends and modified owner.

In the Cup race, Preece had troubles from the get-go. On a pit stop following the lap 30 competition caution, he radioed in that Kyle Larson had “nailed him.” To make matters worse, the JTG Daugherty No. 37 team was hit with an equipment penalty under an early caution, forced to restart at the tail end of the field. Preece never recovered, finishing 25th, four laps behind the race winner after struggling with forward drive and entry.

Not too many people had an eventful night quite like Bubba Wallace. Wallace was busted for speeding on pit road during the competition caution, also sending him to the back of the field. On lap 40, Kurt Busch’s left rear tire let go, resulting in a hard crash in turns 1 and 2. Wallace hit the rolling tire carcass, puncturing a hole on the right front of the nose and forcing him to pit. Despite all the drama, Wallace drove back up into the top 20 and had a car faster than that on raw speed.

Too bad the comeback was all for naught.

On lap 250, Wallace was entering turn 1 when he suffered a tire failure. The No. 23 DoorDash Toyota smacked the wall hard, causing significant damage to his Toyota. Wallace’s team was able to get him back out on track to finish the race, but the Mobile, Ala. native limped to a 32nd-place finish.

There was good news and bad news for Michael McDowell. The good news? He finished the race, much different than last week’s Southern 500 at Darlington Raceway, where he crashed in stage one. The bad news? The result wasn’t too much higher, as McDowell ran a disappointing 28th. Sitting 16th in the standings, 38 points behind the cutline, McDowell will need a lot of trouble from playoff drivers at Bristol next weekend to advance.

Pit road was treacherous for the No. 34 Love’s Travel Stops Ford. In stage one, McDowell actually flirted with the top 15 until a pit stop where McDowell was boxed into his spot, causing him to lose several positions. From there, the balance of the car went away. Adding to his issues, McDowell was caught speeding three times, something you definitely cannot do in the playoffs or during extended green flag runs.

The Phoenix, Ariz. native does have one top 10 to his credit at Bristol, but it will take a lot more than that to move on into the Round of 12.

I had the privilege to attend Saturday’s races at Richmond, and the 9/11 remembrance throughout the day was absolutely special. A Wall of Remembrance displayed the names of the victims on that fateful day, while a piece of the frame from the World Trade Center was featured at the track. A parade lap for first responders, a gigantic American flag on the frontstretch and recognition of the victims during laps 9 through 11 were just a few of the patriotic events of the day.

One of the most surreal moments was when fans all around the track waved American flags, resembling the same American pride shown on Sept. 23, 2001 at Dover International Speedway.

Shoutout to @nascar and @RichmondRaceway for the excellent prerace ceremonies last night. Great way to honor first responders and remember those lost on 9/11. pic.twitter.com/8BOI2tF7GF

One particular team has a unique 9/11 story of its own. JD Motorsports’s Vice President of Sales and Marketing, Tony Priscaro, was an eyewitness of one of the events of that tragic day.

When United Airlines Flight 93 became one of the four planes hijacked on September 11, the passengers took some of the most heroic actions in American history. Forty citizens rushed the cockpit of the plane believed to be headed toward the United States Capitol in Washington, D.C. The actions of these citizens brought the plane down, and they sacrificed their own lives for possibly hundreds in Washington.

Priscaro was just a few miles away from the Shanksville, Penn. field where the plane went down.

“I personally witnessed the plane fly overhead and eventually crash,” Priscaro said in a team release this week. “That traumatic experience is embedded in my mind forever.  I was one of the first persons to arrive on the scene, even before any fire and rescue authorities.  I will never forget what I [saw].  It was definitely not the scene of a plane crash but just a giant crater.  I spent the entire day at the scene doing anything I could do to help.”

JD Motorsports honored the 9/11 victims with a special scheme on Jeffrey Earnhardt’s No. 0 ForeverLawn Chevrolet.

Today we honor all the men and women that lost there life’s on that sad day twenty years ago. Y’all be sure to tune in to @NASCARonNBC at 2:30 and cheer for the @ForeverLawn https://t.co/o1woDGI0BL number 0 car. #nascar #remember911 pic.twitter.com/Fpqkp4X6Uw

Normally, I pick the Cup scheme that stands out to me the most. However, this week will feature a twist. In honor of 9/11, I will highlight the underdog schemes that paid tribute to those we lost in a collective “schemes of the week.”

Our next race with @teamlivefast will be on Halloween at Martinsville. #KeenParts Cleves, Ohio ?? pic.twitter.com/wLNTowFTJy

It’s Bristol, baby! For the fourth straight week, the NASCAR Cup Series will race under the lights, this time at the .533-mile oval in Thunder Valley. The race marks the Round of 16 finale and McDowell’s last chance to make the Round of 12.

The NASCAR Xfinity and Camping World Truck series also head to Bristol this week. It will be the last regular season race for Xfinity drivers, giving someone like Brandon Brown one last opportunity to pull an upset and sneak into the postseason.

It also will serve as the last race of the Round of 10 for the NCWTS, as Niece Motorsports’ Carson Hocevar looks to advance to the Round of 8.

Tonight, teams on pit road and fans in the stands honor the first responders whose bravery and sacrifice carried the nation through a difficult time.#NeverForget911 pic.twitter.com/SJaI7xcJSU

P21 at Richmond. We just struggled to get our @PettysGarage Chevy right during the race. Most of all, honored that I got to run this paint scheme in remembrance of those who lost their lives on 9/11. #NeverForget ?? pic.twitter.com/pfWDHY8JqY

Looking forward to The Last Great Colosseum next weekend ? pic.twitter.com/VJF4P2dSXJ

All of bubba’s teammates finished near the front. What is he doing wrong !

There is an electrical problem in the 23. A short circuit between the head rest and the steering wheel.