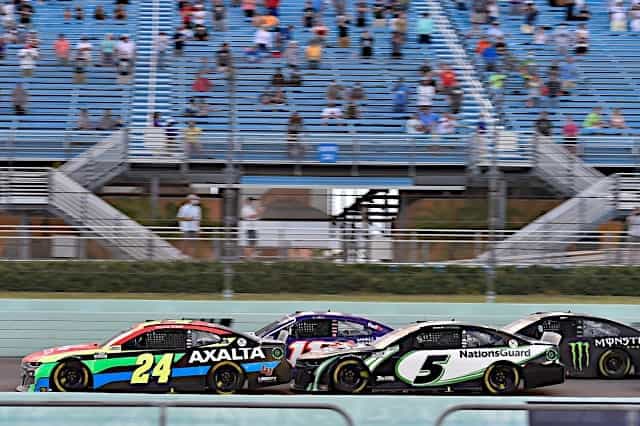 Earlier in the 2021 NASCAR Cup Series season, Hendrick Motorsports looked like the team to beat as all four of its drivers had won a race by Memorial Day.  Kyle Larson was particularly impressive, winning three races in a row plus the non-points All-Star race.  But William Byron, Alex Bowman and Chase Elliott all had their moments in the sun.

Larson’s winning streak was part of a larger period in which Hendrick earned six wins in a row, including a 1-2-3-4 finish at Dover International Speedway.  Each team looked capable of making a deep playoff run.

But, as usual in the world of NASCAR, things change and momentum shifts.  With the playoffs underway and just one race left in the first round, only Larson is guaranteed to move on.  The fates of Byron, Bowman and Elliott hinge on their performances at Bristol Motor Speedway on Saturday, Sept. 18.  Suffice it to say that the Hendrick drivers’ playoff battle is beginning earlier than most would have expected.

Bowman and Byron find themselves right in the thick of the points battle to advance.  Bowman is tied for 12th with Kurt Busch, though Busch currently holds the tiebreaker thanks to a sixth-place finish at Darlington Raceway.  Byron is 15th overall, 18 markers below the cutline, trailing every other playoff driver except for Michael McDowell.  That is not a desperate situation for Byron, who can escape elimination with a top-10 finish and lots of stage points at Bristol.  But for a team that earned 11 consecutive top 10s early in the season, this is not the start to the playoffs for which Byron and the No. 24 crew had hoped.

Even Elliott has had a difficult start to the playoffs.  The defending champion came into the postseason with more playoff points and a little more momentum than Bowman and Byron.  However, Elliott and the No. 9 team had been prone to mistakes in recent weeks.  That trend has continued into the playoffs.  After crashing at Darlington, Elliott had a good run going at Richmond Raceway until mistakenly backing his car off the jack during a green flag pit stop.  Instead of resuming his battle with Denny Hamlin for the race lead, Elliott wound up fighting with Hamlin just to stay on the lead lap after losing so much time in the pits.

Hendrick’s results at Richmond were pretty mixed.  Elliott did manage to recover for a top-five finish, placing him 19 points above the cutline and seventh on the grid.  Larson had to start at the back of the field and raced to sixth place, a much better result than the No. 5 team’s difficult afternoon at Richmond back in April. But Bowman, the winner of that April Richmond race, had to fight hard just to finish 12th on Saturday night (Sept. 11).  Byron was a non-factor and ended up 19th.

Most would have thought all four Hendrick teams would at least reach the second round of the playoffs just a few weeks ago.  Now, there is a good chance that at least one of them will be knocked out of the playoffs at Bristol.

That’s an experience Byron knows all too well.  Last season, the No. 24 team came to Thunder Valley after a similar mid-pack finish at Richmond.  Byron was below the cutline, but only by three points.  He had also scored three straight top-five finishes prior to Richmond, including his first career win at Daytona International Speedway. The stage was set for a Cinderella run deep into the playoffs.

It didn’t happen. Bristol delivered nothing but heartache for Byron when he crashed into the back of another car after a lapped driver caused a stack-up.  The No. 24 got the worst of the damage, knocking Byron out of the race and the playoffs.  It was a brutal reminder for the young driver things happen fast on the concrete high-banks.

Bristol typically has not been kind to Bowman, either.  He last scored a top 10 there in 2018, his first season driving for Hendrick full-time.  In fact, last year’s Night Race was one of only three playoff events where Bowman did not score a top-10 result.  If he and the new No. 48 team want to make another deep playoff run, they must have a better performance.  The same goes for Byron, who has only one top 10 at Bristol in six career starts.

The drivers Bowman and Byron will have to beat make their path even more difficult.  Kurt Busch has won six times at Bristol, the most recent coming in 2018.  Few active drivers can match his level of experience at Thunder Valley.  Tyler Reddick is just the opposite, a first-time playoff participant with only two previous Cup races at the track.  But Reddick did finish in the top five in last year’s Bristol night race.  He should not be underestimated as a playoff spoiler.

Moving further up the grid, Aric Almirola’s record at Bristol admittedly isn’t frightening, but Kyle Busch’s certainly is.  With eight wins and 19 top 10s in 31 starts, the younger Busch brother is probably the last person you would want to race for a playoff spot there.  He, along with Brad Keselowski and Christopher Bell, will provide some tough competition for the Hendrick drivers.

If Byron and Bowman can survive Bristol, they could be primed for success later in the playoffs when the schedule shifts back to intermediate tracks.  Elliott should be fine if he avoids mistakes, but that has proven to be a challenge for the No. 9 team lately.  An elimination now, for any of them, would be a serious disappointment considering how strong HMS looked earlier in the season.

Yet success in NASCAR’s playoffs has always required good timing.  The Hendrick organization should know that as well as anyone, considering its past success with Jimmie Johnson.  To keep all four of its drivers in the game, HMS will have to find more of that postseason magic Saturday night.

It’s not just the playoffs, Elliott & his team have seemed to be a tick off for the whole season. Not as bad as Kyle Busch, last years defending Champion, but noticeable.

It “IS” a desperate situation for Byron. I don’t see him or Bowman making it to the next round. And Chase and team continue to be off their game. Look how many times he’s had a start at the back this year.