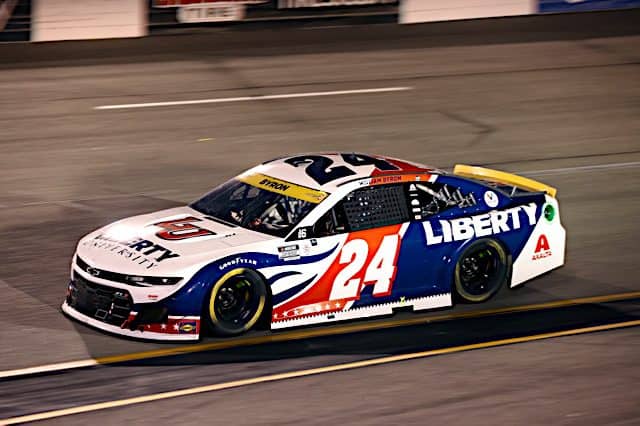 In a season that’s been his best statistically, William Byron now faces a steep uphill climb if he wants to contend for the 2021 NASCAR Cup Series championship.

Following a 19th-place finish at Richmond Raceway, the Hendrick Motorsports wheelman now sits 18 points below the cutline heading to Bristol Motor Speedway. 15th in the standings, he’ll need to leapfrog three drivers or win his second race of the year to advance out of the Round of 16.

Byron was hoping to replicate the success that came with the No. 24 team’s seventh-place finish back in the spring here. However, he struggled to maintain competitive pace over the 400-lap event.

“Really bad,” Byron said of Saturday night’s (Sept. 11) Federated Auto Parts 400.”Felt like we had something decent [from the spring], made some some tweaks and stuff to try to get a little better and we were terrible. I think the best we got to was 11th one time.”

Expectations going in did not meet reality once the green flag flew, as the freefall was slow and steady through the field and behind his playoff counterparts.

“I thought we could run top 10, maybe 12th on our worst day,” he added. “And we were awful. We were just really bad, I was really bad and it was all terrible.”

Byron went a lap down at the end of stage two and failed to score the free pass, with Hendrick Motorsports teammate Chase Elliott getting by with a couple circuits remaining in the frame.

“That was that was a big turning point, for sure,” he said. “If we got the track position, we would have kind of been able to maintain it but we weren’t able to hold off the No. 9 at all. He was way quicker and I just couldn’t do much.”

From that point forward, handling gremlins reared their ugly heads and Byron’s chances to move up started slipping away. Long green-flag runs in the final stage kept the Hendrick Motorsports youngster from racing back onto the lead lap.

“Everything,” he said when asked what he was fighting inside the car. “Just lack of grip. It seemed like some runs, I could run with the No. 2 (Brad Keselowski) and the No. 12 (Ryan Blaney) and then some runs, I was like a lapped car and way off the pace. I don’t know. I was tight center to start the race, thought we got some more drive in the car, I thought that was kind of making us faster. And then that kind of ran out too, and we were just in the way.”

See also
Richmond Rout: Martin Truex Jr. Gets The Jump On The Field In The End

Headed to Bristol where Byron has one career top-10 finish (2020), he’s adopting an aggressive mindset. Forget strategy or pointing his way inside the top 12.

There’s just one surefire way to make sure you advance at Thunder Valley: reach victory lane.

“Try to race our ass off and see if we can maybe win the race,”Byron exclaimed. “That’s pretty much probably what we got to do. It’s an OK track for me. I feel like we’ll have a much better car there, so we just got to get there and race as hard as we can.”

The final race of the Round of 16, the Bass Pro Shops NRA Night Race, is scheduled to go green Saturday, Sept. 18 at 7:30 p.m. ET with TV coverage provided by NBC Sports Network.