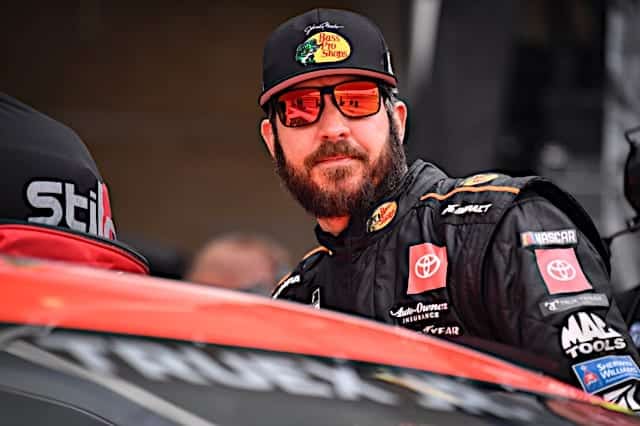 Much of the championship talk has centered around Denny Hamlin and Kyle Larson, the most dominant duo in the Cup Series this season. Larson has been a winning machine and Hamlin mind-bogglingly consistent. But while those two are at the forefront of most minds as they pursue their first Cup crown, a former champion reminded everyone that it’s far from decided.

Hamlin stole the show early Saturday night at Richmond, but it was Martin Truex Jr. holding the trophy at the end of the contest. The 2017 titlist led only one lap during the first half of the race but paced the field for 79 of them in the second half, including the final 51.

For Truex, it marked his first trip to the winner’s circle since the spring trip to Darlington back in May. It is his fourth win of 2021, giving him sole possession of the second-highest total this year. It’s also the fifth time in the last six years that the popular Joe Gibbs Racing star has claimed at least four checkered flags in NASCAR’s premier division.

Speaking of Truex and his championship aspirations, it’s almost a little surprising that he only has one title. The JGR veteran has been one of the Championship 4 in five of the past seven years, yet his 2017 triumph still stands as his only victory in this “survival of the fastest” format that has been used to determine the champ since 2014.

Hamlin and Truex stole all the headlines, but JGR actually swept the top three positions at Richmond. Christopher Bell followed his teammates across the finish line in third, a career best for him at the Virginia short track. Kyle Busch came up five spots short of completing the top four sweep, but after last week at Darlington, ninth doesn’t seem so bad for the No. 18 team.

After the misery inflicted by the Lady in Black during the previous outing, Richmond broke a lot fewer playoff hearts this week. Only two of the 16 playoff contenders failed to finish in the top 20. Michael McDowell struggled again, finishing 28th, which means that without a win at Bristol next week, his title hopes are finished. Kurt Busch was the only crash victim, as an early wreck left him last (37th) in the final rundown.

Joey Logano continued his remarkable consistency at Richmond with a fifth on Saturday. Since taking over the Team Penske No. 22 in 2013, Logano has finished 11th or better in 15 of his 17 starts on the .75-mile, D-shaped oval. Mixed in to that assortment are two wins and 10 top fives, punctuated by his result in this most recent outing.

Ross Chastain again made waves this week, as he landed in the top 10 for the second week in a row, the lone driver not in the playoffs to do so. Interestingly enough, Chastain has never finished three consecutive Cup races in 10th or better, so it’ll be worth keeping an eye on him at Bristol to see if that changes.

From 2000 through 2009, every Cup Series race at Richmond had at least eight caution flags, lending to the speedway being dubbed “The Action Track.” However, since the 2010 season began, only five races at the venue have seen the yellow flag wave more than eight times, and cautions for anything besides stage breaks have become almost rare lately.

None of the Team Penske drivers led a lap at Richmond, marking the fifth time that such has happened in the past 12 races. Brad Keselowski, Ryan Blaney and Logano all failed to lead at least one lap at Sonoma, Nashville, Atlanta and Road America, in addition to Richmond.

After going through nearly the entire regular season without a win, Noah Gragson has now won two races in the Xfinity Series in 2021. Gragson backed up his Darlington victory with a second consecutive triumph last Saturday. With that tour about to begin its postseason after Bristol, the JR Motorsports driver will be in a much more favorable position to chase the Xfinity Series championship.