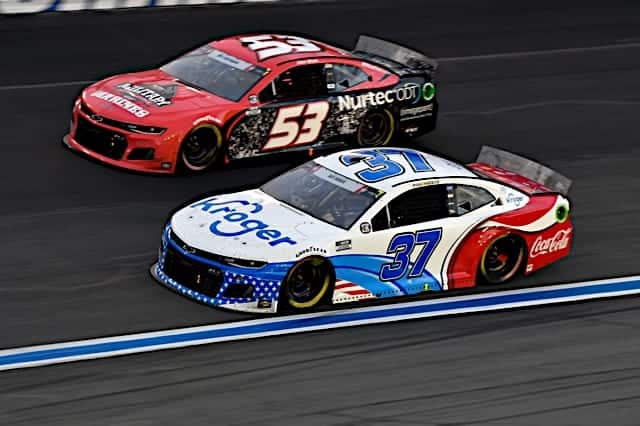 With the NASCAR Cup Series playoffs in full swing, you’re forgiven if you have limited your attention to the 16 eligible drivers.

But there are other points battles happening behind them you ought to know about — a point hammered home by Reddit user u/1-800-DADJOKE.

That person has been keeping a watchful eye on the war for points that carry serious financial implications at year’s end and has contributed recent posts on r/NASCAR that illustrate exactly what’s going on back behind 20th place in both the Cup and Xfinity series.

The "Other" Points Battles: After Richmond 2 from NASCAR

Let’s start with the battle for a spot in the top 25 in Cup — an incentive that comes with a $1 million bonus at the end of the season ¯ and begin with those on the outside looking in.

Erik Jones and Ryan Preece may not be having career years in their respective rides, but what a difference a couple spots in the point standings could make if they could find themselves P25 or better following the championship race at Phoenix Raceway.

It’s not a secret that Jones and Richard Petty Motorsports don’t have a plethora of sponsorship available at their fingertips. Six points outside the top 25 with eight races to go, $1 million would go a long way as the team prepares to switch to the Next Gen car in 2022 with every other Cup team.

Well, most Cup teams. Preece’s No. 37 team out of JTG Daugherty Racing is likely to shut down at the end of the year after team co-owner Brad Daugherty confirmed the team would be scaling back to one car in 2022.

Yes. Would expect Stenhouse to be with JTG next season. https://t.co/3cp3clw6DH

Consider, as well, that Preece has competed all season without a charter to ensure a spot for him in the field every week. With that comes less purse money at the end of every race than those whose rides are chartered. This $1 million bonus would be massive for a program that has spent a lot of money to earn a lot less in 2021.

Now a look at the other side of this cut line: the guys who are currently set to receive that bonus money.

Credit Suarez, then, for taking a team like Trackhouse Racing in its infancy and making it a truly competitive ride right out of the gate.

Yes, their cars come straight off the floors of Richard Childress Racing and have the financial backing of Justin Marks and Pitbull. But to put all the pieces together to compete this year — better than their results would tell you — and in what is essentially a lame duck season with a new car on the horizon, is remarkably impressive. To be in position to claim that bonus money should be viewed as a success in November.

Let’s move on, then, to the less glamorous side of this conversation.

If you’re fortunate enough to own a charter to compete in the NASCAR Cup Series, there is a clause in the charter agreement to make sure you’re reasonably competitive too.

If a team finishes in the bottom three of all chartered cars in three consecutive seasons, NASCAR has the right to revoke the charter from the designated team. To clarify, that doesn’t mean NASCAR will revoke it; it just gives the sanctioning body the option when the time comes.

Well, the time may soon be coming for Rick Ware Racing’s No. 51 team. After sitting in the bottom three in both 2019 and 2020, the No. 51 car sits just two points to the good over its teammate in the No. 53 and four points over another teammate, the No. 15.

This is where it gets a little interesting. RWR tends to rotate drivers around depending on the given week, particularly guys like J.J. Yeley, James Davison, Cody Ware and Garrett Smithley.

How RWR plays this over the next eight will be fascinating to follow, particularly as its equipment doesn’t allow them to race much inside the top 30.

While I certainly don’t intend to imply any funny business will be at play this year, four teams (including one RWR car) were monetarily fined, docked points and handed suspensions for altering the outcome of the 2019 finale at Homestead-Miami Speedway in a battle to be the sport’s top open (unchartered) car and receive a $150,000 bonus.

Money means everything in this sport, and you earn a lot less without a charter. RWR, I’m sure, wants to assure itself that its charter remains in its own control rather than NASCAR’s.

The Xfinity Series has its own built-incentives, starting with an undisclosed bonus that is awarded for teams inside the top 20 at season’s end. On the plus side of the bubble right now sit Josh Williams’ No. 92 DGM Racing team (+2) and his teammate Alex Labbe’s No. 36 team (+1).

In essence, here’s another reason Tommy Joe Martins likely is (and should be) bitter about not winning stage one in Saturday (Sept. 11) afternoon’s race at Richmond Raceway. Because he was slowed by the lapped car of David Starr exiting turn 4, Martins lost the stage to AJ Allmendinger by inches.

Now, Martins sits one point outside the top 20 instead of being tied for the spot. That point could be the difference of more income down the road for the family-owned Martins Motorsports, which will transition next year into Alpha Prime Racing with select drivers.

Then comes the battle for the top 30 in Xfinity points, which has weekly implications on team finances. Each week, teams inside the top 30 receive $8,000 to $10,000 more in purse money.

Right now, the last two spots are claimed by Jordan Anderson Racing’s No. 31 car (+9) and Motorsports Business Management’s No. 66 car (+2). On the outside looking in is Johnny Davis Motorsports’ No. 4 team (-2) and BJ McLeod Motorsports’ No. 99 team.

The No. 4 car’s points have already switched hands with the No. 6 team’s this season as JDM tries to keep both cars inside the top 30, even though its No. 0 car sits 12 points out in 33rd place. BJ McLeod, meanwhile, has seen his car utilized by teams like Stewart-Haas Racing and JR Motorsports to get drivers like Briscoe, Kevin Harvick and Sam Mayer more track time.

These fights for points are happening on a weekly basis. But with such emphasis on each series’ respective playoff battles, these are the races within the race that team after team are chasing.

Sometimes, we need to be reminded why each position on track is so important.