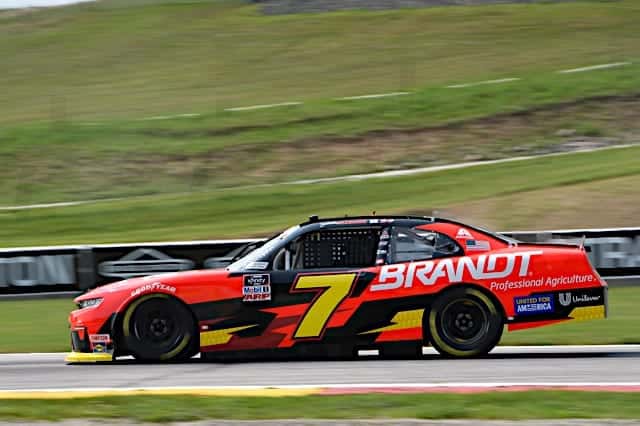 Justin Allgaier and the No. 7 JR Motorsports race team will continue their partnership with Brandt Professional Agriculture for 20 races in the 2022 NASCAR Xfinity Series season, JRM announced Tuesday (Sept. 14) morning.

“I’m really happy to be returning to JRM next year and to keep the relationship going with Brandt Professional Agriculture,” Allgaier said in a team release. “As each year goes by our relationship continues to get stronger and stronger where we feel like we are a family. I’m extremely proud of everything we have been able to accomplish.”

The orange colors of the Brandt brand have adorned the No. 7 Chevrolet of Allgaier since 2016. However, Brandt has sponsored Allgaier before he joined JRM starting in 2011.

Allgaier has won the most races of any driver for JRM, with 13 of his 16 Xfinity career victories coming with the organization.

See also
NASCAR Mailbox: For Most of the Cup Series, 2022 Starts Now

“This business is all about relationships,” Kelley Earnhardt Miller, JRM general manager, said. “We’ve developed an outstanding partnership with Rick (Brandt), Justin (Allgaier) and the entire BRANDT organization over the years. Having BRANDT and Justin back for a seventh season to build on our success is a special opportunity.”

We’ll be back on the No. 7 car as the primary sponsor in 2022 with @J_Allgaier and @JRMotorsports! Read more about the continued partnership here: https://t.co/aL5qajYJAb pic.twitter.com/cOKlLfG7bM

In 2021, Allgaier has locked himself into the Xfinity Series playoffs with two wins at Atlanta Motor Speedway and Darlington Raceway and currently sits third in the points standings.