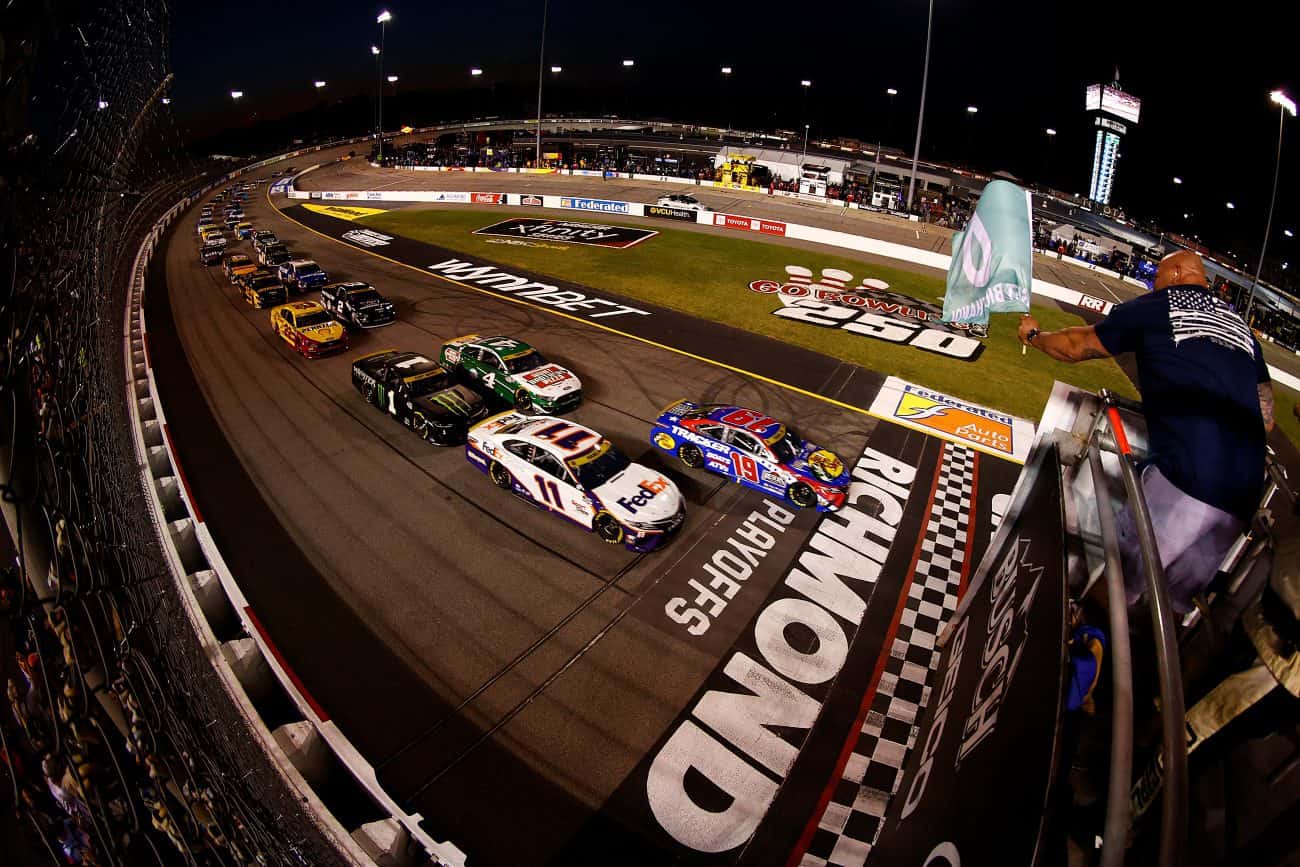 NASCAR released the 2022 Cup Series schedule on Wednesday (Sept. 15) and while the big news of the schedule was that the Clash will race at the L.A. Coliseum next February, there were a few other moves that got the NASCAR world talking.

One of those moves is that the playoff event at Richmond Raceway will be moved into the regular season and replaced by Homestead-Miami Speedway. Richmond is one of just three points-paying short tracks on the Cup schedule in 2022 and NASCAR having just two short track races in the playoffs raises some folks’ eyebrows.

However, others think that the racing at Richmond over the last couple of seasons has been lackluster. So did NASCAR make the right decision by moving Richmond out of the playoffs? Clayton Caldwell and Luken Glover debate.

Richmond’s Excitement Has Been Lacking

There’s no bones about it: The last few playoff races at Richmond Raceway have been a tough watch. The races have felt long and haven’t had a lot of compelling on-track action. That’s why I believe moving Richmond out of the playoffs was the right decision. It’s been a lackluster event and the track that replaced it, Homestead-Miami Speedway, usually puts on a great show. That is something that really matters in this case.

Usually, I would think that moving a short track out of the playoffs would be a horrible and misguided decision. As much as the schedule has changed over the last couple of seasons, there is no question that the sport needs to add more short tracks on its schedule. Richmond isn’t losing a date; it’s losing a playoff race, which is a big difference.

Homestead-Miami Speedway is a gem of a facility. It’s a multi-groove racetrack that provides great racing. Even though it’s a 1.5-mile track, I believe it puts on a better show than Richmond has the past few seasons. Homestead should have never been replaced as the championship race. That is one of the worst decision NASCAR has made in the past couple of seasons. That’s why I think moving that track back into the playoffs at the expense of Richmond is not a bad move.

The goal of the playoffs should be about producing the best racing possible. Like any sport, its playoffs and championship should not only be fair and legit but exciting as well. At the end of the day, this is an entertainment business, and the goal is to entertain people. Putting a race at Homestead-Miami Speedway will be more exciting and more entertaining than a race at Richmond. Homestead has proven its prominence by being the season finale for over a decade.

Another thing that people have to keep in mind with this move, is that it is not permanent. The schedule changes all the time. With Jim France in charge, I believe the schedule will continue to change as the years move forward. If the racing at Richmond improves with the new car, then I wouldn’t be opposed to moving Richmond back in the playoffs. Heck, I may even pitch for the track to return to the playoffs.

However, as it sits right now this was the correct move. Don’t get me wrong, the racing at Richmond isn’t awful. There’s a reason it still has two Cup dates. It shouldn’t lose a date or fall off the schedule. I don’t think anyone would be happy if that were the case.

It’s still just one of three short tracks on the Cup schedule and while the racing isn’t good enough to make the playoffs right now, it’s still far better than a lot of the cookie cutter 1.5-mile tracks that we currently have on the schedule. However, at this juncture the racing at Homestead is too good to ignore. It needs to be in the playoffs, even if it means sacrificing Richmond a bit. — Clayton Caldwell

The Action Track Has More to Offer

I am thrilled to see Homestead-Miami Speedway back in the playoffs. Homestead has qualities of the perfect track in some cases. It doesn’t provide a wreckfest that totals half the field, options run large on drivers’ lines and it presents great action. No doubt, it should be in the playoffs.

That being said, I do not believe it should have been Richmond getting the boot from the playoffs. Giving it two Sunday races, with one in the middle of August, doesn’t help matters either. While it cannot be denied that Richmond has not presented eventful races over the past couple of seasons, there are ways that to fix it that NASCAR has to be open to. Kansas Speedway would have been a better option, in my opinion. Even Phoenix Raceway didn’t have exciting races until they went back to the 750-hp package.

The problem with Richmond in the playoffs was its slot. Richmond would have been better served hosting the playoff opener or being an elimination race. As the second race of the playoffs and being right smack in the middle of the Round of 16, it doesn’t come as a surprise really that it wasn’t loaded with highlight reels.

See also
Did You Notice?: Have NASCAR Playoffs Changed Perception 17 Years In?

Kevin Harvick recently voiced that the first race of the playoffs is always chaotic because drivers realize it is now playoff time. After that, they calm down for the second race. On a track that really only has two lanes, a conservative approach should have been expected. Drivers attempt to avoid mistakes they made in the first race and be more prudent at Richmond, which is exactly what we saw with these first two races.

While the racing at Richmond has been underwhelming since 2017, the fan experience makes up for it in several ways. Understandably, many cannot go to the race. But for those who do, the experience almost overshadows the race. Take this past weekend’s race for instance. The energy was felt throughout the track, fireworks were blasting, and the sport did an outstanding job honoring the events of 9/11. I’ve had the opportunity to attend six Richmond Cup races, and none of them disappointed from the fan experience side. Television also does not capture a lot of what actually happens at the track and makes it seem more uneventful than it actually is.

If this keeps up in 2022, it only adds to a growing problem that NASCAR will have to address. The sport is not immune to letting tracks sit too long, providing dull races and decreasing interest. In some cases, those tracks get wiped from the schedule or lose a date.

In Richmond’s case, something must be done. It is a historic track with many great moments. However, that legacy has to be kept up. NASCAR needs to either apply resin to the track, repave it, or adjust the banking. Instead of ignoring the problem, it must be tackled head on. The lack of cautions has been evident, and while yellows shouldn’t define if a race is good or not, Richmond’s stats show that action is not as prevalent, as shown in this tweet shared by Jayski:

The character of the races @RIR changed a lot over the years. Look at how the number of cautions has gone down over the years. The hatched areas are stage ends and competition cautions. #BuildingSpeed pic.twitter.com/axDyYvvfhD

While the move to take Richmond out of the playoffs was disappointing, the schedule it has now may be just as problematic. Race times won’t be revealed until a later date, but we do know that Richmond is scheduled to appear on Sundays in both races. The Saturday night Richmond race is a great tradition for many fans.

While new traditions need to be started to keep the sport fresh, this is not one of them. Moving it out of the playoffs and taking away the Saturday night race will likely not sit well with many local fans. If Richmond won’t host a playoff race, it should at least host the regular season finale once again. Again, Homestead-Miami coming in is a great move. Moving Richmond out and potentially ignoring a bigger problem is a cause for concern. — Luken Glover

I’m gutted to see Richmond lose its traditional date on the schedule, which has also been a playoff race. Richmond is easily my favorite track the Cup Series races at, and is often the highlight of my birthday weekend (9/11). From my earliest childhood memories, the night Richmond weekend was something I’d anticipate for weeks, and I genuinely feel that the Cup race this past weekend was one the the most interesting and entertaining races of the entire season.

I admit I may have some nostalgia when watching the September nighttime race, but I do not understand how people cannot appreciate the green flag pit stop cycles and tire wear that play out there. Cautions and crashes are not the marks of entertainment, so I don’t see what the graphic included here is supposed to convey…
(Also, I must say I’ve never even been to Richmond International Raceway, and have only watched races there on television.)

I agree moving Richmond out of the playoffs is a bad move. I’m fine with having HMS in the playoffs, but I would have removed one of the other 1.5 mile tracks out instead. Texas and Las Vegas would be too hot in August, so Kansas should have been moved.

Compelling racing? Are Kansas and Texas still in the playoffs? Wake me when they are over.

I don’t get why does everyone thing Homestead puts on a great show? Just because the championship race was held there doesn’t automatically make the races themselves more exciting. To be honest, 36 of the 40 cars that participate in those races basically moved out of the way for the other 4, so how can that be exciting?

Taking Richmond out and adding Homestead is disappointing to say the least, but not unexpected. So much for diversity in the playoffs.

Your graphic about cautions made you lose a bit of credibility. Cautions aren’t the determining factor on what makes a race good.

Last edited 9 months ago by A Different Steve
0
-1

Bill B
Reply to  A Different Steve

Actually, I feel Homestead does produce a good race, I’d even say it’s the best of the 1.5 mile tracks. Unfortunately that is only true when it is NOT the championship race. I’ve thought the regular season races at Homestead the last few years have been very good (for a 1.5 mile track). The championship race neuters whatever track it is run on because only 4 drivers are racing, the other 36 are just staying out of the way. I wished they’d have picked another 1.5 mile track (besides Homestead) for the final race instead of wasting Homestead.

“The lack of cautions has been evident, and while yellows shouldn’t define if a race is good or not, Richmond’s stats show that action is not as prevalent,”

It appears you didn’t read the entire thing. That graphic shows the character of Richmond races. No, cautions don’t define the quality of a race, which he stated, but the lack of action has been evident in quite a few Richmond races the past few years.