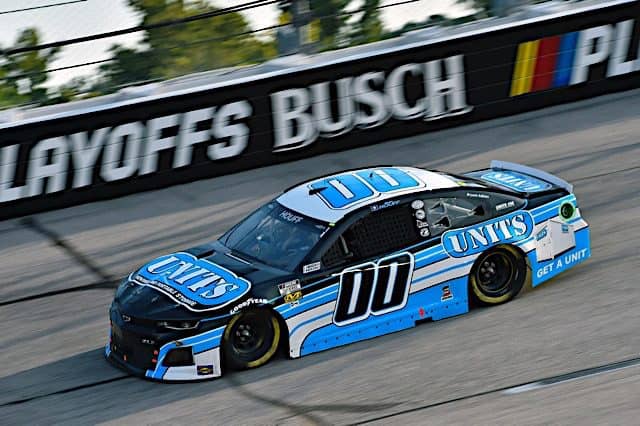 Charlie Langenstein, shop foreman and mechanical director at StarCom, said in a since-deleted Twitter post that, “We at StarCom Racing have been notified that our team will cease operations when the checkered flag falls in a few weeks at Phoenix.”

StarCom Racing hasn’t confirmed the news that they will cease operations at season’s end, but one of their mechanics — Charlie Langenstein — has done so.#NASCAR | #NASCARonNFA

Catchfence first reported StarCom was rumored to have sold its charter, giving up its guaranteed spot on the starting grid. The team has yet to confirm the news.

When asked for comment by Frontstretch Wednesday afternoon, the team replied, “as for the 2022 season, plans are still in the works and we have nothing to report at this time.”

StarCom debuted on the Cup level in 2017 and has run full-time since the start of the 2018 season. Quin Houff has piloted the No. 00 for the team the past two years and has a best finish of 13th at Talladega Superspeedway in fall 2020. He currently sits 32nd in the points standings.

The report from Catchfence also stated Spire Motorsports was interested in acquiring StarCom’s charter. FOX Sports’ Bob Pockrass reported that he expects Spire will complete a deal to get it.

expecting that Spire is working on completing a deal to obtain StarCom's charter.

When asked for comment Wednesday, Spire told Frontstretch, “We don’t have any news to share” regarding negotiations with StarCom or any additional charters acquired.

Spire recently sold two of its charters to Kaulig Racing, which is entering full-time Cup competition for the first time in 2022. Justin Haley will drive their No. 16 full time while AJ Allmendinger pilots a second car part-time in Cup. Allmendinger will continue to run in the Xfinity Series for Kaulig.

Corey LaJoie will stay with Spire in the No. 7 next year and a charter remains for that car.

StarCom is probably having trouble lining up another driver who can bring sponsorship for ’22. With StarCom, Rick Ware and Spire all fishing from the same small pond of paid drivers, not to mention a dozen Xfinity rides that could cost potential paid drivers’ sponsors a fraction of what it takes to run Cup, it is not a surprise they might not answer the bell for ’22.

It has to be another situation of not enough money coming in, probably because of lack of TV coverage. ROI?

No surprise. The capital needed to buy a new fleet of cars is substantial. Other new equipment will be necessary, too. I’m surprised we aren’t losing FRM entirely, aren’t losing JTG entirely, that RPM isn’t having to merge, and that RWR will probably three cars. Won’t be surprised if Quin races for Spire. He’s improved a lot and is a client of Spire, if memory serves. Quin in Year 3 with Spire would be more indicative of what he can do now.

That said, I want Landon Cassill on the Cup grid week in and week out.

The wheel continues to turn. The more well funded , well connected teams continue to be able to form alliances which will serve them well whenn the inevitable changing of ownerships takes places.
Those who cant amass the money, may as well go home before they havelost everything.
Years ago it was said that the ultimate plan was for 10 teams each with 4 cars. While I think this has probably been modified to some degree, I believe it still seems to belgely the plan.