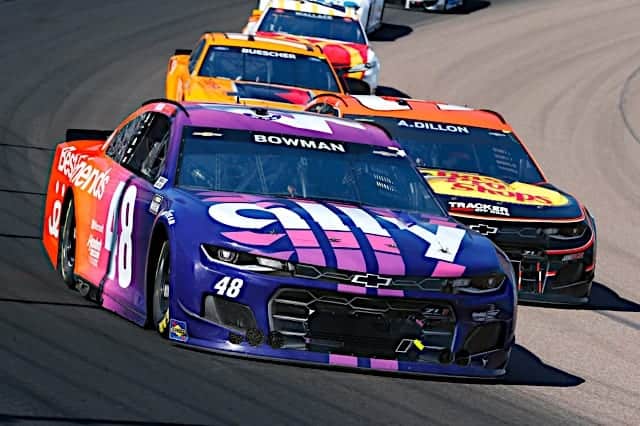 Did You Notice?… The 2021 NASCAR Cup Series playoffs have flipped the script on two of its biggest teams?

Stewart-Haas Racing has struggled through the worst year of its existence. SHR has just one win, a darkness-shortened New Hampshire Motor Speedway upset by Aric Almirola. Marquee driver Kevin Harvick sits winless a year after setting a NASCAR record with nine victories at age 44. Rookie Chase Briscoe sits without a top-five finish while last season’s Rookie of the Year, Cole Custer, hasn’t run better than seventh since his upset victory at Kentucky Speedway in July 2020.

See also
Fire on Fridays: Will the Spotlight Ever Shine Again on Kevin Harvick?

Things have been so bad for Custer, in particular, he’s ahead of just four full-time drivers in the standings: Corey LaJoie, Anthony Alfredo, Josh Bilicki and Quin Houff. Not exactly a Who’s Who of who’s reaching victory lane every week.

Hendrick Motorsports, meanwhile, romped through the regular season with 11 wins in 26 races, more than any other team. Kyle Larson won the regular season title with five victories while Alex Bowman surprised with three, earning him a two-year contract extension. Reigning NASCAR champion Chase Elliott added two wins, both on road courses, while William Byron earned a victory at Homestead-Miami Speedway. That kickstarted 11 straight top-10 finishes for the No. 24 driver, a new NASCAR record for drivers age 23 or less.

It’s the best year for HMS since 2014, when Jeff Gordon and Jimmie Johnson were leading the championship charge and the team racked up 13 wins altogether. Without the playoffs, Gordon would have cruised to the regular season title the same way Harvick trounced the field on paper in 2020.

But neither wound up a champion under the current format. Just like in stick-and-ball sports, NASCAR’s playoffs allow weaker teams a chance to come in and steal the championship.

There’s a lot of uncertainty heading to Bristol Motor Speedway Saturday night (Sept. 18), a short track that’s known for unexpected crashes. Anything can happen, and it’s possible HMS will find a way to change their luck.

But if Bowman and Byron do miss out, while SHR moves on, it’s simply a product of the playoff system. The young duo had bad luck at the worst possible time, crashing out at Darlington Raceway in the opener to eliminate any margin for error. Their race at Richmond Raceway wasn’t terrible in the grand scheme of things, even though it wasn’t up to HMS standards: 13th for Bowman, 19th for Byron.

SHR, meanwhile, spent 2021 in purgatory before showing some signs of life starting in July. Even then, it’s only Harvick who has picked up the pace consistently; he’s got four top-10 finishes the past seven races, leading 90 of his 129 laps. Almirola doesn’t have a single run of 11th or better since July’s NHMS victory; everyone else at SHR has at least one.

Both Harvick and Almirola, should they advance, did so by surviving: keeping their nose clean when others had trouble. I think that’s the biggest difference with this NASCAR format, at least in the early rounds, that fans still struggle to accept. In stick-and-ball sports, if you have a lower-seeded team reach the championship, they have to beat the best regular season teams one-on-one.

The Tampa Bay Buccaneers, for example, were the 5th seed in the NFC but won the Super Bowl by winning all their games on the road. The Green Bay Packers were the best regular season team, but they were beaten by the Bucs heads up.

Did Almirola and Harvick really beat anyone? Or did they just catch lucky breaks from a system that puts nearly half the sport’s full-time teams in the championship chase?

Harvick and Almirola could potentially benefit from the gluttony of that system. If the NASCAR Cup postseason cutoff was 12, neither one would have made the field (along with Denny Hamlin and Tyler Reddick). Instead? They have a shot to pull a rabbit out of the hat.

And for HMS, Bowman’s and Byron’s years, which in a non-playoff world would be considered highly successful, get flushed down the drain if they don’t succeed at Bristol. Those drivers would be eighth and 12th in points without the playoffs; in Byron’s case, he’d be 28 points from a top-five spot.

Will people still see it that way or are their years a failure because of a first-round playoff exit? That perception, by the fans and stakeholders in the sport, is the truest sign of how much the postseason mentality has taken hold in this sport.

Did You Notice? … The 2022 NASCAR Cup schedule is on the verge of being released? The Athletic provided a potential leak of the schedule Tuesday but no official word has come from series officials.

A look at the potential schedule can be found here. Here are some quick takeaways if this does, indeed, pan out to be what we see released tomorrow.

It is silly to call something a ‘playoff’ when every team is still competing on the track. The ‘I just got lucky’ factor makes the whole concept pathetic.

We all know the shortcomings and crapshoot nature of the playoffs. Nice to see someone in the media point them out instead of just toeing the company line and “ra-ra-ra-ing” them while ignoring the obvious. Thanks for that.

I wonder how long NA$CAR will let him keep his job? MAybe NA$CAR will buy Frontstretch too.

I guess some people haven’t heard of RacingOne.

What do any of the teams have to gain by going 3000 miles and running an exhibition race on a track they will not race on again? It seems pointless to me and if I was an owner I would say no thank you.

The distance might be funky but it will be exciting to see a quarter-mile racetrack for the Clash.

Willing to bet there are 1/4 mile tracks a LOT closer to home than this one. Yet another gimmick move.

Bowman Gray is an hour from Mooresville. And I bet each Saturday night the modifieds run there, there are more people attending than have been at Fontana recently. But Ben Kennedy gave all these great reasons why they should be in LA. Not that I believed any of them.

As someone who enjoyed watching races at Pocono and Dover, not because they are the closest tracks to my home–I watch on television rather than attend–but because they are very different than other tracks so present the opportunity for something different. I put the blame for lackluster racing on NASCAR and its failure to find the right packages for those tracks because than on the tracks themselves. NASCAR has focused solely on fixing the racing at intermediate tracks and superspeedways, which never were blamed for their issues, while giving up on the unique flat two and a half milers (Indy and Pocono) and two high-banked concrete tracks (Dover and Bristol), each of which as lost a race. I would hope that if the racing at those tracks is good with the new car, they consider restoring the races removed while cutting back on the infield roads courses and the silliness on dirt. I’m happy with adding Nashville and now Gateway (and, add Iowa, while you are at it) but not at the expense of tracks that are different from the cookie cutters.

A Different Steve
Reply to  Marc

People have been saying this for years. But the talking heads keep blaming the tracks for terrible racing. NHMS used to have great racing until the changed the car. Same for Pocono, Phoenix, and several other tracks. Can Nascar not see the pattern? Evidently not or they are simply ignoring it.

My guess is the changing of the playoff schedule to heavily cookie cutter/mile and a half tracks is because they think the package with the new car will provide great racing on these tracks. I will believe that when I see it, though.