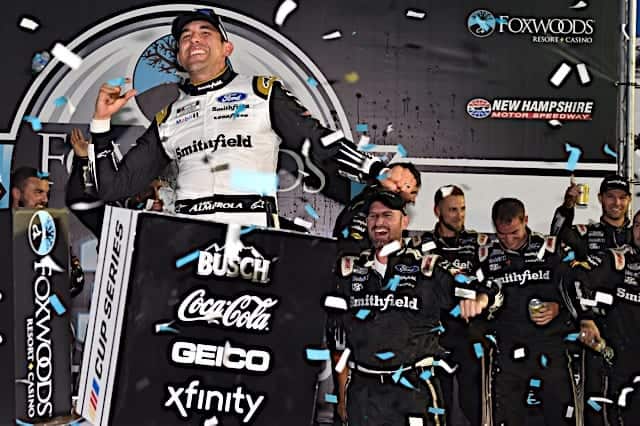 Saturday night’s (Sept. 18) race at Bristol Motor Speedway marks the final race in the first round of the 2021 NASCAR Cup Series playoffs, and four drivers will be ending their title bids when the checkers fall. Barring a true Hail Mary win, one of those drivers will be Michael McDowell, perhaps the underdog story of the year.

McDowell made the playoffs after winning the Daytona 500, the only Cup victory of his career. By the small-team standard by which his Front Row Motorsports team should be judged, McDowell had a very good season. A storybook ending just isn’t in the cards.

McDowell wasn’t the only playoff underdog this year. In fact, he arguably wasn’t even the biggest one. While based on his team’s budget, McDowell is certainly at the top of that list, based on results, there’s another driver whose playoff berth looked unlikely at best. In fact, at the end of the regular season, before points were reset for the playoffs, McDowell wasn’t the lowest playoff driver on the list. That was Aric Almirola.

Almirola was just 23rd in points after the Daytona International Speedway regular-season finale (McDowell was 21st) and his numbers have been decidedly lackluster. His win at New Hampshire Motor Speedway marks his only victory of 2021 and he’s tied with McDowell in top-five finishes (two) and has two fewer top 10s with just three. He’s probably on most people’s list of the four drivers likely to be eliminated this week.

Except right now, heading into Bristol, he’s hanging on. Almirola is currently 11th in points, above the cutoff. He’s only got three points on Kurt Busch and Alex Bowman, but he’s done one thing in the payoffs that the drivers behind him have not: avoided trouble.

And that leaves Almirola with a path, albeit a dusty and overgrown one, to the unlikeliest of things: a NASCAR title.

Here’s the thing: if Almirola makes it past Bristol (and that’s no sure thing as his numbers there are not impressive), you can’t write him off in the Round of 12 because of one thing: Talladega is the second race of that round and it’s Almirola’s best track. He’s got wins there in Cup and Xfinity.

A Talladega win would put the No. 10 team through to the Round of 8 regardless of performance at Las Vegas Motor Speedway or the Charlotte Motor Speedway ROVAL. Almirola’s pretty solid at Martinsville Speedway, just without a lot of luck. He hasn’t been great at Texas Motor Speedway or Kansas Speedway, but he doesn’t have to be if someone else has trouble; he just has to get by.

The thing is, as unlikely as it is, Almirola races for a team that can put added resources behind him in the playoffs, and as long as he stays in it, the greatest Cinderella story NASCAR has ever seen is still a possibility, however small.

And what a feel-good story that would be: a driver who’s only seen modest success in the Cup Series defies the odds at every step to race for a championship. Making the championship field at Phoenix Raceway would be a remarkable accomplishment given the strength of this year’s field. It would be the kind of story nobody would believe if it wasn’t true, one for the ages.

And it would be the worst possible outcome for NASCAR.

We all love a good underdog story. First-time winners, small teams defying the odds, rookies finding their groove. And when they win races, it’s great for the sport and the fans. McDowell’s Daytona 500 win is a great story: an underdog win by a humble, genuine guy.

Almirola’s win at Loudon is a great story, too. A struggling driver pulling out a legit win at the eleventh hour? Fantastic stuff that resonates with fans.

But a feel-good race win doesn’t make a championship season. Humble and genuine though he may be, McDowell, as a package with his entire team, isn’t championship caliber this year. Neither is Almirola, and that takes nothing away from his impressive win in New Hampshire.

But they were below 20th in points before the reset for a reason.

Now, if Almirola were to go on a tear over the next eight weeks and post top fives every week and post multiple wins, the question of whether he’s champion material might change a bit. But if he squeaked through and won the title even with a win at Phoenix doesn’t really make a true championship season. It would be hard to say he deserved the title, and that’s not a great look for a sport trying to fit in among stick-and-ball games that it already can’t be compared to. Talk is cheap. NASCAR’s top title shouldn’t be.

NASCAR has a very small shot at the best storybook ending in years. Too bad it would decimate the sport’s credibility in the process.

If it does happen and if it does “decimate the sport’s credibility”, then the whole “playoffs” process become a joke.

I can only speak for myself, but for me the credibility of the Championship went away after Matt Kenseth won the last real Season Championship. Since then they have tried various contrived, & convoluted ways to manufacture “drama.” Instead of letting it play out over the course of the season. Now they start talking about the Championship, & points after the Daytona 500. I would love to see one of the underdog teams win it all, but of course they won’t.

The whole playoff process is already a joke. You can win 20 races and one mishap on pit road in the final race costs you a championship. That is a joke.

A driver could win 35 events and not win the already farcical title.

A driver could lead every lap of the season except the last one and not win, and lose by 0.001 seconds!

You do know that a person can win the first 35 races, and finish 2nd at Phoenix to a final four participant, and would lose the championship. What other auto racing championship, would have this result?