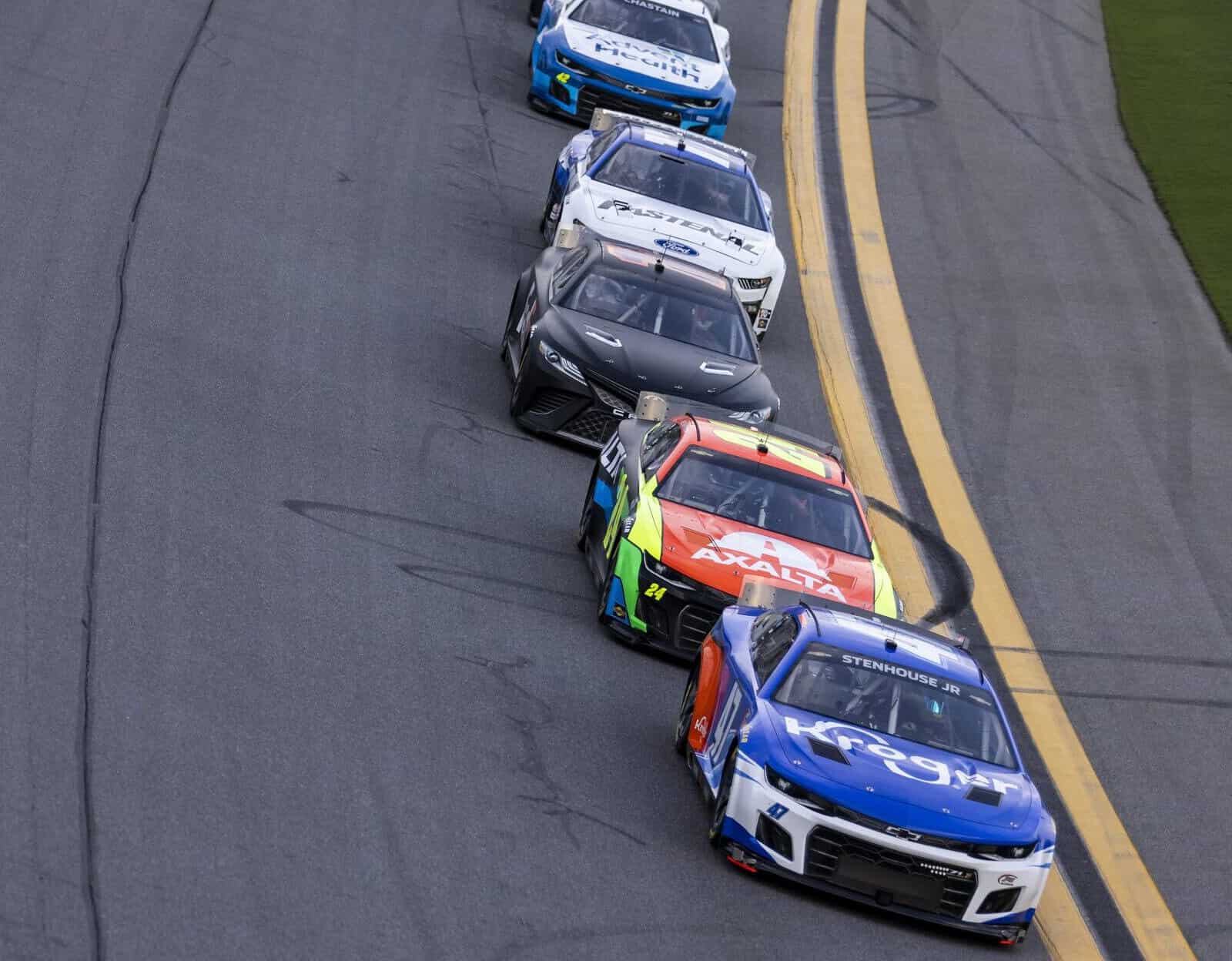 Five months before its official debut, the club of NASCAR Cup Series drivers who have gotten a crack at the Next Gen car grew last week.

For two days at Daytona International Speedway, eight drivers took part in what was primarily a Goodyear Tire test at the 2.5-mile superspeedway.

The group was a combination of drivers getting a repeat shot at NASCAR’s innovative car — Austin Dillon, William Byron, Ross Chastain, Cole Custer, Chris Buescher, Joey Logano — and drivers getting in it for the first time — Denny Hamlin and Ricky Stenhouse Jr.

It was the largest number of Next Gen cars in action at the same time so far in its development. The previous high was two cars, driven by Kurt Busch and Martin Truex Jr. at Charlotte Motor Speedway last winter.

Byron was one of the first drivers to test the car, all the way back in early 2020 at Auto Club Speedway.

Compared to the car he drove on the two-mile California track, Byron said his car last week was “very different in terms of the details.”

“The interior design of the car was a lot more similar to the current car than I thought it would be,” Byron said. “We spent a lot of time at the shop trying to get that right and make sure my seat position was good. I sit slightly lower than I do in my current car, which I don’t like. So, we’re going to work on that. The steering is still a work in progress. I don’t know if it’s really the steering or if it’s the tire and the stiffness of the sidewall and also the stiffness of the suspension parts and things.

“So, that’s an interesting work in progress because I feel like that’s going to throw some guys off because you’re not moving the wheel as much and the car is very responsive to everything.  […] Very normal in the shifter. I feel really good about that. The drafting aspect of the car was okay. I think the speeds were a little bit lower than the current car, but some of the similar characteristics in pushing and things like that were still there.”

Of the eight drivers in last week’s test, Hamlin’s appraisal of the car came with raised expectations.

Over the summer, he was vocal over concerns about safety with the car after a crash test at Talladega Superspeedway, citing a lack of communication from NASCAR about results.

See also
Dropping the Hammer: The Next Gen Car vs. the Internet

“I would say I’m a little bit more educated on it,” Hamlin said. “In general, there was a little bit more time when they can sit with you one-on-one and discuss things. I still have questions, but I’ll have to see all the information to really understand the questions that I want to have. But certainly, we’re gonna end up racing it, we’re gonna race it. So we’re all gonna have to get comfortable.”

But Hamlin and others were uncomfortable with one specific aspect of the car: the heat.

Last month at Indianapolis Motor Speedway, Chastain told me he had expressed concerns to NASCAR after a test at Dover International Speedway about the car’s cockpit getting too hot for drivers.

Hamlin doubled down on that.

“I can’t express how hot it was,” Hamlin said. “It’s a big, big concern, obviously. It’s difficult because it’s the way the car is designed. The design of it, having it where the exhaust is all boxed in running right underneath the seat, it’s hot. It’s 450 degrees down in that box, so it’s super hot, and then you got the exhaust (from) the hot radiator flowing right in into the car from the hood. I think you’re gonna have to really make some big changes to it, something that will allow us to finish races without having major issues.”

One area of the car that became more widely known about after the Daytona test is the car’s rear-view camera.

As of now, the Next Gen car is equipped with a rear-view camera that serves as the rear-view mirror. The “mirror” screen in the cockpit can revert to an analog mirror if the camera fails or is turned off.

“The rear-view camera is something that is really neat there, learned a lot about it in the runs and the drafting runs there,” Buescher said. “You can actually see quite a bit more than you’re used to. I used the camera a lot, and the spotter up on the roof to learn where cars are and be able to start getting a gauge of how close they really are. Objects in mirror are closer than they appear, it still applies to the camera, too.”

Byron said the camera is a “big difference” that “I think we all underestimated the ability of.” But he added that he “liked it.”

“The way my seat position was and everything, I couldn’t really see very well out of the real mirror on the top,” Byron said. “I think that’s just something that we can definitely get ironed out and fixed. So, I kind of used the rear-view camera instead, the whole time, and felt like it was really good and accurate. You could see the spoiler, and it seemed like the refresh rate on the camera was pretty accurate. I think that’s going to be a tool. I’m not sure how many guys will use it right away.”

It might be a generational thing, but don’t count Hamlin among drivers planning to use it.

“I didn’t run it, it was our personal choice not to run it,” Hamlin said. “For me personally, I have been in vehicles that have had a rear-view camera while you’re driving. I didn’t like it. To me, it just kind of crosses my eyes, makes me a little dizzy when I look at it. But the reason that we have those is because the visibility isn’t as good. These cars are a little bit higher off of the ground. So we need to be able to see. So they put in a camera back there. I think that they can fix some things with the spoiler, bring the carbon fiber part of the spoiler down […] That will certainly help with the vision. I think that the camera’s probably something that I really won’t explore.”

The number of Next Gen cars on-track at once will only grow. An organizational tests is expected this fall at Charlotte. John Probst, NASCAR’s Senior Vice President of Racing Innovation indicated there will be another Daytona test in the run up to the Daytona 500 in February.

“We obviously have a list of things to work on coming out of here,” Probst said. “We have to work on the heat in the car; we have some ideas there. We used the afternoon today to try some big swings at things and found some directions to go, so I feel like we made some really big gains there.

“We’ll probably come back here in January and do another test with (possibly 26 or more) teams, it’s an important track for us to get right.”

I still haven’t seen any comments on whether the drivers can set up the car the way they want or if it’s still, “Here’s the car. Make it work.”

It’s made up of single sources for components. I imagine they will be able to set it up but the entire purpose of the car is to put the onus on the driver. It’s going to make for exciting racing.

Not if the driver can’t get the setup he wants and the cars are IROC 2.0.

Well, naturally, none of the drivers are going o be too critical of this car. nor will any of them express their true feelings about it. NASCAR will take PUNITIVE action against any driver that speaks badly about their Bastardized, likeness of a V8 Supercar. road-racing sport car! The last link to stock car racing has been severed! I am DONE with NASCAR, after being a fan and following it for over 60 years! NASCAR cares NOTHING about it’s long time, hardcore, grassroots fans, so we are GONE!

Richard, I agree totally. This car has been hyped up by design, and really, they’re product on track isn’t going to be that much different than what they’ve been doing. I remind “roots” fans/ racers that na$car is only one sanction. Here’s five ( there are more) reasons I don’t pay that much attention to napcar anymore- Pensacola, Huntsville, Opp, Al. , Berlin, Anderson… I can go on. Support local short tracks, they are really putting in great shows!

You got it. Bowman Gray and South Boston for me. Great shows each Saturday night I attend.

It’s September, I believe heat was a problem back in early 2020 and that’s still not been addressed. I’ve been saying IROC for a year now and have seen nothing to change my mind. So they have one more test in January then Nascar says let’s race it. I’m betting on a fiasco. Nothing exciting about this at all.

Nothing but the fiasco, hell that my be fun.