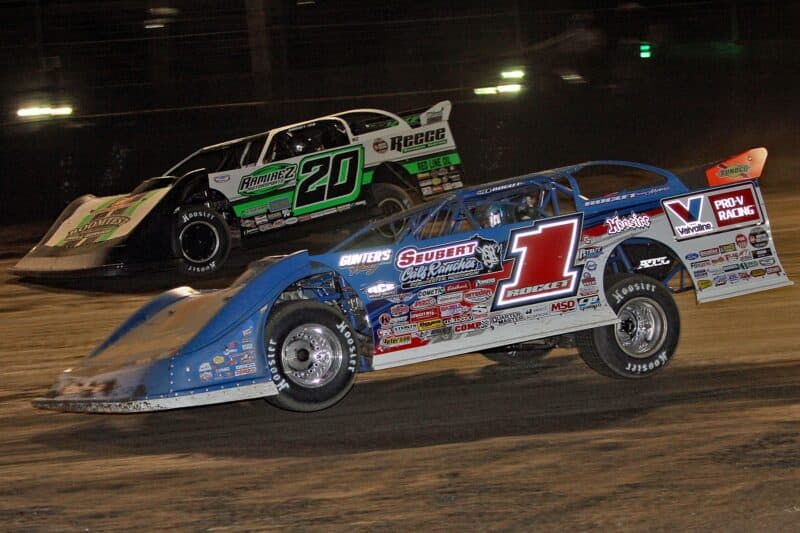 Brandon Sheppard scores “One for the Road” for the Outlaws at Fairbury, while late-race fireworks prove costly for non-wing race leaders from South Dakota to North Carolina.

Chris Windom made the move of the race Sunday night with a daring high-side pass in turn 4 to take the race lead with five laps to go. Problem is, the caution flag flew before he completed the lap, keeping CJ Leary up front. Bailed out by the caution flag, Leary nailed the ensuing restart and drove off to the $20,000 win in the inaugural USAC Nationals at Huset’s.

That's how @CJ_Leary_'s Sunday night finished up following his victory in the USAC @AMSOILINC National Sprint Car portion of the @HusetsSpeedway @usacnationals.

He & the top performers spoke afterward.

Windom didn’t have to wait long to redeem himself, winning the $20,000 USAC midget feature that closed out Sunday’s program.

Current World of Outlaws late model points leader Brandon Sheppard used the legendary FALS cushion to pass Garrett Alberson on a lap 20 restart, never looking back to score a $15,000 victory Monday night in race that was moved up 24 hours due to a poor weather forecast.

The win was a bright spot for the Outlaws in a deep field that included Larson and the weekend’s World 100 winner, Jonathan Davenport. Larson led laps in the early going, but was forced to the back with a flat tire under the lap 20 caution that prevented a Shepperd/Larson duel from materializing in the race’s second half.

Enoree, S.C.’s Zack Mitchell walloped the field into submission Tuesday night at Laurens County, leading all 40 laps of a caution-free feature without a challenge mounted for the entirety of the race.

The race, run in support of local Shriners’ chapters, was headlined off the track by an appearance by NASCAR Cup Series veteran David Ragan, who carried Shriners colors on his racecars throughout his career.

Spotlight: Weekly Racing Program (600 wingless micro sprints)
Where: Millbridge Speedway – Salisbury, N.C. (streamed on DirtVision)
Why We Chose It: The only available late model races on the evenings were qualifiers.

Denver, N.C.’s Brent Crews prevailed in a barnburner of a micro sprint feature to cap the Wednesday night program at Millbridge, throwing slide jobs at just the right time to prevail in a battle that saw four cars under a blanket for the race lead in the final five-lap shootout, including NASCAR Cup Series regular Christopher Bell.

Crews, who spent laps 21-25 in a furious slide-job battle with Will Boprey for second, caught a break when race leader Gavan Boschele, who led the opening 25 laps, broke a right-front wheel in an incident that saw another car flip in turn 4 five laps short of the checkered flag.

Matt Sheppard’s 2021 campaign that has him poised to defend his WoO late model title has been far more a model of consistency than dominance, but Monday’s win came in dominant fashion against a field of cars arguably stronger than the majority of the WoO races in 2021.

Sheppard gets another shoutout for being part of a side-by-side battle with Shannon Babb that made Monday’s third heat race arguably the highlight of the evening at Fairbury.

Chris Windom’s win in the 100-lap USAC national midget race at Huset’s Sunday night was not only a huge payday, but it allowed him to keep current points leader Buddy Kofoid (who finished second) within striking distance in the standings. Windom’s campaign to defend his midget title from a year ago remains very viable after this weekend. Having said that…

Windom got absolutely hosed by the lap 36 yellow flag that nullified what would have been a race-winning pass in Sunday’s sprint car feature.

Sheldon Creed’s NASCAR career took a major step forward this week, but troubles with his micro sprint at Millbridge on Wednesday night prevented Creed from even starting the B-main.

Robert Ballou was running second in the opening laps of Sunday’s sprint car feature at Huset’s when he “biked” his car hard in turn 2 on the second lap and popped a tire. Instead of battling for the win, Ballou instead had to climb back to 11th by race’s end.

It’s hard to call a fourth-place finish vexed, but had Christopher Bell not had a moment on turn 4 exit nine laps into Wednesday’s micro feature at Millbridge, he’d have likely been the race winner. Instead, Bell spent the entire rest of the feature battling for position at the back of the top five.

Kevin Weaver’s violent ride on the FALS frontstretch Monday was a stern reminder that there’s no good way to flip a late model.

Brutal ride for Kevin Weaver, great to see him get out of the car in @PitStopUSA heat #2! pic.twitter.com/9drhxHJZFr

The WoO late models announced a late-season schedule cancelation, with the series race at Revolution Raceway Park in Monroe, La. rescheduled for 2022. I can think of several reasons why a major-dollar race in Louisiana would need to be canceled or postponed given the beating Mother Nature has put on the state the last month, which makes me wonder why the tire shortage was listed as the reason of the cancelation. Especially considering that it seems the Rev has canceled more races than it’s hosted in 2021.

The 2022 Lucas Oil Late Model Dirt Series schedule is starting to trickle in, with multiple race dates scheduled for All-Tech Raceway as part of Speedweeks and a first-time trip to the renovated West Virginia Motor Speedway already confirmed. Well, add a major coup for the series to the list, as the annual Firecracker 100 at Lernerville will be leaving the WoO sanction for the LOLMDS, all the while bumping its winning purse from $30,000 to $50,000. Not sure there’a any way to couch this than a clear win for the LOLMDS and a loss for the WoO late model tour.

Lord knows the USAC program at Huset’s lasted long enough for having only two programs, and Lord knows I’ve ranted about plenty of tracks scheduling too many support classes for a touring series event. Having said that, judging from the grandstands, it sure seems like Huset’s needed a dash of local flavor. The crowd certainly didn’t look commiserate for an event with two $20,000-to-win features on the ticket.

I’ve honestly gotten away from following micro racing because it’s not winter and there are plenty of races with full-size racecars to choose from, but damn if the final 10 laps of the micro feature at Millbridge weren’t fun. Shoutout to Crews and BoPrey both for putting on a slider clinic.

SMI’s network of dirt tracks on its NASCAR campuses continues to add to its portfolio of races, with the Dirt Track at Charlotte announcing that the Colossal 100 will return in the summer of 2022 after more than a decade in hiatus.

Mark those calendars – the Colossal 100 is coming back to The Dirt Track in 2022.

The irony that dirt racing on NASCAR campuses is proliferating even as the NASCAR Cup Series is building tracks in football stadiums rather than returning races to the bullrings its spent all year trying to argue it’s “reconnecting” to.

67 – percent increase in the winner’s purse for next year’s Firecracker 100 at Lernerville.

Where it Rated (on a scale of one to six cans with one a stinker and a six-pack an instant classic): We’ll give the midweek a solid four Head of the Horseman from D9. A barnburner at Millbridge and a strong late model field at Fairbury were good for weeknight breaks.

Up Next: The schedules around the country have proven in constant flux this week, but there’s two $50,000-plus events on the calendar for this Saturday, with the super late models headlining the Texas Dirt Nationals at the Texas Dirt Track and the Short Track Super Series modifieds contesting the Fonda 200 for $53,000-to-win. Coverage will be available on RaceXR+ and Flo Racing respectively.