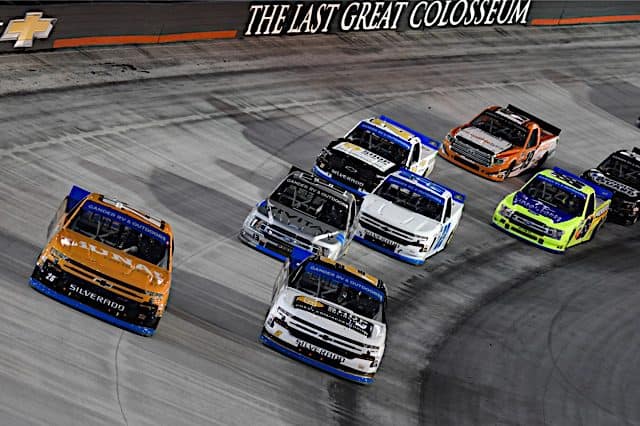 Sheldon Creed and John Hunter Nemechek are safe with one race left in the first round of the NASCAR Camping World Truck Series playoffs as the series takes to the (paved) Bristol Motor Speedway on Thursday (Sept. 16) night.

Anyone who’s been paying attention to the tour at all this year would probably figure that, though. The pair has combined to lead nearly 1,000 laps after 17 races this season while racking up eight victories between them. Creed started 2021 quieter than he was last season, at least until the playoffs began, but he swept the opening two races of the first round while Nemechek has been a frontrunner all year.

This begs the question, though: to paraphrase a Pearl Jam lyric, who all remains and who will be left for round two?

With two advanced, eight drivers remain to vie for six spots. Currently, the playoffs haven’t been very kind to the Smiths (inadvertent music reference this time): both Chandler and Zane ended up with sub-25th place finishes at World Wide Technology Raceway at Gateway but they ran well at Darlington Raceway and scored top-10 results.

Yet, both still sit below the cutline: Zane -5 and Chandler -12.

Take a look at the #NASCARPlayoffs leaderboard for the #CampingWorldTrucks after two races in the Round of 10.

If we stretch the definition a little bit, it’s the old guard that leads the way of the six above the cutoff. Matt Crafton, of course, is at the forefront, sitting third in points, while Stewart Friesen rides just two points behind him. Crafton is 45 years old and Friesen 38, and while Ben Rhodes, right behind them in fourth, is just 24, he feels like an aged veteran of the series.

I said it was a stretch, but Rhodes appeared a few times in 2014 and has been full-time since 2016. This year marks his sixth full-time season in the series and 137th start, more than most of the field will have under their belts on Thursday night.

The younger (or at least more recent) faces of the series follow them: Todd Gilliland, Carson Hocevar and Austin Hill are within just seven points of the cutoff.

Neither Hocevar nor Chandler Smith have ever won a race. Half of the playoff field (those two, along with Crafton, Friesen and Zane Smith) haven’t won all year.

As a whole, it’s been a streaky kind of season. Rhodes won the first two races, Creed’s won the most recent two and Hill won the two before that. In the middle, Nemechek reeled off two in a row as well.

Bristol’s penchant for chaos will almost certainly throw a wrench into things, though. Take last year, for example, and Sam Mayer‘s victory. Mayer became the youngest winner in series history with it, but this sets up the chance that a part-time or one-off driver could throw a driver needing a win for a loop. This year, for example, Mayer will be in the field again, along with the talents of Josh Berry, Doug Coby, Parker Kligerman and Grant Enfinger.

Enfinger has been a near championship-caliber driver all season despite splitting time between equipment on totally different ends of the spectrum, running all but one race and racking up nine top-10 finishes and leading 125 laps.

The truckers did take to the Last Great Colosseum’s high banks earlier this year, though it was on a dirt surface, during the day and won by a Cup Series driver in Martin Truex Jr.

As for last year, the highest-finishing 2021 playoff driver was *gasp!* Chandler Smith in fifth! So that bodes well for a guy who might end up absolutely needing that win if his fellow title contenders run well.

Crafton was the next current playoff driver, finishing 10th. In terms of drivers not named Mayer who did well in 2020, Tanner Gray ended up third: still looking for his first win and a potential spoiler for a playoff driver needing that spot in victory lane.

Friesen will be looking to atone for a rough outing last fall at the Virginia/Tennessee state line, where he finished 32nd and 33 laps down.

Hocevar finished 17th in that race, but he’s made an absolute splash in 2021. Driving for a Niece Motorsports team that really seemed to falter after Ross Chastain‘s 2019 championship bid and subsequent departure, he burst onto the scene in the regular season with three top fives and five top-10 finishes, adding another to the latter category at Gateway. He hasn’t finished worse that 24th all year and hasn’t had a result below 16th since Kansas Speedway in May, 10 races and four and a half months ago. If he doesn’t get a win before 2021 is up, it seems a surefire pick to have him in victory lane at least once next season.

Of significance as well: Nemechek has competed in six Truck Series races on asphalt at Bristol and has finished eighth or better in five of them.

And, for what it’s worth, let’s look at the dirt race from this year.

Rhodes ended up second, Gilliland fourth, Zane Smith seventh and Hill ninth. Not bad for a quartet going up against some Cup drivers and dirt ringers.

As for last year’s Bristol event, it was relatively calm: five cautions, two of them for stages. The others were for relatively minor crashes, so the track might be due for a chaotic race.