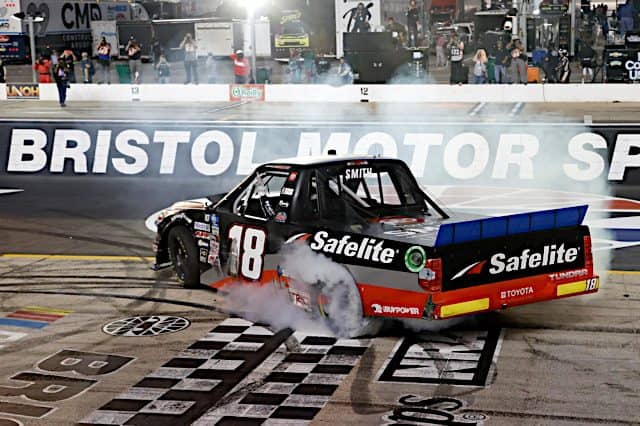 In a seemingly must-win situation, Chandler Smith had the restart of his NASCAR Camping World Truck Series career Thursday night (Sept. 16). On the final restart with six laps remaining, he drove aggressively to pass Sheldon Creed, who won both stages and dominated the race, to win the UNOH 200 at Bristol Motor Speedway. It’s Smith’s first career Truck Series victory and it sends him to the Round of 8.

“Man, God is good,” an emotional Smith told FS1 after celebrating his first-ever Truck Series win. “I’ve really been tested here in the last year or two, tested my faith, and I’ve kept it, man. This is unbelievable. I can’t thank everyone behind me. This is amazing.”

“I feel like Truck racing is the hardest of the three series right now,” Smith continued. “In 2019, I felt like I was really good. Nothing’s changed about me; the competition’s gotten harder. I had to go to work and do a lot more, more studying, and it’s finally paid off.”

Grant Enfinger finished second. John Hunter Nemechek finished third after passing both Smith and Creed on the final restart, before nearly hitting the wall, giving the lead back to Smith.

Stewart Friesen finished fourth and advanced to the Round of 8.

“We had a really good truck tonight and just didn’t have really good long-run speed,” Friesen said. “There was probably some stuff I was doing that I need to clean up. Got a good restart there at the end and just about had a catastrophe. I tried to get too much getting around the No. 42 on the restart when he stayed out.”

Niece Motorsports opted to have Carson Hocevar stay out on track instead of pitting at the end of stage two. As a result, Hocevar gained valuable track position, finished sixth and advanced to the next round.

As the Round of 10 elimination race, this race at the 0.533-mile short track featured eight playoff drivers battling for six remaining spots.

At the end of stage one, seven playoff drivers accrued stage points.

When stage two ended at lap 110, again seven playoff drivers, including Smith, earned stage points, tightening the battle as the field prepared to race to the checkered flag.

However, Austin Hill and Zane Smith both received pit road penalties, so they both had to fight from the back of the pack to the front to ensure they advanced to the next round.

For Smith, it became a challenge when he made contact with lapped driver Jennifer Jo Cobb.

Take a look at how this Final Stage caution happened from behind the wheel.

Smith persisted, ultimately finishing eighth. He advanced to the Round of 8 by two points.

“Unfortunately, this has kind of become the new norm of going to the back,” Smith said. “I heard it was a BS call… I want to apologize to my teammate for always having to go back there. If I was up there, I would’ve loved to help him out with either wrecking or moving the Nos. 18 or 4 cause god, I can’t stand when teammates do that kind of stuff. I can’t wait ’til we finally have one of these without a penalty. It should be a lot easier.”

Hill unfortunately was the only playoff driver who did not finish. As a result, his 24th place ended his championship hopes.

Todd Gilliland also failed to advance to the Round of 8 after crossing in 10th, dashing his chance for the championship.

“I was pretty aware [of the points], then that last restart became chaotic,” Gilliland dejectedly told FS1 post-race. “I pretty much knew I needed to beat the No. 99 to be in an OK spot. Honestly, [I] don’t know what happened. They just both slipped by me, the Nos. 21 and 99, so I’m just heartbroken, at a loss for words. I don’t know what to say. We’ve had a good year so to miss it by two points really stings.”

Of the other playoff drivers, the remaining two ThorSport drivers Matt Crafton and Ben Rhodes finished seventh and ninth, respectively. Despite leading 189 of the 200 laps, Creed finished two laps down due to his incident with Chandler Smith, winding up 19th.

The Round of 8 begins at Las Vegas Motor Speedway next weekend. The Victoria’s Voice Foundation 200 will take place on Friday, Sept. 24 at 9 p.m. ET with TV coverage provided by FS1.

More of the same. The illegal jap crap from the anti American gibbs racing wins again. japCAR and gibbs will fail.

I don’t know how you can call throwing a gas can over the pit wall on the ground a BS penalty. Seem pretty dangerous.