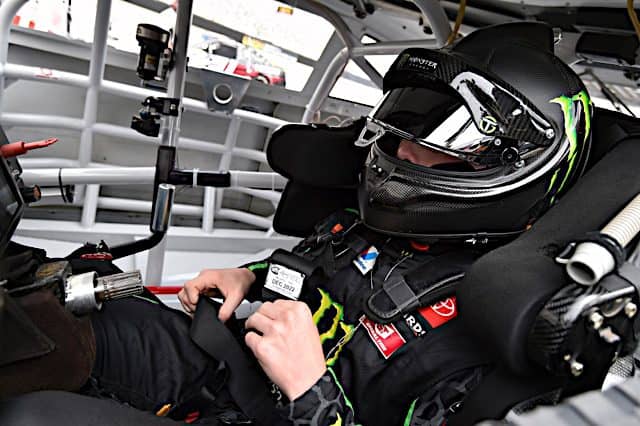 For the 10th time this ARCA Menards Series season, Ty Gibbs drove the No. 18 Toyota to victory lane. He dominated the Bush’s Beans 200 at Bristol Motor Speedway, winning the race after nabbing the pole earlier Thursday (Sept. 16).

Gibbs controlled the race, leading the majority of the laps, despite nine cautions in the 200-lap race.

It’s the 18th win of his ARCA career. Gibbs became the first driver since Frank Kimmel in 2002 to win 10 races in a single season.

Because this race was the final combination race for ARCA and the ARCA Menards Series East, it’s Gibbs’ fourth East win this year and the sixth of his career.

“First of all, this is just awesome,” Gibbs told FS1 after climbing victoriously out of his No. 18. “To have all my guys here, my teammate and close friend [Sammy Smith] to wrap up a championship. It’s just awesome – a great night for our organization.”

“I learned a lot. Hopefully, we have a good run and my crew chief got a great car, I really have faith in him,” Gibbs added.

“It’s a good day, 1-2 for Gibbs,” Smith said. “I can’t thank all my guys on the Nos. 18 and 81 teams for getting us through these last couple of races. We just had to hang on. I felt like we were a bit tight. We didn’t have as best of a car as Ty did so I felt like we had a second-place car and that’s all I was going to get out of it. So, I tried there at the end; it just wasn’t enough.”

After winning the most recent ARCA West race at Portland International Raceway, Taylor Gray finished third at Bristol. Rookie Nick Sanchez returned to ARCA competition to finish fourth. He didn’t race in the ARCA race at DuQuoin State Fairgrounds; instead, Landen Lewis drove that No. 2 to victory. After his Venturini Motorsports team threw a bevy of adjustments on his No. 20 Toyota, Corey Heim finished fifth. Unfortunately, he lost further ground on Gibbs in the championship with two races left this season.

Gibbs dominated the day, posting the fastest time in practice and winning the pole. As he led, Sam Mayer and Jason Kitzmiller got together right in front of him, though Gibbs evaded being collected.

Caution for an incident involving Jason Kitzmiller and @sam_mayer_

Another caution featured a hard hit involving Andy Jankowiak, who was running around the top 10.

The final caution involved Drew Dollar and Thad Moffitt, who also got together earlier this season at Michigan International Speedway.

Despite the aggressive racing at this 0.533-mile short track, Gibbs leaves with an unofficial 26 point lead over Heim, his largest lead thus far this season.

Salem Speedway is the next stop on the ARCA schedule. The Sioux Chief PowerPEX 200 will take place on Saturday, Oct. 2 at 8 p.m. ET with TV coverage provided by MAVTV.

Now I know that Gibbs can drive but it seems week in and week out he has a serious mechanical advantage because of his Joe Gibbs equipment (which are older Cup cars reskinned in new bodies, whereas most of the field sometimes use models that are older). Hat’s off to Corey Heim for even being within 26 points.

ARCA officials need to wake up and figure out what the Gibbs team is doing to those cars. They have to be laughing at the officials for not figuring it out. But it will come out sooner or later.

Tom B
Reply to  Larry D

Yeah, just like all rich people must be breaking the law to make their money.
Also why does FS always omit Gibbs’ quotes about thanking the man above?

As the author, I’ll defend my reasoning. In my opinion, it’s the same reason I omit when a driver thanks the sponsors. Frontstretch doesn’t get paid to mention the sponsors. I won’t mention him thanking God & whatnot; that’s for the team & series itself to mention on social media, articles, etc.

Until you can provide actual proof JGR is cheating, please stop toting that fake news. Having talked to sources & been in the ARCA garage, JGR ARCA program is arguably the most-funded. Yes, in this situation, money is buying speed, though Gibbs is undeniably talented.