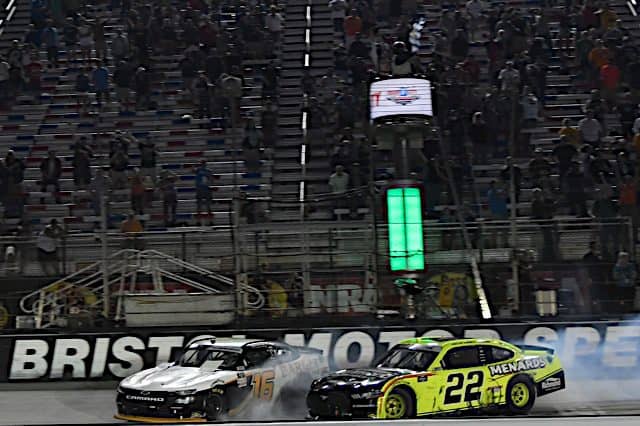 In a wild conclusion to the Xfinity Series regular season at Bristol Motor Speedway on Friday night (Sept. 17), AJ Allmendinger won the race and the regular season championship in the most improbable fashion: by taking the checkered flag while crashing into the inside wall.

A chaotic overtime restart saw Allmendinger charge to the lead after contact with Austin Cindric, his rival for the regular season title.

Coming to the checkered flag, Cindric got back to the throttle early off turn 4 and caught the left rear of Allmendinger’s No. 16 car, sending both cars sliding to the inside wall across the finish line. Allmendinger’s car was completely sideways but crossed the line ahead of Cindric to claim his fourth win of 2021.

“Went down to the last corner and I expected to get run into — it happened in the previous corner,” Allmendinger said, doing his victory lane interview outside the infield care center. “It’s frustrating to get hit that hard coming to the checkers, but we’re battling for the win and it’s Bristol baby, this is what it’s all about.

“I haven’t had a lot chances in my life to win at Bristol, so when you get a chance to go do it, you gotta do it. If I don’t take that chance, I don’t belong in the racecar because my team deserves to win.”

Overtime was set up with four laps to go as Justin Allgaier made contact with JR Motorsports teammate Sam Mayer while battling for second place, sending Mayer sideways into Josh Williams and spinning both cars around to bring out the caution.

Ahead of the restart, Cindric had led 74 of the 304 completed laps and was looking to close out his sixth win of the 2021 season.

During the choose zone, Cindric took the outside lane while second-place Allgaier lined up behind him. Third place Allmendinger decided to take the inside lane, allowing him to line up directly beside Cindric when the race resumed.

The final two laps brought calamity as the three leaders traded paint. Allmendinger bumped Cindric and took an early lead on the restart lap, but Allgaier and Cindric split Allmendinger three-wide as the two entered the final lap side-by-side.

Heading into turn 1 on the final lap, Allgaier overdrove the entry, which ran him up the race track and into Cindric, allowing Allmendinger to slip by both of them. In the final two turns with the regular season title on the line, Allmendinger had a two-car-length lead over Cindric. Cindric overdrove the final two corners in a desperate attempt to get side-by-side with Allmendinger, but the two made contact and crashed into the inside wall while crossing the finish line. When the checkered flew, Allmendinger had prevailed. It was the only lap he led all night.

After the pair hit the inside wall, Allmendinger’s car shot back into traffic and was hit hard in the driver-side door by Kaulig Racing teammate Justin Haley as well as in the rear by Myatt Snider. All drivers emerged unharmed.

“[I] got a chance on the bottom and I just slid into Austin trying to throttle up and stay on the bottom,” said Allmendinger, who claimed Kaulig Racing’s first regular season championship. “And then into [turn] 1, Allgaier had a run and there was contact there. […] It’s not the way you want to finish a race like that, destroying a lot of race cars, but I love you guys [fans]. It’s Bristol baby. It’s a dream come true for this year and thank you so much.”

Cindric’s disappointment was evident in his post-race interview but understood the intensity of the moment and all that was on the line. In fact, that intensity is why he was so frustrated.

Nonetheless, he gave credit where due.

“I thought we had a great battle all season long up to this point, so congratulations to Kaulig and AJ,” said Cindric, the defending Xfinity Series champion. “Those guys didn’t want us to win bad, and I hate that it destroyed our Menards/Richmond Ford Mustang. […] AJ obviously drove straight through us. That’s green-white-checkered racing, but man, what a hell of a race. I tried, but man. It’s a big bummer. Sorry to everyone that got involved in that wreck as well, that was really unfortunate.”

The first two stages of the race were dominated by Allgaier and Daniel Hemric. Hemric passed pole sitter Noah Gragson for the lead on lap five and exchanged the lead with Allgaier multiple times over the next 165 laps. Allgaier won stage one while Hemric answered with a win in stage two. During the stage two break, Allgaier was too fast entering on pit road while Hemric had a slow pit stop and was leap frogged by cars who took two tires or stayed out all together.

Their troubles allowed Mayer, the 18-year old from Wisconsin, to take over the race.

Mayer led a season-high 49 laps before losing the lead to Cindric on lap 230 — but not without incident.

While battling for the lead, Cindric and Mayer both bounced off the frontstretch wall, but both cars were able to continue. The two drivers remained 1-2 until the closing stages when Allgaier, who had driven back up to third place, began to challenge Mayer for second. Allgaier’s contact with Mayer on lap 297 then set up the chaotic run to the checkered flag.

Sneaking through the chaos, Riley Herbst crossed the line in his third, his best finish of the season. Allgaier led a race-high 92 laps and held on to fourth place, while Brandon Jones rounded out the top five.

Haley crossed the line in sixth, while Harrison Burton and Snider finished seventh and eighth, respectively. Mayer recovered from his spin to finish ninth, while Hemric rounded out the top 10.

The 2021 Xfinity Series playoffs will begin with the Alsco Uniforms 302 at Las Vegas Motor Speedway on Sept. 25 at 7:30 PM ET, with TV coverage provided by NBC Sports Network.

An exciting overtime finish to one of the best Xfinity races of the year.

If Matt Kaulig doesn’t run AJ fulltime in a Cup car next season, he’s not as good a businessman as I think he is. With the season he’s had, & becoming as much a fan favorite as he has. Fulltime sponsorship should be a slam dunk. I’ve always heard about “checkers, or wreckers.” Last night proved that it doesn’t have to be either, or, it can be both.

The lapped cars caused the problem for the leaders. It’s going to be worse in the Cup event.

I agree. There will be at least 14 lapped cars in no time. I don’t know how lapped cars stay out of the way at Bristol.