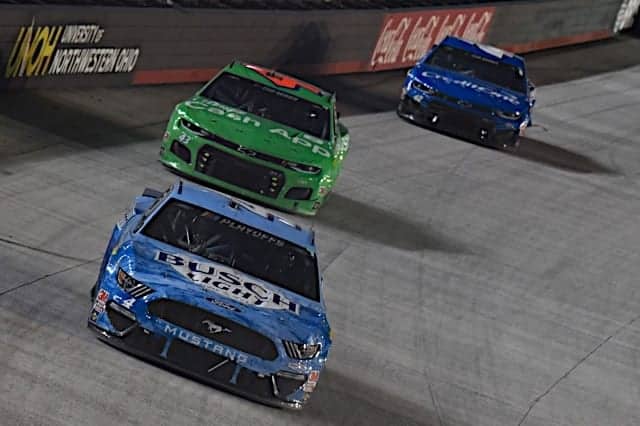 As NASCAR Cup Series drivers get ready for the final playoff race in the Round of 16, we’ll prepare our lineups for daily fantasy. Let’s set your NASCAR DraftKings rosters for Saturday night’s (Sept. 17) race at Bristol Motor Speedway.

It’s the second time that Cup has ventured to Thunder Valley this season, but it won’t be on the dirt like it was in March. Instead, cars will drive on the 0.533-mile concrete oval with high-banked corners. Bristol is vastly different from Richmond Raceway where teams ran last week. In fact, it’s fairly different from most short tracks on the schedule due to the 24-to-28-degree banking in the turns, but that doesn’t mean you shouldn’t look at past short-track events from this season (or other courses using the 750-horsepower package). You can still look at them to help you set your roster; just remember to look at each driver’s past history at Bristol as well.

As is often the case at short tracks, you’ll want to choose drivers who can lead laps at Bristol. The race is 500 laps, and usually several drivers will hold the top position for several circuits. Last year Kevin Harvick led 226 laps en route to victory, while Kyle Busch led 159. The only other driver who led more than 23 laps was Brad Keselowski with 82, but he ran into issues and finished 34th.

However, other races like the fall 2019 event saw several racers at the helm for 30 or more circuits, but no one broke the century mark. You might want to prepare for either outcome (two main dominators or multiple lap leaders) for your DraftKings contests.

Also, since there are a lot of laps in this race, it’s inevitable that the leader would put many a lap down. Certain drivers are able to take positions even while lapped and could provide some much needed salary relief in your DraftKings entries.

According to Sports Betting Dime, Kyle Busch is the favorite to win this Saturday’s race in Tennessee. His odds are currently listed at +400 while Kyle Larson (+450) and Denny Hamlin (+600) trail slightly behind him.

Before I share some of my picks for Bristol, let’s review what happened last week at Richmond.

Joey Logano, Harvick and Hamlin all had good results, but Hamlin had the better score on DraftKings. If Harvick hadn’t struggled so much with the handling of his car, he might have been able to grab some fantasy points for fastest laps. At least Ross Chastain did well again, moving up 10 positions from where he began to finish seventh.

Busch is the favorite to win (and most expensive on DraftKings) for a reason. I mean, for one, he won eight times at Bristol, more than any other active driver. Plus, he has six top fives in the past seven races, including three victories in fall 2017, spring 2018 and spring 2019. Additionally, he’s led 100 or more laps in six of the last 11 events there (excluding the dirt race). He’s truly been remarkable at Bristol.

Last week I wasn’t as sure of how the No. 18 Joe Gibbs Racing Toyota would do considering his recent results and performances at shorter tracks. However, he proved he can still run up front without any practice sessions, as he led 39 laps and almost won. If he hadn’t sped on the last round of pit stops, he looked to be the driver to beat near the end. Still, it showed that he is certainly capable of leading laps and possibly winning the race, which would likely produce a great score on DraftKings.

Larson wasn’t as strong as the JGR cars last week, but he did post 33 fastest laps. Part of this was because he had to drop to the back of the field before the race after failing pre-race inspection twice. He still came in sixth at Richmond and was second at Darlington Raceway the week prior. Also, at the two concrete racetracks of Dover International Speedway and Nashville Superspeedway, Larson finished second and first, respectively. He led 263 laps at Dover and nearly the same at Nashville in truly dominating performances.

The No. 5 Hendrick Motorsports pilot missed out on last year’s events at Bristol, but in 2019 he led 62 circuits in the fall race. Though Larson has yet to take home a Bristol sword in Cup, he did finish runner-up in both races in 2018, leading 200 laps in the spring event.

Larson is also favored to win here and should have another fast car once again.

It may feel like it’s getting old to continue to play Chastain, but it’s hard to avoid him when he keeps having good results. At Richmond, he brought home a seventh place and scored 53.4 fantasy points on DraftKings. He’s done well on most of the shorter racetracks this season, earning a second at Nashville and a third at Darlington.

The No. 42 Chip Ganassi Racing pilot didn’t drive for a well-funded team at Bristol in Cup but he did finish further from where he started in three events. Last fall while competing for Kaulig Racing in the Xfinity Series, Chastain led 117 laps before finishing second. That’s a bit unlikely to happen this week, but he should still record another top 10 if he can go by lapped cars.

Buescher has had varied results at Bristol over the course of his career. In the fall of 2016, he finished fifth for Front Row Motorsports; last year he gained 15 positions to end up in eighth place for Roush Fenway Racing. In between these events, Buescher had a couple of finishes in the teens – a 19th in 2018 and 17th one year later. At this low salary, sometimes all you need is just a few spots gained on the racetrack.

Unfortunately, he didn’t drive the No. 17 further from 18th at Richmond last weekend. Buescher was ninth at Darlington, though, and 13th at Martinsville Speedway earlier this season. He’ll roll off pit road from 25th, so he has a great opportunity to move up some spots by the end of the race, as long as he stays out of trouble.

Suarez has had two consecutive results in the teens, with a 17th at Richmond and a 13th at Darlington. He was also seventh at Nashville and ninth at Dover, the other two concrete tracks. Suarez should provide a good value for your DraftKings lineups due to his low salary.

At Bristol, Suarez has two eighth-place finishes, both in 2019 for Stewart-Haas Racing. But he now pilots the No. 99 car for Trackhouse Racing Team with support from Richard Childress Racing. Since he hasn’t run at Bristol for the team yet, I would look more on his results from this season to help you decide whether he should be in your lineup. He’ll start 21st Saturday night and should at least finish right where he begins, hopefully gaining some positions.

Preece, who is in the same range as Buescher and Suarez, should also provide good fantasy value for your DraftKings rosters. He’s gotten better in each race at Bristol (that wasn’t on dirt), culminating to a ninth place last fall. He also gained 21 positions to end in 12th last spring.

He’s struggled in recent weeks since Pocono Raceway but was able to earn a fourth place at Daytona International Speedway and a 12th at Darlington. Also, he was 18th at Dover earlier this year. Preece starts 27th and if he can hang in there and pass lapped cars ahead of him, he should end up around 22nd or further up the order.