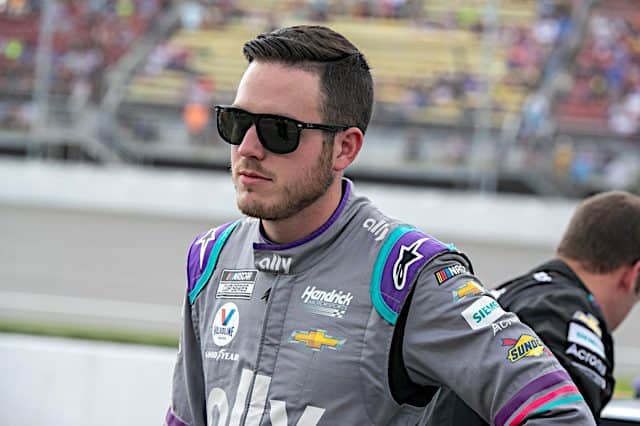 Kurt Busch and Alex Bowman are tied for the final playoff position above the cutoff heading to Bristol Motor Speedway. Who has the better odds of claiming the 12th slot?

Luken Glover: Kurt Busch has a whopping six wins in Thunder Valley, including five top 10s in the last seven races at Bristol. In 10 starts at Bristol, Alex Bowman has just two top 10s, both coming in 2018. While neither driver had the night they were looking for at Richmond, Busch has had much more momentum as of late. I wouldn’t count out the Hendrick Motorsports power of Bowman, but veteran experience has the advantage here. On the opposite side of things, I would not be surprised to see both drivers leapfrog someone like Aric Almirola this weekend either.

Dalton Hopkins: If you look at either driver stat, Busch has an average finish of 14.0 in his 40 starts at The Last Great Coliseum. Bowman, with his 10 starts there, has an average finish of 22.0. Busch ran into some bad luck at Richmond Raceway last weekend, but don’t forget that he had that luck while running near the front. That was his first finish outside the top 20 since the Coca-Cola 600. Despite Bowman’s success throughout 2021, Bristol is Busch’s track and always has been since his first career Cup Series win coming at the track in 2002. That being said, there is an excellent chance we could see both — or neither — of them make the Round of 12. After all, in 11th place is Almirola, and he’s only three points to the good heading into the Bristol night race.

Stephen Stumpf: If there’s one thing that we’ve learned from Bristol over the years, it’s that the races can become chaotic at any moment. For the drivers hovering near the cutline, advancing to the Round of 12 may very well rest on keeping their cars clean for 500 laps. With all things equal, however, I like Busch’s odds of advancing over Bowman. Although Busch only has one win at Bristol in the last 14 seasons, he is still a consistent threat as he currently has four top-10 finishes in his last five races at the track. Bowman’s last top 10 at Bristol came in August 2018, when he finished eighth; since 2019, he has not finished better than 15th. In terms of momentum, Busch and his teammate Ross Chastain have been red hot in the past few weeks, while Bowman has had just one top-10 finish in the past six races. Ultimately, I think that both drivers will make it to the Round of 12 over Almirola, who is just two points ahead of the cutline. But between Busch and Bowman, I expect Busch to run much better on Saturday night (Sept.18).

See also
Waid's World: In The Past Junior Johnson Dominance on Short Tracks – Even Bristol – Was Routine

The Cup Series will race on Easter Sunday next year. Is it a good move or a bad idea?

Hopkins: Religious beliefs aside, the more breaks for drivers, teams and everyone that is a part of the NASCAR circuit, the better. We saw two straight weekends of off time for drivers this year and found ourselves craving our beloved racing action during the Olympic break. That craving is a good thing. Sports thrive off of built anticipation. Not to mention, the men and women that work behind the scenes of the sport deserve at least one or two weeks off every once in a while.

Stumpf: I’m not opposed to the idea of racing on Easter. NASCAR has been experimenting with the schedule in the past two seasons, and the decision to schedule a race on the night of Easter is something that I applaud them for trying. However, I imagine that the teams would object to racing on Easter Sunday. The day itself aside, Easter has traditionally been an off week for the Cup Series, and drivers and teams alike commented about how much they enjoyed the two-week Olympic break in August. Instead of adding more bye weeks, the 2022 schedule has removed a bye week and instituted a race on what has traditionally been a break for people on the grinding schedule. In addition, potential viewers may be too occupied with friends and family to tune in for a race on Easter. That being said, I am excited to see how this race plays out next year. It may be a bust, but it may very well be a hit. And if it’s a hit, it would be something for NASCAR to consider adding for 2023 and beyond.

Glover: It is a bad idea for a couple of reasons. For starters, Easter fits on the same level as Thanksgiving or Christmas. Though Christmas is during the off-season, it is unlikely NASCAR would race on it if it were. Secondly, it doesn’t help the grind of the schedule. Several drivers have cited burnout, exhaustion and grueling travel as reasons to retire when they get older. This is no easy sport, and drivers need time to debrief and relax at least two or three times a year. One week is not going to help matters.

Speaking of the schedule, what do you think is the biggest positive change from last year?

Stumpf: World Wide Technology Raceway at Gateway. The 2021 schedule ushered in three new road courses that are on the schedule for 2022, but only one new oval in Nashville Superspeedway. With unequal turns like Darlington Raceway, different sets of banking in the two corners, and a length of 1.25 miles, there is no oval like Gateway currently on the schedule. It provides yet another addition to NASCAR’s brilliant schedule diversity, and the overhaul to the Cup Series schedule in the past two seasons has been remarkable after more than 15 years of running back almost the same races every season. Gateway also has the potential to be a huge hit as Chicagoland Speedway residents who have been itching to see racing since the removal of Chicagoland may flock down to the St. Louis area for the race at Gateway in June.

Glover: Homestead-Miami Speedway moving into the playoffs is a big gain. The track hosted arguably one of the best races of 2021 thus far and has had great racing for years. It’s not your average intermediate track, and it will feature many storylines amongst the playoff drivers. Moving Richmond out may not be the best move, but it will be great to see Miami back in the playoffs once again.

Hopkins: I’m going to avoid the L.A. Memorial Coliseum-sized elephant in the room here. The most positive change is the return of Homestead in the playoffs. While I know many would relish the idea of the circuit returning as the championship event, it’s still a good step in the right direction to at least place it in the playoffs. Homestead has seen plenty of interesting races in the last few years with its multi-groove lanes providing drivers of all backgrounds opportunities to thrive and possibly win. That has made it a favorite for fans, and the more fan-favorite tracks in the playoffs, the better.

The documentary on Formula 1 champion Michael Schumacher debuted on Netflix this week. What racing related person or topic would you like to see covered in-depth?

Glover: It has only been a year-and-a-half since it took place, but an in-depth feature on Ryan Newman‘s crash would be intriguing. There is still information that has not been disclosed, and there is some that may legally not be allowed to. Still, it would be compelling to get an analysis from different sides and maybe talk to some track medical crew members about what that experience is like.

Hopkins: It’s always been a remote dream of mine to create a movie based on the life story of Dale Earnhardt Jr. Everyone knows — or at least kind of knows — the legend of the intimidator and his racing prowess, but not many consider the struggles of his son. I know plenty of people will jump at the chance to say that Little E was handed everything because his father was a NASCAR legend, but that simply isn’t true. Not many know about his struggle of being shipped to military school against his will or about how he survived his house burning down in the middle of the night. Of course, that’s not even mentioning the death of his father and the ensuing drama that occurred with his race team afterward. Dale Jr. struggled plenty, and for that purpose alone folks should see the life story of one of NASCAR’s most influential drivers.

Stumpf: I’d like to see a documentary on the Cup Series rookie classes from 1999 to 2002. That four year span introduced the Cup Series world to Tony Stewart, Matt Kenseth, Dale Earnhardt Jr., Kevin Harvick, Kurt Busch, Jimmie Johnson, Newman and many more. Those four seasons ushered in a new class of young drivers that dominated for more than a decade and became the faces of NASCAR during its commercial peak. I think a documentary discussing these rookies and their resulting careers would prove to be popular, and it would potentially revive the interest of present-day NASCAR in fans who had watched the sport in the early 2000s.

Remember when the second Bill France made the horrible move of taking the Southern 500 to California? This schedule makes that move look brilliant. (It wasn’t. Had the smoker lived, we would be watching something else.) His grandson will kill it soon enough. Enamored with racing west of the Mississippi, needs to be moderate at best.
I may be dead in a couple years, but they will crawl back and Moody, et. al. will revise history — again.