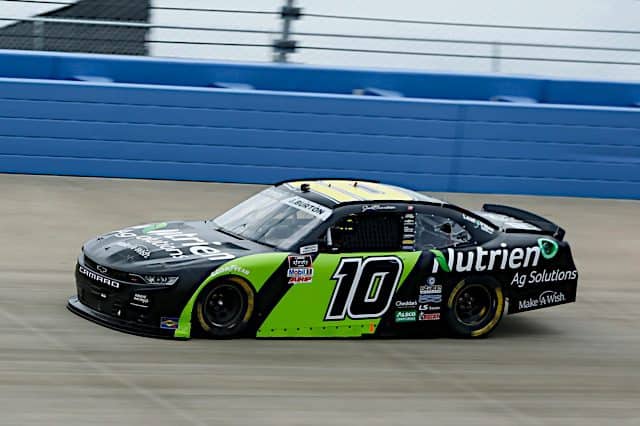 UPDATE, Sept. 21: Kaulig Racing President Chris Rice confirmed to Frontstretch that Nutrien Ag Solutions isn’t returning to the team and is getting completely out of NASCAR amid executive changes at the company.

“So maybe one day, we would get them all back and get that group of people back and I know we will. But they’ll come back. It’s just a matter of time.”

.@C_Rice1 confirmed to me this morning the AP report that @NutrienAgRetail won't return to @KauligRacing.

It's getting completely out of #NASCAR amid changes among its executives.

Nutrien Ag will not sponsor Kaulig Racing in 2022, according to an article from the Associated Press published on Sept. 17.

The 2022 season will be a major leap for Kaulig Racing, as it will field two teams in the Cup Series in addition to its three-team Xfinity Series program. Justin Haley is set to drive full time in one entry, while AJ Allmendinger pilots the second car in select races while continuing his Xfinity campaign. However, Kaulig will now have to find new sponsorship for some of the races next season.

Nutrien Ag has sponsored Kaulig since 2019, and it has been the primary sponsor for 10 of the 25 races on Jeb Burton’s No. 10 Xfinity car in 2021. Burton’s role within the team for next season has not been announced.

Burton, who notched his first Xfinity Series win in a rain-shortened race at Talladega Superspeedway in April, will look to finish out the season strong and compete for the Xfinity Series championship along with teammates Allmendinger and Haley. The Xfinity Series playoffs will begin after the conclusion of tonight’s race at Bristol Motor Speedway.