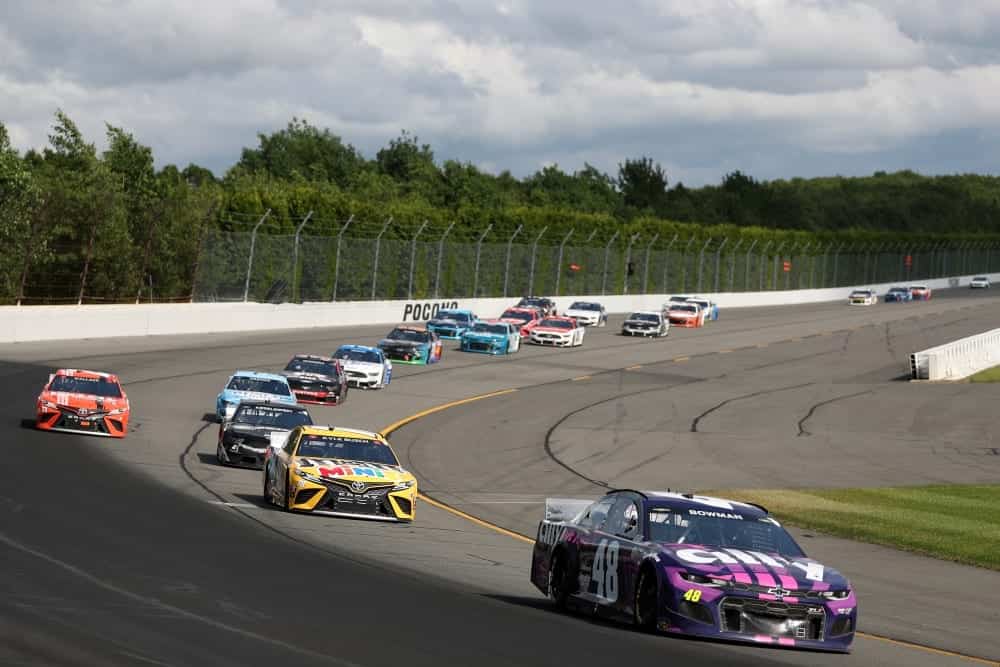 Pocono Raceway finally got to show NASCAR fans exactly how a doubleheader weekend can work.

The Pennsylvania racing community and its surrounding areas responded beautifully, selling out the infield camping areas and packing the grandstands on both Saturday and Sunday.

Everything at the racetrack felt perfect. But in the end, perhaps it wasn’t.

No matter the at-track success of the one-of-a-kind event, Pocono won’t be hosting a doubleheader next year – or a second date at all for that matter. Instead, one of its dates was abandoned and given to Worldwide Technology Raceway at Gateway, which welcomes the Cup Series to St. Louis for the first time in the modern era.

Before I continue, I should clarify a couple of things: First and foremost, Pocono is very dear to my heart as a 20-year resident of the same county in which the track lies. I have also done work for the raceway this year to help promote its 50th year of hosting races.

Additionally, I love the fact NASCAR is heading to a new-but-tested market, particularly via a unique track in Gateway that isn’t just another cookie-cutter.

As a journalist, I acknowledge there’s a heavy Pocono bias here. But I’m also realistic and pride myself on being fair across the board.

The buzz at Pocono felt electric. Even on Friday of race weekend, when ARCA was the only series on track, you could feel a sense of hype and enjoyment from the small but reasonable crowd that shuffled into the grandstands for a 6 p.m. ET race.

Saturday kicked off with an eventful Truck Series race and finished with last-lap Cup drama when Kyle Larson‘s left-front tire failed entering turn 3, allowing teammate Alex Bowman to scoot through to an unexpected third win of the year.

That was followed up Sunday by Xfinity Series race that featured five drivers who led 10 or more laps and another Cup race that felt completely different from the day prior. While the Saturday race featured on-track battles and multi-car incidents, Sunday’s was dictated by fuel strategy and long runs, a different complexion all together and won by Kyle Busch.

It was an experiment, sure. Pocono was the first track to schedule a doubleheader for the 2020 season but other tracks were forced to follow suit in the midst of the COVID-19 pandemic.

Pocono Raceway’s leadership was tasked with putting on a weekend event worthy of drawing fans for two races by the same series and hit a grand slam.

Why, then, is NASCAR not allowing the family-owned facility another doubleheader in 2022?

Unfortunately, the likely answer is a simple one: television.

As evidenced by another 2022 schedule announcement – shifting the Busch Clash to the Los Angeles Memorial Coliseum from Daytona International Speedway – NASCAR is more and more a made-for-TV sport.

That’s not an inherently bad thing. More new venues, more data-improved broadcasts and more scheduling risks make the race-watching experience at home more enjoyable. A rating that low would give any sport or television executive pause and question why to continue pursuing a novelty not well-received statistically.

But the question begs asking: Who’s to blame for such dismal ratings?

Frankly, the answer for me comes back to television – or in this case, NBC Sports.

The doubleheader appeared poorly marketed to TV viewers until race week, which is typically a fine strategy. That shouldn’t be expected to work, though, in an atypical leadup.

The Cup Series almost never runs on a Saturday afternoon, let alone twice in the same weekend. But as the second weekend of NBC’s 2021 coverage, Pocono took a backseat to Nashville Superspeedway, a venue new to the series this year as NASCAR expanded into yet another underserved market.

As a sanctioning body, NASCAR did its job to ensure the doubleheader ran smoothly and without issue. As a venue, Pocono Raceway packed its stands and campgrounds with tens of thousands of fans.

But the racetrack isn’t responsible for getting people to tune in to NBC Sports Network or their preferred streaming device, making it hard to fault Pocono for that flaw.

And so with the disappearance of the short-lived doubleheader comes the evaporation of Pocono’s second date, long after the track redeemed itself in the eyes of fans, drivers and industry members. Next year marks the first since 1981 in which there will only be one Pocono date on the schedule.

It is also noteworthy, as Motorsport.com writer Jim Utter pointed out, that the facility – one of only a few tracks not owned or operated by either NASCAR or Speedway Motorsports – is forced to watch as one of its dates simply slides into oblivion.

Regarding @PoconoRaceway: Under realignment, curious how #NASCAR can simply "eliminate" one of its race weekends and move it elsewhere. Could it do the same to a Speedway Motorsports track as well?

The track’s founding family, the Mattiolis, have roots so deeply tied to the France family, a connection that seems to ensure Pocono won’t be disappearing from the NASCAR schedule altogether any time soon.

It does, though, mark the end of an era. What a shame the doubleheader was a one-and-done for fans.

For years tracks only had one year contracts. Brian signed a five year contract which I think expired leading to the current situation of one year contracts. This returns NASCAR to the flexibility they need to grow the sport.
I thought the double header was a great idea. I immediately thought it would be good for Atlanta and Michigan. They need a shortened season.
However the sport has now become dependent on tv money. Sadly TV now calls the shots. Hence the dumb start times for races and stage racing. And now they will determine who gets races and who doesn’t.

My guess is that if ISC owned the track there would still be two events per year.

For years everyone knocked the racetrack as boring with no action, saying it should only have one date. Now it has and you’re still complaining.