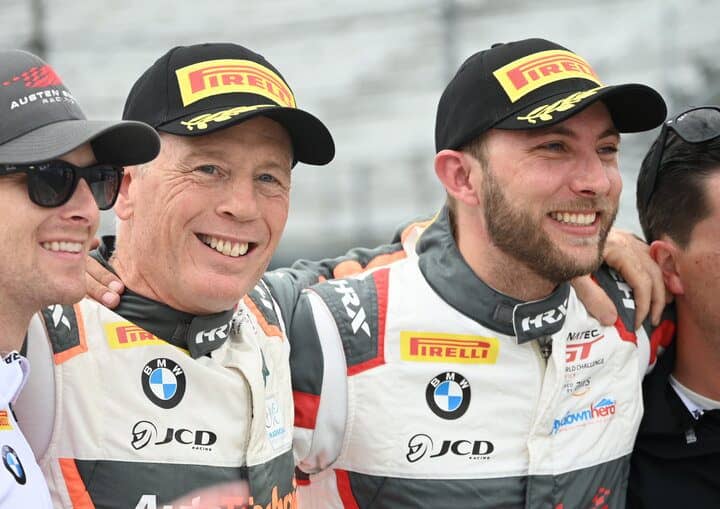 WATKINS GLEN, N.Y. – AutoTechnic Racing’s John Capestro-Dubets ran down Classic BMW’s Toby Grahovec Saturday (Sept. 18) and passed him for the lead with half a lap to go.  From there, Capestro-Dubets pulled away to give himself and teammate Tom Capizzi their first Pirelli GT4 America SprintX victory of 2021 at Watkins Glen International.

“That’s a dream come true.  It’s what every racer dreams about, last lap, make it happen,” Capestro-Dubets told SRO America’s Amanda Busick after the race.  “[There’s] tough competition here, so it’s an honor to be on the top step [of the podium].”

For teammate Capizzi, it’s his first professional victory of any kind.

The grid was set off of a topsy-turvy qualifying session at 8 a.m. Saturday morning that lasted for only a couple of minutes before a red flag due to a crash for James Walker.  As a result, Capstone Motorsports’ Kris Wilson put his Am-class Mercedes-AMG GT4 on the overall pole.  His time at the front of the field was very brief.

Wilson led the field to green very slowly.  Classic BMW’s Stevan McAleer timed the start perfectly from third on the grid to get past Wilson and Kenny Murillo to take the lead.  Once out front, it did not take long for McAleer to drive away from the field as Wilson and Murillo fought for second.

McAleer’s advantage was five full seconds barely three laps into the race.  Wilson ended up dropping out 15 minutes into the race due to an alternator belt failure.  Capizzi was able to get past Murillo and solidify second.

By the time the mid-race pit stops came around, McAleer’s advantage was up to 10 seconds.  A good stop from the Classic BMW increased that lead up to 12 seconds at the end of the pit window.  Capestro-Dubets and Murillo Racing’s Christian Szymczak gave chase.

In the closing laps, Capestro-Dubets was able to catch Grahovec.  The final lap saw Grahovec go wide exiting turn 1.  Capestro-Dubets made a move to the inside entering the Esses, but Grahovec blocked that.

Ultimately, a twitch in the Inner Loop was all it took.  Capestro-Dubets saw the lost momentum and swept around the outside.  By the time they entered the Boot, the deed was done.

Capestro-Dubets and Capizzi’s margin of victory was originally 1.529 seconds over Grahovec and McAleer.  However, things changed hours after the race.

UPDATE: McAleer and Grahovec have been stripped of their second-place overall finish and the Silver class win due to a camber violation.  They were moved to the rear of the field.  They also had to give back the trophies Sunday morning.

After the penalty, Szymczak and Murillo inherited second-place and the Silver class win, 1.613 seconds behind.  The Heart of Racing’s Ian James and Gray Newell were third in their Aston Martin, while WR Racing’s Paul Terry and Owen Trinkler ended up fourth after the 3D Povoledo Racing Aston Martin of Ross Chouest and Aaron Povoledo were given a one-place penalty for causing a collision.

The Pro-Am points will close up significantly, but for an unusual reason.  Point leaders Jason Hart and Matt Travis did not start the race because Travis is off-site in order to officiate his sister’s wedding.  The team is on-site and will compete Sunday.  Sitting the race out will not cost the NOLAsport teammates the points lead as their advantage entering the race was 63 points, more than two full races.

In Am, Wilson’s retirement gave the lead to Michael McAleenan, who was running in the top 10 in his McLaren.  However, he cut his left front tire inside of the mandatory pit window.  Nursing the car back to the pits knocked him out of the top 20 and gave the lead to SMOOGE Racing’s John Geesbreght.  Geesbreght and Kevin Conway were able to hold to take the class win in 16th overall.  NOLAsport’s David and Russell Walker were second, while Random Vandals Racing’s Al Carter and Paul Sparta were third.

Pirelli GT4 America SprintX teams will be back on track for the second race of the weekend Sunday morning.  The green flag is scheduled to drop at 11 a.m. ET.  The race can be streamed live on the GT World YouTube channel.