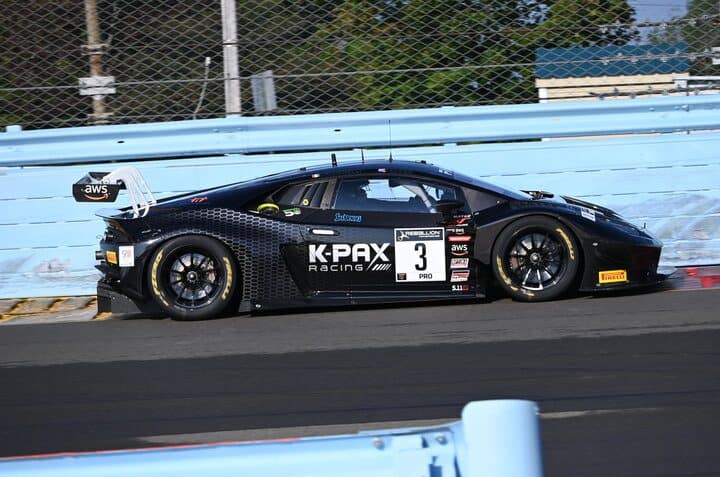 The session started on a damp track from overnight rain showers.  As a result, it was a bit dicey.

“The [conditions] were very tricky,” Pepper told Frontstretch after the session.  “The nature of the track is that it’s among a lot of shadows from the trees.  That made it hard for the track to dry.  It was dry in parts, really grippy, then slippery and very wet in others.

“It was all about finding the feeling.  Then, the red flag made things interesting.  On my best lap, I had to overtake two cars and also had a really bad run to [start the lap].  Had to overtake a car at the start of the lap.  So proud of the team.”

The red flag that Pepper is referring to occurred with seven minutes remaining when Rearden Racing’s Jeff Burton (not to be confused with NBC Sports’ booth analyst) spun exiting the Boot and tapped the tire barrier.  Burton attempted to turn around and continued, but appeared to high-center his Lamborghini Huracan GT3 in doing so.

The session resumed with a little more than three minutes remaining.  Effectively, that’s enough time to do a warmup lap and one lap at speed.  On the one lap at speed, Pepper turned in a lap at 113.857 mph to win the pole.

Pepper’s lap was two-thirds of a second faster than teammate Corey Lewis.  Turner Motorsport’s Michael Dinan will start third in his BMW, followed by Russell Ward in the HTP Winward Motorsport Mercedes.

In Pro-Am, DXDT Racing’s Erin Vogel qualified fifth overall with a lap at 109.260 mph, good enough to win the class pole.  Vogel was four-hundredths of a second faster than Zelus Motorsport’s Jason Harward.  Wright Motorsports’ Fred Poordad was third, then Taylor Hagler and Burton.  In Am, AF Corse’s Jean-Claude Saada was quickest with a lap at 109.007 mph, good for eighth overall.

The second session was a back-and-forth affair in the final minutes between Caldarelli and Wright Motorsports’ Jan Heylen.  Heylen set the first lap of the session in the 104-second bracket and looked good for pole.  However, Caldarelli set the fastest lap of the whole weekend at 116.022 mph to win the pole.

Pro-Am was led by Heylen in second overall.  Heylen’s lap at 115.955 mph was nearly a half-second quicker than McMurry.  Cooper was third, then DXDT Racing’s Ryan Dalziel and TR3 Racing’s Giacomo Altoe.  In the Am class, Conrad Grunewald started the session a little late, but ended up fastest with a lap at 114.480 mph, good for 11th overall.

Following Burton’s incident in the first session, Rearden Racing’s Vesko Kozarov was unable to set a time in the second session.  The Utah-based operation will make repairs prior to the first race.

Race No. 1 for Fanatec GT World Challenge America Powered by AWS is scheduled to go green at 1:45 p.m. ET Saturday afternoon.  The race will be streamed live starting at 1:30 p.m. on the GT World YouTube channel.