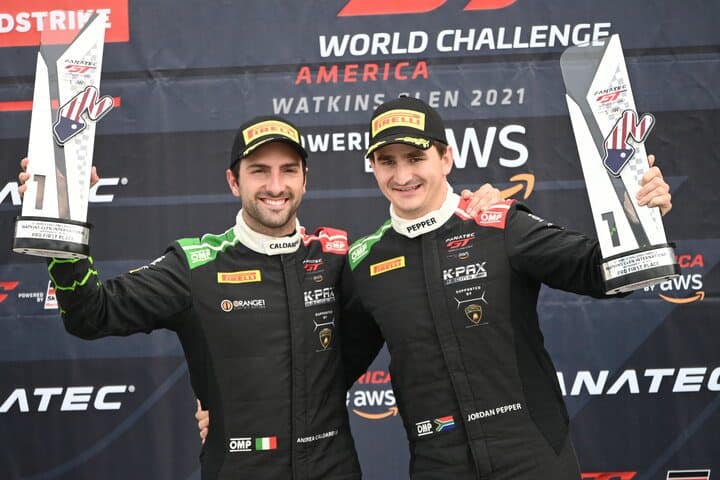 K-PAX Racing’s Andrea Caldarelli and Jordan Pepper dominated the first Fanatec GT World Challenge America Powered by AWS race of the weekend Saturday (Sept. 18) at Watkins Glen International.  The duo were never threatened on the way to their sixth win in nine races.

After qualifying, Pepper explained to Frontstretch what he felt was the key to doing well.

“No mistakes, no penalties, get to turn 1 first,” Pepper stated.  “Everything’s good, just keep our heads down and push on because the other guys aren’t going to heel off.”

Effectively, this is what happened Saturday.  Pepper got the jump from teammate Corey Lewis and settled into a small advantage.  Meanwhile, TR3 Racing’s No. 10 Lamborghini broke down just five minutes into the race.  Bill Sweedler pulled the car off at turn 4 to bring out the race’s only safety car period.

It was a wonder to see the No. 10 race at all.  On Friday morning, the team had an engine fail in the No. 10 during the optional Bronze driver test.  As a result, neither Sweedler nor teammate John Megrue got any official practice prior to qualifying.

Meanwhile, the second K-PAX Lamborghini had significant problems in the second half of the race.  The pit stop to switch to Giovanni Venturini and take tires was very slow, 10 seconds off the pace due to a belt issue.  Later on, the No. 6 Lamborghini seemed to be down on power and losing something like five seconds a lap to the leaders.  As a result, Venturini was lapped by teammate Caldarelli at the start of the final lap.  He would finish fourth in Pro and eighth overall.

Caldarelli and Pepper’s margin of victory was 9.193 seconds over Dinan and Robby Foley.  HTP Winward Motorsport’s Mikael Grenier and Russell Ward were third.

Further back, Taylor Hagler was on the move in her Acura.  She was able to dispatch of Zelus Motorsport’s Jason Harward for third, then ran down Vogel.  A couple of laps later, Hagler was able to get past Vogel for second.  She was six seconds behind Di Meo once she got into second in class, but able to match his pace.

The pit stop changed things up significantly as Racers Edge Motorsports got Jacob Abel out quickly.  That allowed him to jump over the Compass Acura into the class lead.  Much of the remainder of the race was a duel between Abel and Matt McMurry.  Abel was never able to get too far ahead, but he was able to outlast McMurry to earn his first career class victory.  For Hagler, it is her second win of the year.

Hagler and Abel’s margin of victory was 14.344 seconds over Vogel and Michael Cooper.  TR3 Racing’s Giacomo Altoe and Martin Fuentes were third after a race-long battle with Wright Motorsports’ Jan Heylen and Fred Poordad.  Ian Lacy Racing’s Frank Gannett and Drew Staveley were fifth.  Di Meo and McMurry were docked a lap after the finish, dropping them from fifth overall to 12th.  When a reasoning for that move is announced, we will update this article.

In the Am-class, Sweedler pulling off in the opening laps automatically gave the victory to AF Corse’s Conrad Grunewald and Jean-Claude Saada.  The duo ended up finishing a lap down in 11th.

Fanatec GT World Challenge America Powered by AWS teams have one more race this weekend at Watkins Glen International.  That race is scheduled to go green at 1:05 p.m. ET Sunday.  Coverage is scheduled to start at 1 p.m. live on CBS Sports Network.