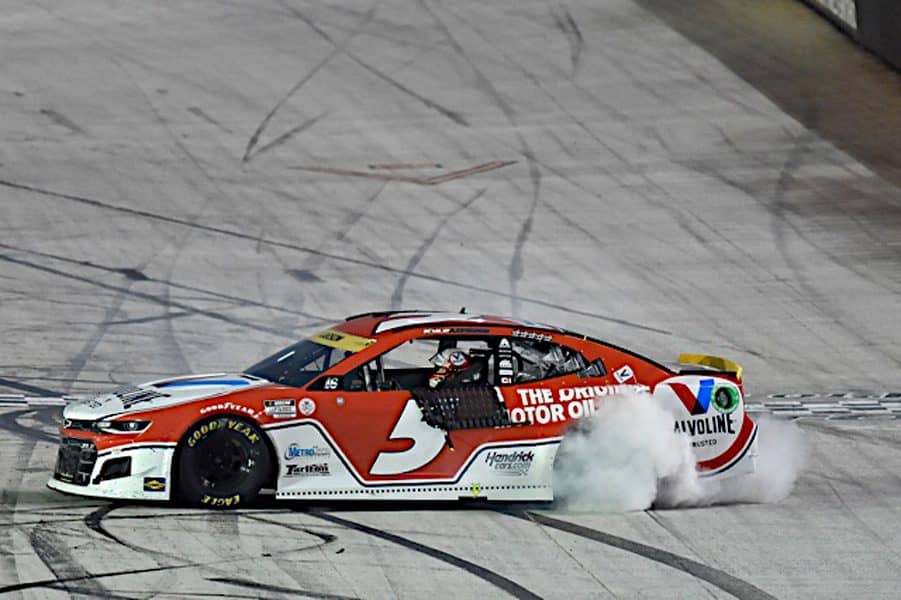 The familiar slogan of “it’s Bristol, baby” rang true on Saturday (Sept. 18) night, when late-race drama in the NASCAR Cup Series playoffs elimination race at Bristol Motor Speedway heated up as the night wore on. Kyle Larson was the ultimate survivor of the mayhem as his No. 5 Valvoline Hendrick Chevrolet found victory lane after a chaotic night at the half-mile track.

“That was an awesome race, that was cool to race for the win,” Larson said. “[Chase] Elliott holding up Harvick used his tires up.”

Despite strong Bristol performances in the past, Saturday night’s triumph was Larson’s first at the Last Great Colloseum.

“I love this place, this is by far my favorite track, and this is why,” Larson said, referring to the fans.

Byron survived a points battle with Aric Almirola and Tyler Reddick to secure the 12th and final transfer spot. Almirola, Reddick, Kurt Busch and Michael McDowell were eliminated after the checkered flag.

The cutoff race before the Round of 12 began with several drivers needing major points and things to go their way to make the next section of playoffs. Byron, McDowell, Kurt Busch and Reddick were below the cutline, while drivers like Almirola and Bowman tried to protect their title hopes and spot above it.

Truex jumped out to lead the first lap Saturday with Elliott in hot pursuit, but Elliott soon claimed the lead within the first 10 laps as Truex began to fade back and lose multiple positions, holding the lead through the competition caution at lap 40.

With the first pit stops of the night out of the way, Larson and Hamlin battled for the lead for the remainder of the stage but Hamlin got the better of Larson, as Bubba Wallace held the No. 5 up and allowed Hamlin to make a pass. Elliott’s pit road mishaps continued from last week at Richmond Raceway as he was sent to the rear for speeding on pit road.

Stage two began with Larson leading the field, but it didn’t take long for Keselowski to snatch the lead away. Both Hamlin and Larson got back by Keselowski for first and second a  handful of laps later, followed by a steadily faster Blaney. The first yellow flag for an incident flew at lap 168 for Cole Custer and Ryan Newman, a crash that also involved Wallace and Daniel Suarez.

A big issue for the No. 6 collects a few cars as we go to caution at @BMSupdates. pic.twitter.com/8zCp58swHN

During the caution, the playoff hopes for Almirola looked dark as his car began leaking fluid on the track. It delayed the green flag, but Almirola’s crew managed to repair the leaking oil line and keep the No. 10 on the lead lap.

On lap 220, the caution flew again for a multi-car crash triggered by contact from Corey LaJoie. A touch from the No. 7 sent Anthony Alfredo into the outside wall, the aftermath of which also collected BJ McLeod and Justin Haley. The red flag came out as well so that crews could clean oil off the track.

All right in front of #NASCARPlayoffs contender Joey Logano!

Larson held off Hamlin for the stage win as the focus was mainly on the bubble drivers battling for the twelfth and final spot to advance. Joey Logano, Harvick and Blaney also clinched a spot in the next round after the stage as well.

Harvick led the field to green to begin the third stage but Blaney soon passed him. Larson battled with Hamlin and Elliott for the majority of the stage, but soon after made contact with Hamlin, cutting the No. 11’s tire and sending the FedEx Toyota into the wall.

Prior to that caution, during a long green-flag run, the sixth caution came out due to Quin Houff losing a left rear tire and spinning out, which was followed by another caution for the same driver and reason. Elliott also clinched a spot in the Round of 12 after the No. 38 of Alfredo retired from the race.

Elliott got the better of Larson going green once again after battling back from a speeding penalty earlier on, leading to a battle for the lead between Elliott and the winless Harvick. Further back, Almirola and Byron were at different points in the running order but equally aware of their points situation right at the cutline.

Playoff drivers began to have issues beginning with 44 laps remaining in the race, as Kyle Busch lost a right-side tire. The No. 18 trundled down pit road and got trapped two laps down, barely hanging on to a playoff advancement.

As he tried to get a lap back, close-quarters racing between Harvick, Elliott and Larson resulted in Elliott suffering a flat left-rear tire after contact from Harvick. Christopher Bell also had a flat tire shortly after Elliott and Busch and lost a number of spots but remaining inside the top 12 in points.

In the end, after an exciting finish and battle, Larson won the race after a fight from Harvick while Byron finished third and made the next round of the playoffs.

Elliott and Harvick weren’t exactly pleased with each other after the race, with a furious Harvick calling Elliott’s racing “chickenshit.” The duo first exchanged words on pit road while surrounded and separated by NASCAR officials before talking after their TV interviews by the haulers.

Realizing they weren’t getting the private conversation they were looking for, the pair of past champions continued their discussion in the No. 9 hauler.

What a great race weekend. Shame one of them a year is now on the gimmicky dirt. The dirt will never even remotely produce a race like any of the 3 we saw this year on concrete. I can’t imagine any fan had rather see dirt than the action we saw the last 3 nights. Move it to a real dirt track.

Yep. Why haul all that dirt in and then have to clean it all back up just for a gimmick. This was, as you said, a great race weekend… with no dirt necessary.

Not to put too fine of a point on it. But compared to Saturday’s Xfinity race finish. The Cup race was almost boring. After the next round of eliminations we’ll see who the real contenders are. Or maybe we’ll just see again how good the Larson/Hendrick combination really is.