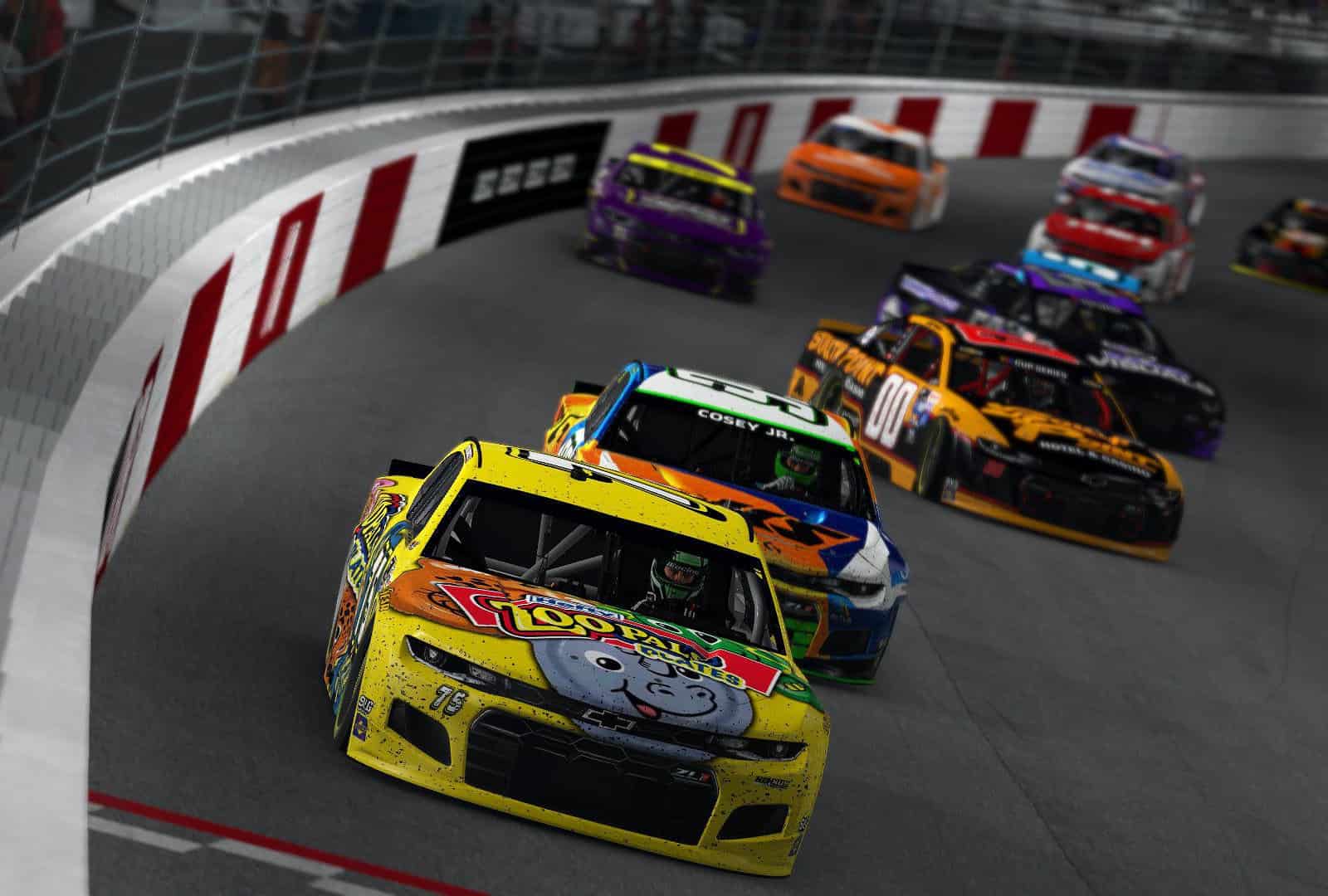 We’re halfway through September, and short tracks are back on the iRacing menu this week in the roundup. All three of our communities and pro series went to virtual tracks less than a mile long, with FTF at Richmond Raceway while 100% Cup and Road to Pro were both at Bristol Motor Speedway.

Road To Pro’s Qualifying Series only has one race left in their season before the Contender Round takes place. Both FTF and 100% are in the midst of their playoffs with only a handful of races left in the 2021 season. Take a look at how each of the races turned out in the past week in this week’s roundup.

The second race of the Round of 16 of the FTF Cup Series playoffs saw the trend continue at the start. Blake Reynolds, winner of the last three races in a row at Michigan International Speedway, Daytona International Speedway and Darlington Raceway, took the pole position at Richmond. The race, set for 250 laps, was dominated by Reynolds.

After leading 192 laps and winning both stages, it looked like Reynolds was en route to a fourth straight win. That was until a slowed, struggling Robert Dorman came across his nose and changed the complexion of the race. With a small bit of damage and pit strategies off sequence, Ryan Doucette took control of the situation.

In the closing laps, Michael Cosey Jr. held Reynolds back as Doucette was able to score his second victory of the season, securing his spot in the Round of 12.

Welcome to the Round of 12 @RyanDoucette77! Doucette holds off @windVOW8820 and @blakereynolds66 to score his second victory of the season at Richmond Raceway! pic.twitter.com/rjVHU8JVLm

With Reynolds and Doucette locked in with wins and Kevin King, Michael P Frisch and Garrett Konrath locked in by points, the final seven spots are up for grabs among eleven drivers. Brian Mercurio only needs seven points to lock in, but the remaining spots are all up for grabs.

Michael Guest, three-time winner in the regular season, hasn’t made a start yet in the playoffs, but even he still has a shot to advance if he shows on Sunday.

This week, the Road To Pro Qualifiers went to the Last Great Colosseum in Bristol, Tennessee. With only two races to go in this series before the Top 20 advance up the ladder, a good finish at Bristol could make or break an entire season. With more caution periods than the second split, this race had more attrition and players going for the win. A few of the front runners had issues as well, and that mixed up the running order for the win.

Ethan Lane took the pole and was dominant, leading the first 77 laps uncontested. A bad internet connection dropped Lane from the server while leading, ending his chances at the win and possibly his chances at advancing to the next round. Blake McCandless took control after Lane’s misfortunes, leading the next 54 laps unchallenged.

CHECKERED FLAG IN RACE 1!@Parker79p NAILS THE FINAL RESTART AND LOCKS HIMSELF INTO A CHANCE TO RACE IN THE @eNASCARCocaCola @iRacing SERIES!

In the second race of the night, a green flag look with an untimely yellow shaped the complexion of the event. While Seth DeMerchant took the pole position to start the night, Kollin Keister was the man for the most part. Keister pulled out to a large lead and was able to cut through the lapped traffic like butter.

After an early caution, the race ended up going more than 150 laps green flag racing with no stop. Pit strategy was varied across the board, but by pitting, usually there was a loss of multiple laps in the process with the combined pits. Keister and Liam Brotherton pitted and DeMerchant took back control.

The caution flew and only two cars were left on the lead lap. There were a few other drivers a lap down that were able to be waved around, including both Keister and Brotherton. As the race came into the final laps, Keister was able to get back on DeMerchant’s bumper, but DeMerchant held on for the win.

SETH DEMERCHANT TAKES THE WIN AFTER A GREAT BATTLE WITH KOLLIN KEISTER!

By my math and Garrett Mashburn’s points spreadsheet, eight drivers have locked into the top 20 based on points scored and the drop week that they have to fall back on. Donovan Strauss, Kollin Keister, Parker Retzlaff, Briar LaPradd, Jordy Lopez Jr, Seth DeMerchant, Cody Byus and Brian Mercurio should have nothing to worry about at Phoenix in two weeks.

The other 12 spots will be decided among a mathematically possible 36 drivers, but it will likely come down to anyone in the top 25 factoring in a drop currently.

With NASCAR Cup on Saturday once again, the 100% Cup Series was relegated to a Friday Night race weekend. 26 drivers showed up for the 500-lap event, but only two drivers completed all of them, while four cautions all night likely played a factor on the 0.533-mile oval.

Adam Benefiel wasn’t in a must-win situation, still in 11th in the playoff standings after missing Darlington and Richmond, but just to be sure, he took his series-leading ninth win of the season at Bristol Motor Speedway.

Benefiel started down in 12th, and while he already had a Bristol win in his pocket from earlier in the season, that was on dirt and this was back on the concrete. Bryson Hixenbaugh, locked in with the win at Darlington, started on the pole position.

Jon Dulaney took control of the majority of the race, leading 208 of the 500 laps and winning both stages. Benefiel was nearly as dominant, leading a share of 173 laps, and it worked out that he led the most important one, the final lap.

Moving on to the Round of 12, Benefiel joins Hixenbaugh and Dulaney as winners in the Round of 16. They’ll all also be joined by Cam Stone, Kevin Steele, Jason Taylor, Sean O’Brien Jr, Brandon Pierce, Preston Mccray, Dustin Hall, Demarius Hickenbottom and Ryan Samuelson.

Cody Burd, RJ Root, Mason Lowery and Chad Edwards have all been eliminated.

FTF Racing heads to Bristol Motor Speedway for the final race in the Round of 16 on Sunday night, live at 8:00 p.m. ET on BottomSplit.

100% Cup Series will start their Round 12 at Las Vegas Motor Speedway on Saturday night at 8:30 p.m. ET. This recap won’t be in the next issue, as it will happen after it is written. If the race is streamed, it will be live on 3 Wide TV.

Monday Night Racing continues to ramp up their fourth season. A new logo for the “Pro Series” was unveiled on Friday, and more announcements are expected before the November season commences.

Finally, the final Road To Pro Qualifying Series event will conclude in two weeks at Phoenix Raceway where 20 drivers will advance to the Road to Pro Contender Series, the next step on the Pro ladder.