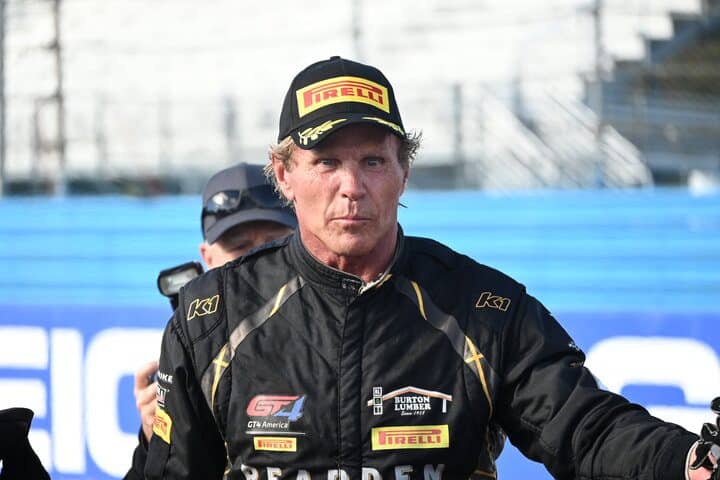 “The difference between [Saturday] and today was the car,” Burton told Frontstretch in the pits after the race. “There were some setup changes that [my crew] made that made the car easier to drive [for me].  When you have a car where you can tell what it’s doing, you can drive it really fast.”

Luck started from the pole by virtue of having the fastest lap in Race No. 1 on Saturday. However, he didn’t appear to have the same pace; perhaps the early morning temperatures played a role, or the changes that Rearden Racing made were key.

Burton pressured Luck over the first few laps of the race before getting a run on him on the frontstretch. He was able to make the pass stick in turn 1 to take the lead. From there, Burton slowly but surely pulled away.

Burton’s case was helped by the fact that Luck had to contend with Flying Lizard Motorsports’ Andy Wilzoch in the previous generation Porsche 911 GT3 R. The two Porsche racers fought hard for much of the race before Wilzoch was able to get past entering the Inner Loop with five minutes to go.

Luck wasn’t done yet. A lap later, he got a run on Wilzoch on the uphill run to the exit of the Boot, pulling alongside and appearing to be back in second place.  Then, contact was made and both drivers spun, with Luck nosing into the wall.

Luck limped his Porsche back to the pits and retired with a lap to go. Wilzoch was able to continue and finished second, but the SRO America officials determined that he was at fault for the crash. As a result, he was penalized one spot in class, dropping him to fifth overall.

Offically, Burton’s margin of victory was 72.347 seconds over Caesar Bacarella, driving a Lamborghini Huracan Super Trofeo by himself in the Invitational class for TR3 Racing.

“The Super Trofeo car was very good today,” Bacarella told Frontstretch. “I made up a spot early in the race, passing a GT3 car, super excited about that. Tried to keep a fast pace and came up second overall. Super happy.”

Zelus Motorsport’s Jason Harward was third in his Huracan GT3 after making an unscheduled stop early. Luck was credited with fourth, followed by Wilzoch.

In GT4, GMG Racing’s Jason Bell started from the pole and was never seriously threatened on his way to the weekend sweep. He ended up 7.928 seconds ahead of 3R Povoledo Racing’s Ross Chouest. RENNTech Motorsports’ Christopher Gumprecht was third, then Alex Welch and Sean Quinlan.

However, the end of the race was not without controversy. On the final lap, Robb Holland tried to go to the outside of Quinlan in turn 7. Contact was made, resulting in Holland bouncing off the outside wall, then spinning and nosing into the inside wall.

The contact is notable because these same two drivers came together Saturday exiting turn 1. In that instance, Quinlan spun and hit the Armco hard.

There are two more race weekends for GT America Powered by AWS teams, but only one counts for points. The series will be in action at Sebring International Raceway in two weeks for a couple of races, but these are considered to be invitational events that do not count for points. This is because the Sebring race weekend was created to replace the originally scheduled weekend at Canadian Tire Motorsport Park, cancelled due to COVID-19 and the ongoing United States-Canada border closure. The CTMP weekend did not include GT America since GT America had the standalone weekend in Nashville as part of the NTT IndyCar Series’ Big Machine Music City Grand Prix.

The final two rounds for points will be held at the Indianapolis Motor Speedway on Oct. 17. These events are on the undercard to the Intercontinental GT Challenge Indianapolis 8 Hours.