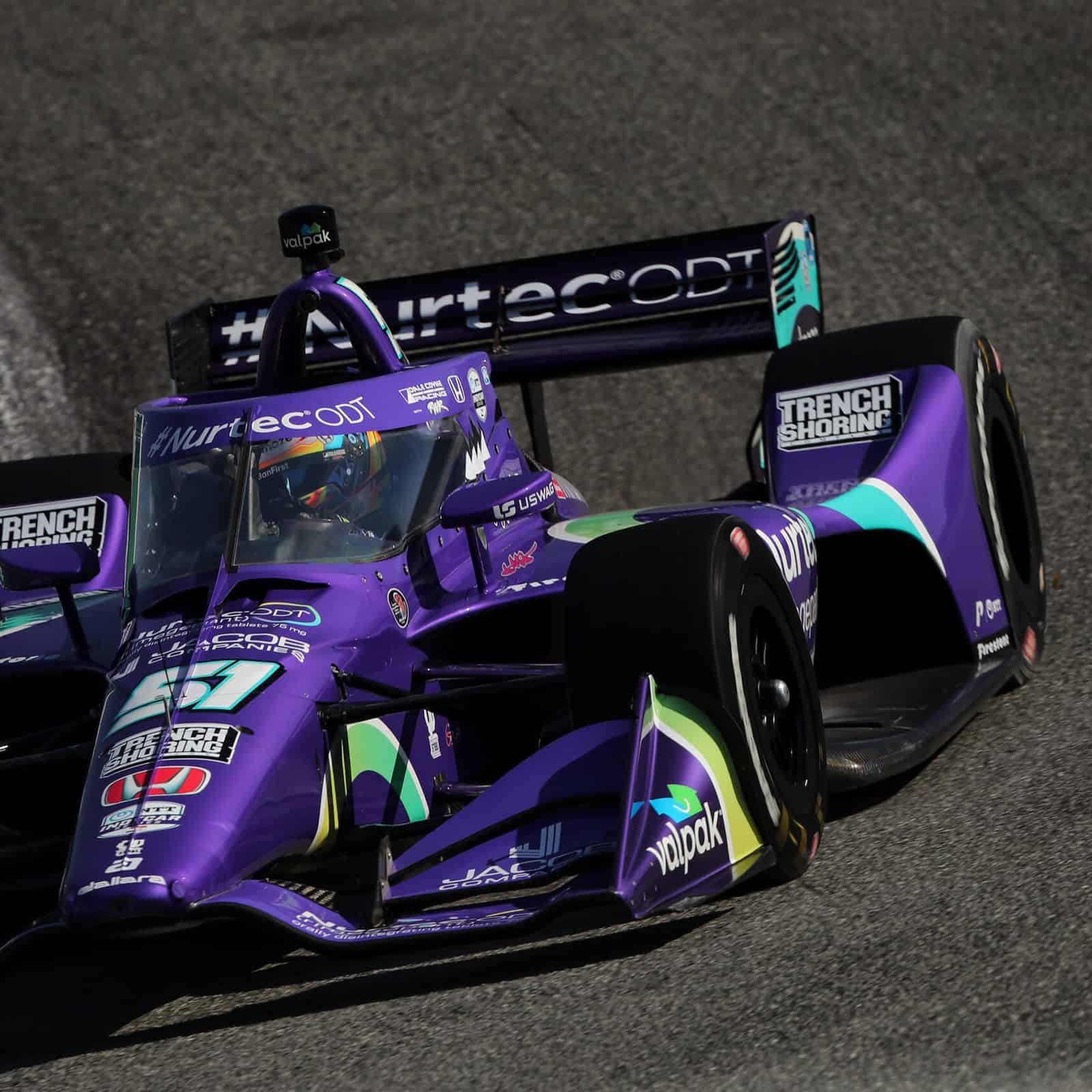 Starting 13th, Grosjean got to 12th place at the Andretti Hairpin after passing Graham Rahal and then went around Max Chilton and James Hinchcliffe going to turn 3 to get to 10th place. Following Alexander Rossi‘s contact with eventual race winner Colton Herta on lap 2 sending Rossi off track, Grosjean was now ninth at a track that historically has been difficult to pass on.

After the race’s only full course yellow ended on lap 4, Grosjean went to work again, overtaking Oliver Askew for eighth place on lap 7. Eighth place turned into sixth place on lap 10 after overtaking Pato O’Ward on track while Will Power pitted from second place with mechanical difficulties.

Grosjean’s first stint on new Firestone alternate red sidewall tires got him to the lead, but the next two stints on the primary black sidewall tires allowed the Indy road course polesitter to stretch his second and third stints longer than his rivals. After getting the lead again on lap 69, Grosjean led three laps before Herta retook the lead on lap 72 ahead of Grosjean’s final pit stop on lap 73.

By putting brand new red sidewall tires on the car at the final stop, Grosjean had an ace up his sleeve. With the red tires giving more grip at the tradeoff of a lower lifespan and Grosjean stopping later than any other driver doing three pit stops, the chase was on with a strategy that Grosjean and the team had modified during the first stint of the race.

“Through the first stint, the plan initially was to come very early in, like lap six or seven, put [on] the blacks because we were feeling the blacks were going to be a better tire,” Grosjean said. “Pato (O’Ward) was on blacks and he was struggling a lot, whilst on reds it was actually getting good on the pass, Ericsson, Dixon, Pato, some more on the first stint. I realized that we were pretty good on those tires.

“We put the black and it didn’t feel good. So I told my engineer, ‘Let’s go long, long, long. The last stint we’re just going to go as hard as we can on the reds and make up for it.’ Now it’s easy to say, but I wish we would have pitted five laps earlier because the tires were still very good at the end.”

Starting the final stint in seventh place, Grosjean set his fastest lap of the race on lap 76 then overtook Pagenaud for sixth on lap 79, Ericsson for fifth on lap 80, Pato O’Ward for fourth on lap 81 and Rahal for third on lap 84.

Grosjean was the fastest car on track, turning laps nearly two seconds per lap faster than Herta as the race drew toward its conclusion. However, as Grosjean approached the lapped car of Jimmie Johnson, a struggle began.

Johnson’s teammate Palou was in second place and Grosjean was clearly the faster car. Johnson would do what he could to make life difficult for Grosjean, but Grosjean had other ideas as the pair approached the Corkscrew with seven laps to go.

Race control took no action after the contact and Grosjean finished just 3.7 seconds behind Herta and Palou.

“The last stint was very fun because we were on new tires, fresher than everyone else so that was exciting,” Grosjean said on pit road after the race. “The middle part of the race where we went long on those blacks just to make that strategy work was a bit less fun and a bit hairy at some stage, but it ‘s been a great day, amazing.”

“I’m sorry to Jimmie for the contact out there. I think he was trying to protect Alex (Palou) a little bit and I wanted to go and chase Alex. But yeah, P13 to P3 today, it’s a pretty good day.”

Greeted by cheers as he climbed out of his car and onto the podium, Grosjean was elated at his result, even if it wasn’t on the top step of the podium.