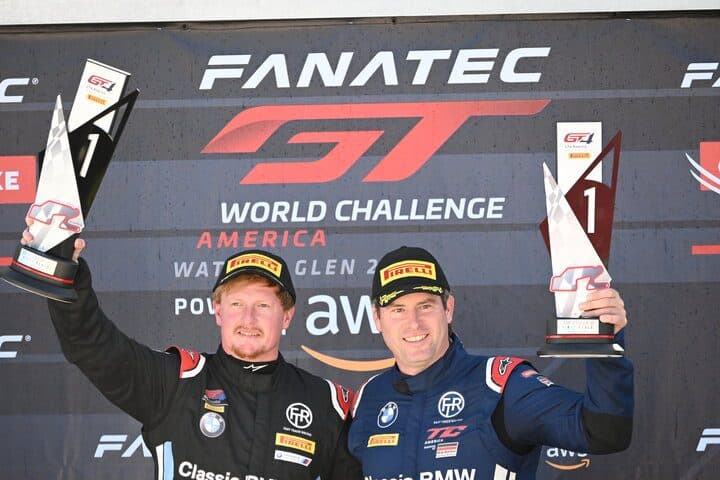 WATKINS GLEN, N.Y. – Classic BMW’s Stevan McAleer and Toby Grahovec woke up Sunday morning (Sept. 19) and discovered that they’d lost their class victory and second-place finish from Saturday in technical inspection. The goal quickly became to get it back.

McAleer was able to get past BSport Racing’s Bryan Putt for the lead with 19 minutes to go. From there, he held on to win Pirelli GT4 America SprintX Race No. 2 at Watkins Glen International.

“Toby [Grahovec] passed a lot of good drivers and cars, which really helped me once I got in,” McAleer told Frontstretch in victory lane. “We pitted at the minimum drive-time. I was fortunate to get four or five clean laps before we really started to see the swapover with the other drivers.

“We leap-frogged a lot of drivers already on pit road and we had more pace. [Stephens] was keeping us honest. I felt pretty confident that I could have held him off.”

The Racers Group’s Spencer Pumpelly won the pole on Saturday and managed to pull out a decent lead early on. Behind him, Elliott Skeer in the Premier Racing Porsche was close behind. Due to the penalty, Grahovec had to start from the very rear of the field. In the first half of the race, Grahovec was able to move up from 30th to 15th.

Behind Pumpelly, the man on the move was 3R Povoledo Racing’s Aaron Povoledo. Povoledo started fourth and moved himself up into second 13 minutes into the race. Once past Skeer, Povoledo turned in the fastest laps of the race to run down Pumpelly within two laps.

However, before Povoledo could make the move, Stephen Cameron Racing’s Greg Liefooghe had his hood come up on the backstretch, blocking his vision. Liefooghe pulled off at the Inner Loop, but not in a safe position. This brought out the first yellow of the race.

The restart came right before the mid-race pit window. Grahovec was among those who pitted as soon as possible in order to hand over to McAleer. This gave McAleer some open running before the pack came back together.

Povoledo took the lead away from Pumpelly in the middle of the pit window. Ultimately, Povoledo and Pumpelly ran for an additional eight minutes before making their stops.

Unfortunately, 3R Povoledo Racing’s newness hurt them. The team didn’t even exist three weeks ago at the last round.  The pit stop ended up being botched, which cost Ross Chouest dearly. By the time the stops were complete, Chouest was down to fifth.

That wasn’t the end of Chouest’s problems. On his out lap, WR Racing’s Paul Terry made a move for position in turn 8. Contact was made, resulting in both Aston Martins spinning out. Terry was out due to a suspension issue, but Chouest was able to continue. Chouest and Povoledo finished 20th (ninth in Pro-Am), not a reflection of how they raced.

An excellent pit stop gave Putt the lead with a three-second advantage over Derek DeBoer. McAleer completed the stop sequence in seventh, then gained two spots when Chouest and Terry wrecked.

McAleer then knocked off his foes, one by one. Michai Stephens in the Conquest Racing West Mercedes followed suit. The pass for the lead came in turn 1, just a couple of laps after the pit window closed.

The race was setting up to be a nice battle for the win between McAleer and Stephens, but the race effectively ended with 12 minutes to go. The leaders ran up on the slow BMW of Paul Sparta in the Boot. DeBoer was three-wide with Ryan Dexter and Tim Barber when they approached Sparta. Barber had to avoid Sparta, creating a squeeze play.

Contact was made between the three cars, resulting in DeBoer spinning and hitting the Armco hard. He then spun across the track and was hit by Adam Adelson. This put the race under yellow, where it finished.

Stephens and Colin Mullan ended up second, while Putt and Kenton Koch were third at the line. However, a post-race drive-through penalty was assessed to Putt’s Aston Martin that dropped the team back to 17th overall.  That elevated the Heart of Racing Team’s Ian James and Gray Newell to third overall.  BimmerWorld Racing’s Bill Auberlen and James Walker came from the rear to finish fourth, while Saturday’s winners from AutoTechnic Racing, John Capestro-Dubets and Tom Capizzi, were fifth.

McAleer and Grahovec won the Silver class over Stephens and Mullan. Barber and Cole Ciraulo were third in class, followed by Ryan and Warren Dexter and Murillo Racing’s Kenny Murillo and Christian Szymczak.

James and Newell won the Pro-Am class in third overall. Walker and Auberlen were second, then Capestro-Dubets and Capizzi. Point leaders Jason Hart and Matt Travis from NOLAsport were fourth, while Rennsport One’s Charlie Bellaurdo and Trent Hindman were fifth.

The Am class was won by SMOOGE Racing’s Kevin Conway and John Geesbreght in 14th overall. Capstone Motorsports’ Kris Wilson and John Allen were second after a late charge. NOLAsport’s David and Russell Walker were third.

Pirelli GT4 America SprintX teams will be back in action at Sebring International Raceway in two weeks. Round No. 11 of the championship is scheduled for Oct. 2 at 10:45 a.m. ET.