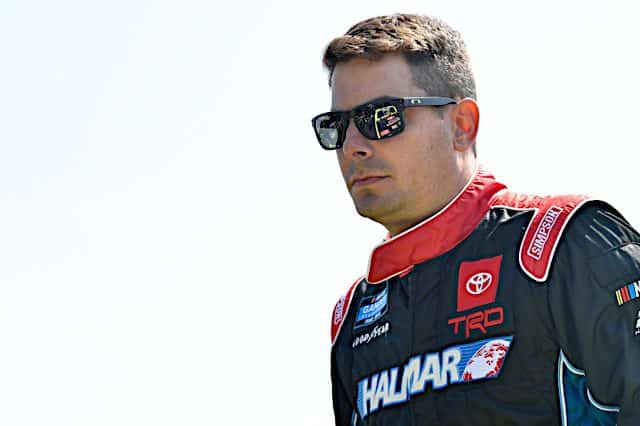 Stewart Friesen dominates the Fonda 200 and has the speedway deeded to him, while late model giants flex their muscles at Knoxville and Texas.

A flat tire 68 laps into Saturday night’s feature was all Stewart Friesen needed. Opting to stay on track under the scheduled midway break on lap 100 after bringing out the yellow for a flat on lap 68 shortly after taking the race lead, Friesen restarted the second segment of the Fonda 200 and led all 100 laps, cruising to a $53,000 victory at a track that he has completely dominated in 2021.

Though Friesen stayed out front for the entire second segment, Gloversville, N.Y.’s Rocky Warner did manage to make the No. 44 sweat on two occasions. Lap 130 saw Warner get alongside Friesen as two lapped cars ran side-by-side and blocked the track, forcing Friesen to throw a banzai move on lap 131 to the high side of turn 3 that saw him clear both lapped cars and drive away. Friesen was again caught by Warner inside of 15 laps to go, but a lap 191 yellow flag derailed Warner’s momentum.

Barely two weeks removed from having his race team barred from the racetrack under COVID-19 protocols, Winfield, Tenn.’s Mike Marlar continued his team’s momentum from Eldora, taking the lead back from series points leader Tim McCreadie on lap 91 and driving away to score the win at Knoxville, the richest super late model victory of his career.

Marlar bested McCreadie on a lap 41 restart after the race was red-flagged to allow teams to refuel their racecars, and led up until lap 90, when his No. 157 car missed the line in turn 2 and washed up the track, allowing McCreadie to take the lead. Marlar immediately responded the next lap with a picture-perfect line through turn 2 to retake the lead for good.

Both Marlar and McCreadie, however, benefitted from the misfortunes of Tyler Erb. Erb, who won both preliminary features on Thursday and Friday, led 29 laps before coming up limp on lap 40 with a broken rear end. The team was able to repair the car and Erb battled back to score a top-five finish.

Brandon Overton’s decision to put extreme pressure on polesitter Stormy Scott from the drop of the green flag proved to be the correct call Saturday night, as Overton taking the lead put him in prime position when the Texas Dirt Track rubbered up halfway through the feature. With the low line rubbered to a point no driver could move off of it, Overton simply had to hit his marks to score the $50,000 win, his fourth win of a half-century or more this summer alone.

The inaugural event (which was confirmed during the RaceXR+ broadcast as being brought back for 2022) drew a healthy collection of late models from the World of Outlaws tour, which was on an off-weekend.

Yes, Stewart Friesen ended up benefitting from having his tire cut down from contact with a lapped car, but that doesn’t change the fact that he a) carved through lapped traffic masterfully through the entire second segment at Fonda, and b) that he did it despite putting 30-plus more laps on his tires than most of his competitors. Already owner of double-digit feature wins at Fonda in 2021, his Saturday night triumph was well-deserved.

For Mike Marlar and his team to come out of protocols only to contend for a World 100 trophy, then win a Knoxville trophy, is damn impressive. It wasn’t perfect, as Marlar screwed himself up in handing the lead to McCreadie on lap 90, but all the credit in the world to the driver of the No. 157 for sticking with his line on the very next lap, taking the lead back with authority from the likely LOLMDS champion.

Speaking of Tim McCreadie, his 2021 campaign may not be dominant in terms of win total, but his points racing this year has come on the back of top-five finishes, not top 10s. McCreadie’s performance on Saturday was yet another reminder of just how much of a force the No. 39 team currently is.

Earl Pearson Jr.’s performance at Knoxville Saturday was vintage, and spoke volumes as to what his move to running cars for Jason Papich could do for his results. Capitalizing on a test session at 300 Raceway in Iowa earlier in the week, Pearson’s No. 46 car ran in the top five for the entirety of Saturday’s feature in his debut with his new team after leaving Black Diamond Motorsports.

Trying to run down Friesen at Fonda in 2021 has been a fool’s errand, but Rocky Warner did as well as any other driver has. Had the caution not flown on lap 191, Friesen would have had to make some very tough calls in lapped traffic to keep him at bay.

Devin Moran lost two spots on the final lap at Texas Saturday, but all the credit in the world to him for giving up a sure second-place finish to try and challenge Overton for the race win. It proved as ill-fated as Carl Edwards’ banzai at Kansas years ago, given how much rubber the low groove of the track had taken, but it was a pure example of racing for the win, to hell with the results. Good on Moran for taking the chance.

On the one hand, Tyler Erb was the fastest driver in Knoxville this weekend, winning two preliminary features and finishing in the top five in Saturday’s A-main. Having said that…

Erb’s rear-end failure 40 laps in Saturday cost the No. 1 team tens of thousands of dollars in winnings, as well as a crown-jewel win. Erb has had a strong 2021 (he actually leads the LOLMDS in wins) but this loss will sting.

It was a bad weekend for the current runner-ups on the national late model tours. Chris Madden wasn’t racing for WoO points at Texas this weekend, but being involved in two wrecks on consecutive nights at Texas (Saturday’s incident flipped his No. 44 car over) isn’t going to do his team any favors as they try to rebound from missed opportunities on their home turf in the South in recent weeks.

It wasn’t as dramatic as Madden, but LOLMDS runner-up Jonathan Davenport likely saw any shot he had at a fourth series title come to an end on Saturday, when he was forced to retire less than 25 laps into the Knoxville feature with an overheating engine. Davenport finished 24 spots behind McCreadie in the final running order.

Davenport is going to his pit for the night. Having motor issues pic.twitter.com/GtgcjoDUzG

Madden wasn’t the only driver to endure hard crashes this weekend. Middlesex, N.Y.’s Alan Johnson took a vicious hit after colliding with a stopped Josh Hohenforst in turn 3, a wreck that visibly crushed the passenger side of his car in by more than a foot. And Sheffield, Ill.’s Rich Bell endured a nasty head-first crash into the turn 2 wall at Knoxville after clipping the inside berm and folding his nose under his left-front tire, leaving his car unable to turn.

Lastly, arguably the most visually impressive incident of the night goes to Saratoga Springs, N.Y.’s Michael Ballestero, who lost an entire wheel on the opening lap of Saturday’s 602 sportsman feature at Fonda. The impressive part? Despite losing the wheel on the frontstretch, the wheel managed to complete turns 1 and 2 on its own before being corralled by a track official.

There’s no getting around it, the track surface for Saturday’s super late model finale at Texas was not worthy of a $50,000 feature.

50k to win late model race and it’s only 30 laps and it already rubbered before halfway. Lol.

Having said that, I’m going to give the crew at the Texas Dirt Track the benefit of the doubt on this one, because having watched almost every single Monday night show the track has contested in 2021, a rubbered-up track is the exception, not the rule at this facility. Of course, it may help if next year’s final night of the Nationals doesn’t have half-a-dozen features scheduled on it too.

I’ve said it before in this space, and I’ll say it again. Scheduled intermissions in long-distance races completely undermine the point of having long-distance races. It’s not a 200-lap event if 100 laps in cars can be fully adjusted by entire crews while drivers can climb out of their cars, eyeball their tires and take on food and fluids. Either run twin 100s or cut the feature to however long the cars can make it on fuel and hard tires.

In that same vein, it was encouraging to see the LOLMDS race at Knoxville rely on a natural caution for their fueling break as opposed to a scheduled caution like what was used at Fonda, but the reality is neither feature benefitted from their intermissions. The fueling break at Knoxville led to essentially 15 minutes of dead air after a dramatic exchange saw a dominant Tyler Erb fall from the lead due to mechanical failure. Meanwhile at Fonda, an exchange of green-flag racing that had three cars under a blanket for the race lead at the end of the first segment gave way to 100 laps of Stewart Friesen up front. Good things happen when races are uninterrupted.

Yes, DirtVision costs a lot more, but there’s a lot more races on it too. Twitter has a point here.

You know who did the @knoxvilleraces Knoxville Nationals fuel stop coverage better than @MAVTV? @dirtvision that’s who. We got updates, tidbits & news from the sprint guys during the break. MAV gives us this. pic.twitter.com/wGG5y33Aqe

Maybe it’s because the caution flag that flew on lap 116 didn’t prevent the violent incident between Johnson and Hohenforst, but it seemed absolutely absurd to me that the caution flew on lap 186 of the Fonda 200 when Ronnie Johnson was off the pace. Off the pace, yes. But considering Johnson was moving at some form of speed and in position to make the pit exit comfortably, the call was questionable at best.

Speaking purely as a race fan, I hope that the promoters of big-time center-drive modified and super late model racing can cooperate a little better in 2022. Having twin $50,000 super late model features on the same weekend did neither field of cars any favors; a Knoxville race in the Midwest without the Moran clan or Hell Tour champion Bobby Pierce felt like something was missing, while Brandon Overton not having Davenport and the rest of the LOLMDS field to race against made this the most underwhelming of his major-dollar wins in 2021.

I did not stay up this late to watch a train ? around the bottom of this race track. ? #TexasDirt

And as for the center-drives up north, neither the Short Track Super Series nor the Super DIRTcar Series did themselves any favors by running big-money features that saw Matt Sheppard and Stewart Friesen not racing against each other. Yes, racing is a business, and promoters will always be in competition with each other. There’s still no reason the schedule this weekend should have been this congested.

3 – starts it took to score a lap in Saturday’s 602 sportsman feature at Fonda.

48 – super late models entered at Knoxville over the race weekend.

Where it Rated (on a scale of one to six cans with one a stinker and a six-pack an instant classic): We’ll give the weekend three-and-a-half lukewarm beers at Dingus in Knoxville. Marlar and McCreadie did some good stuff on the sprint cars’ hallowed ground, but Friesen’s dominance at the front at Fonda and a parade at Texas were both disappointments.

Up Next: With the annual State Championship race at East Alabama Motor Speedway postponed this weekend, the pickings for the coming midweek get a bit slim. Sunday night will see the season championship races at Buffalo River Speedway in Minnesota streamed, with micro sprint action returning to Millbridge Speedway on Wednesday. Coverage will be available on Dirt Race Central and DirtVision, respectively.