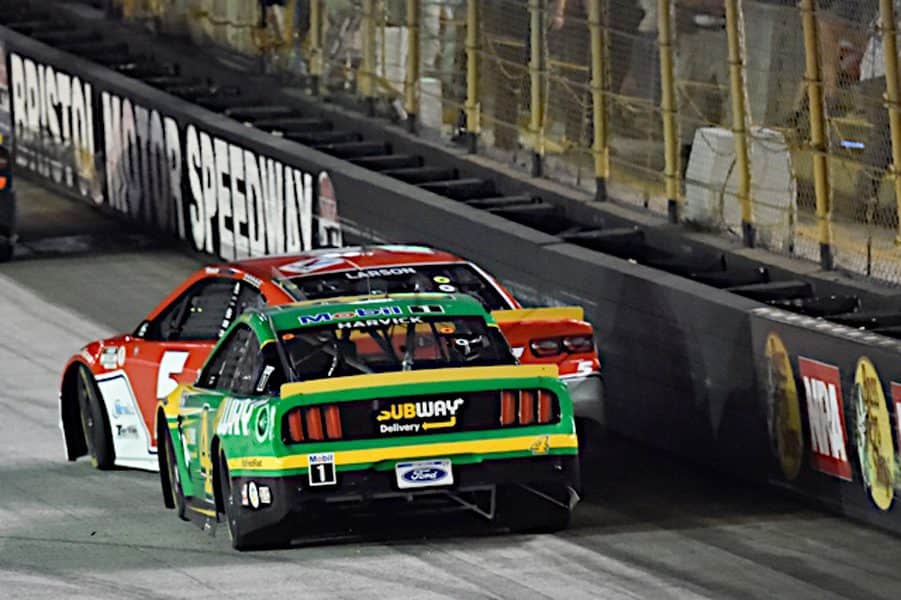 Bristol Motor Speedway is an interesting place. Hard racing, wrecking, loud noises and shenanigans showcased this weekend on NBCSN come to mind every time it’s mentioned. I have no doubt that you can think of more.

Saturday night’s Bass Pro Shops NRA Night Race was something else. Fans of The Athletic’s Jeff Gluck have voted it as the best race of the past few years. Bristol Motor Speedway sent a press release out to promote that fact. Do I think it’s the case? I’m really not sure, but there’s no doubt it was an interesting event.

We’ll start with the last 100 laps or so. I honestly cannot recall a time in which so many potential contenders were taken out of a chance to win by cut tires due to contact. First, it was Denny Hamlin, then Kyle Busch, Chase Elliott and Christopher Bell. I’m not used to that.

NBCSN (NBC Sports Network) did a decent job in showing what happened to Hamlin and Elliott. Hamlin’s incident actually caused the race’s final caution, while Elliott was going for the lead when his failure happened. The Busch and Bell failures didn’t get as much coverage. Bell was running seventh when he cut his tire. It pitched him into the wall, then into Josh Bilicki.

Admittedly, Bell’s green-flag stop was a complete mess. NBCSN caught that live and I have no idea what to say about it. It’s the type of stuff that might give Bell a nightmare.

Then, we have the post-race content. Oh boy. Needless to say, Elliott and Kevin Harvick weren’t happy with each other. Elliott was mad because of the contact that cut his tire, causing Harvick’s frustration because Elliott, after that unscheduled stop, was trying to be the Bandit to Kyle Larson’s Snowman. Naturally, much of the discussion since the race has centered on the confrontation. NASCAR posted this clip that rehashes the final laps and the pit road altercation afterward.

A couple of notes here. One, from the NBCSN broadcast, I was under the opinion that it was a member of Larson’s crew holding Harvick back at first. Turns out that it was a member of Elliott’s crew. Harvick’s business manager, Josh Jones (in the white shirt), was also trying to break things up. On the linked video, he exchanged further words with Elliott’s crew members.

Later on, NBCSN caught footage of a second argument between the two drivers behind the wall. Jordan Bianchi from The Athletic was there videoing the confrontation.

Chase Elliott and Kevin Harvick had a second chat after their initial encounter on pit road. pic.twitter.com/edriKwbjed

Of note, Bianchi actually appears in the first video as well. He was right there on pit road for the initial heated discussion.

Harvick saw him and apparently told him to stop shooting video (that portion is not in the video above, but made it onto the NBCSN broadcast). Bianchi stopped … for about a second before starting it back up again. Then, some burly guy in a black shirt with a VIP pass stepped in to block him. Eventually, Harvick and Elliott went to Elliott’s transporter to further discuss the situation in private. They both then left the track without further comment.

I’d say NBCSN pretty much had this situation covered. The only way they could have done more is if they had a camera inside of Elliott’s hauler.

Obviously, NBCSN was hoping for dukes to be put up for fisticuffs. That did not happen. I’m happy that it didn’t. I approach fighting in racing a lot differently than most fans. I’m all for drivers showing their personalities and so forth, but why embarrass yourself and your entire family on national television? It just makes you look immature that you can’t settle your problems without putting ’em up. Harvick did cuss multiple times during his NBCSN interview, which he was technically required to do on air after winding up second. If he hadn’t finished runner-up, that interview wouldn’t have happened.

Outside of the argument, the main topic of discussion for the evening was points. The first two races of the round were refreshingly bereft of that discussion as the race itself took center stage. Not so much Saturday night. It was everywhere, and extremely intrusive at times.

The only benefit of this change is that you saw a lot more double-boxing of battles during the event. There seemed to be a lot more racing for position than normal involving the playoff contenders. Since every position is important, they showed those battles.

However, the side-by-side action had to involve playoff contenders to make the cut. If it didn’t, the battles almost never got shown.

Post-race coverage was obviously dominated by the Harvick-Elliott argument and its fallout. In addition to that analysis, viewers got a number of post-race interviews with drivers excited to move on and others who were dejected. There was no real coverage of anyone that wasn’t in the playoffs.

As you can tell, I’m not really a fan of the all-or-nothing approach to playoff coverage. There has to be a happy medium. Remember, TV is extremely important to the teams in the series. Especially these days, TV is one of the primary ways sponsors can showcase their activation. With the ongoing pandemic, it’s that much harder to reach people.

Overall, Saturday night turned into a very competitive race, showcased well by NBCSN. It might have been light on crashing (everyone predicted 10+ cautions for the race, but the eight that actually flew were more than I thought would occur). Regardless, there was plenty of on-track action to be had. NBCSN had a hard time picking and choosing what would be best to cover because there was a lot to choose from. For the most part, they chose well.

This event was probably the best race at Bristol since the PJ1 TrackBite was introduced to the facility. However, it’s really hard to get it right there. The amount of on-track activity, along with precipitation, can affect how long it lasts, turning the whole affair into a toss-up for the drivers and for TV.  In the future, with the Next Gen car, I hope it won’t be necessary.

That’s all for this week. Next weekend is a tripleheader for NASCAR at Las Vegas Motor Speedway. Expect it to be hot because it almost always is this time of year out in southern Nevada. INDYCAR has its season finale on the Streets of Long Beach with the IMSA WeatherTech SportsCar Championship joining them. Formula 1 will be at the Sochi Autodrome for what will be the second-to-last visit at the track (the race will move to Igora Drive, near St. Petersburg, in 2023).

TV listings for the upcoming week in motorsports can be found here.

I will provide critiques of the Cup and Xfinity broadcasts from Las Vegas in next week’s edition of Couch Potato Tuesday here at Frontstretch. For the Critic’s Annex, run in our free Newsletter, you’ll get multiple editions this week. One will cover Thursday night’s UNOH 200 presented by Ohio Logistics. The other will cover the wild Food City 300.

Talladega Superspeedway weekend is probably going to be much trickier as I plan to be at the track for Frontstretch for my only NASCAR weekend of the year. The current plan involves taking a look at the new documentary, Schumacher, that just came out last Wednesday on Netflix.

The broadcasts always seem better when the racing is good. This was easily the best NASCAR racing weekend of the year.

I am with you on the fighting. Then the overgrown underachievers (Hendrick Crew Members) try to flex their muscles. What a joke.
Someone did point out old Brad K should have pushed Kevin into him AKA the Texas aftermath.
Anyway, I have more of an ethical question regarding Marty Snyder and NBC.
I believe old nazled Marty’s wife is in marketing for Richard Childress Racing. THAT FACT SHOULD BE DISCLOSED before every broadcast. He kept us well informed about Tyler Reddick’s progress at the expense of others.
If NBC had any ethics, they would not let him cover any RCR cars or mention them in the broadcast. That is free advertisement and helps his wife’s cause.
Ethically wrong.
Please investigate this little tidbit.

And still the ratings were abysmal. Doesnt seem to be, and I suppose there shouldn’t be, any relationship between the two. Regardless the trend isn’t upward.