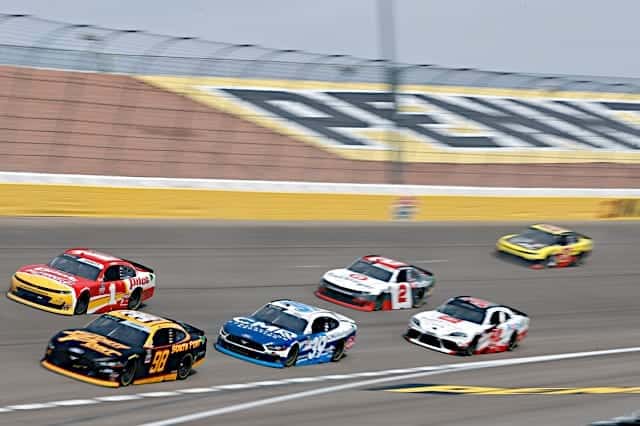 The NASCAR Xfinity Series playoffs are set to kick off at Las Vegas Motor Speedway on Sept. 25 with the running of the Alsco Uniforms 302.

Forty-one cars are entered for 40 spots. Due to owner points, Timmy Hill and the No. 13 MBM Motorsports Toyota won’t compete in the race.

Among the notable drivers is Josh Berry, who will substitute for Michael Annett in the No. 1 Pilot/Flying J Chevrolet. It will be Berry’s 15th start for JRM and his fourth fill-in for Annett.

Bayley Currey will appear in the No. 15 Chevrolet for JD Motorsports with Gary Keller for the second time this season. Currey has made 18 starts between JDM and Mike Harmon Racing in 2021.

Dylan Lupton is set to make his first NXS start since 2018 for Sam Hunt Racing. Lupton will drive the No. 26 Marques General Engineering Toyota.

Blaine Perkins will make his sixth appearance of the year for Our Motorsports in the No. 23 Chevrolet. The Alsco Uniforms 302 is his first career NXS race at LVMS, although he’s raced on the smaller bullring in the ARCA Menards West Series.

Ty Dillon is driving for Jordan Anderson Racing in the No. 31 South Point Hotel & Casino Chevrolet. It’s his 10th NXS start of 2021 with his fourth different car.

Carson Ware will make his sixth start of 2021 and his first in the the No. 52 Chevrolet for Means Motorsports.

Matt Jaskol will pilot the No. 66 Autoparts4less.com Toyota for MBM Motorsports. It will be Jaskol’s sixth start on the 2021 campaign.

For the fourth time in 2021, CJ McLaughlin will appear in the series, driving the No. 74 SciAps Chevrolet for MHR.

Mason Massey will climb behind the wheel for the 10th time this season, running the No. 78 Gerber Collision & Glass Chevrolet for BJ McLeod Motorsports.

BJ McLeod will also appear for his BJMM in the No. 99 Chevrolet. It is McLeod’s fifth start of the season.