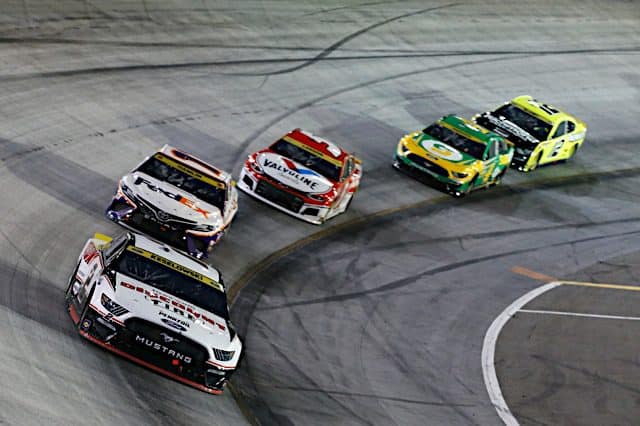 Bristol Motor Speedway has a rich history of, shall we say, drivers seeing things from a different perspective. The track marketed these dust-ups with remarkable success and became a fan favorite for the same reason crowds throughout history loved the guillotine: It was a macabre spectacle. The blade had dulled with excessive use, however, as Bristol excitement faded under the weight of track changes that lessened the number of crashes while side-by-side action looked more like a 1.5-mile intermediate at times instead of your local short track.

That is… until this weekend.

The NASCAR Xfinity Series race saw the winner towed to victory lane after contact resulted in the top two cars crossing the finish line passenger side first. Then, a late-race difference of opinion between Chase Elliott and Kevin Harvick contributed to Kyle Larson grabbing yet another victory.

For Larson, it was just another win in a season full of them. He didn’t need it to advance to the second round of the playoffs. Much of the same was true for Elliott, who has a pair of wins himself in 2021. However, the stakes were a bit higher for Harvick. The 2014 Cup Series champion has yet to earn a win this season, and Bristol was probably pretty high on his list considering how good he is there. It just wasn’t meant to be this time.

Larson claimed his sixth triumph of the 2021 season, but historically speaking, it may not be the best thing for his championship aspirations. Martin Truex Jr. is the only driver to win more than five races and the championship in a single season since the current points format came into use in 2014. Five has seemingly been the magic number, as only Truex (eight) and Joey Logano (three) earned titles in that span without exactly five wins.

Harvick has won a race every year since 2010, claiming 47 of his wins during the past 11 years. He has visited victory lane in the premier division of NASCAR at least twice per season since joining Stewart-Haas Racing in 2014. All of that is hanging in the balance during the final seven races that remain. You can bet “Happy” is hungry to keep his streaks alive.

As in most sports, the ideal time to get any kind of momentum going is just as the season winds down. Everyone wants a hot hand for crunch time, especially in NASCAR. Unfortunately for Alex Bowman, his sizzle has fizzled. The No. 48 wheelman’s fifth-place showing at Bristol was his first top five in the last eight races. Bowman will be under a lot of pressure to run well next week at Las Vegas Motor Speedway, because the other two tracks in this round, Talladega Superspeedway and the Charlotte Motor Speedway ROVAL, have not been kind to him in the past.

Bubba Wallace might have been more high profile than the King’s current driver, Erik Jones, but with Jones’ eighth-place finish at Bristol, his average finishing position of 20.2 is higher than Wallace’s was during any of his three years behind the wheel of the No. 43.

Elliott and Harvick definitely ran into trouble at Bristol. That type of occurrence is nothing new. However, what is a little unique was there really weren’t any other leaders who were victimized by the race car-demolishing concrete arena. Elliott was the only driver who led at any point during the race and didn’t finish in the top 10. If not for a cut tire, he likely would have finished there considering that he led 129 laps, more than a quarter of the event.

The lead in Saturday night’s race changed hands 23 times, which marked the 25th consecutive race at Bristol with a double-digit number of lead changes. The streak is the longest ever for any Cup Series short track, and the longest active one outside of Talladega, which has never had a Cup race run with fewer than 12 lead changes.

The banner year for Kaulig Racing continued Friday night (Sept. 17) as AJ Allmendinger wrapped up the regular season Xfinity Series championship for 2021. His wildly unconventional victory was his fourth of the year in that series, a career high for Allmendinger. Don’t forget, he has a win and three top-10 finishes in only four Cup Series starts for Kaulig as well.

Kaulig Racing is one of the best stories of the current season. I really hope Dinger wins the Xfinity championship. His enthusiasm and positivity is contagious and that’s why he’s become such a fan favorite.

Kaulig might become the next Hendrick. AJ is doing well, I always knew he could drive but his drum is HIS own, not money.

Wow…harsh! You must have never met a real “thug”! Chase doesn’t fit the description…spoiled, entitled…closer.