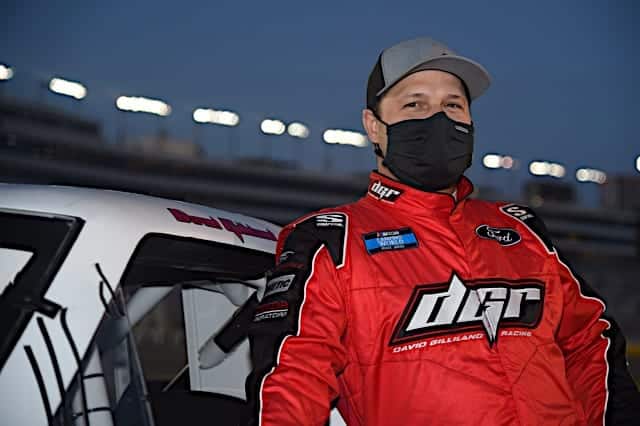 Gilliland performed non-compliant activities on pit road, according to ARCA, and violated Section 12-8.1 of the rulebook. He has been fined $1,500 and suspended for next weekend’s ARCA Menards Series race at Salem Speedway. He will also be placed on probation for the rest of the season.

ARCA did not release what specific activity Gilliland performed that resulted in his suspension.

The two drivers have had an ongoing rivalry throughout the 2021 season that has seen multiple incidents occur between the two at ARCA events.

Thanks so much for that detailed report!!!!

Echo
Reply to  A Different Steve

What kind of reporter can’t find out- the rest of the story !!!

No kidding! Looks like body hight requirements per the section of the 2021 ARCA rulebook. Why infer and show a Twitter post of the Moffitt/ Dollar incident. Read the rules if you’re a reporter man!

I do want to update my comment. In this article the author states rule 12 8.1 of the ARCA “rulebook”. Another article I read said it was violation of the same rule but in the “Member Conduct Guidelines” so that would rule out anything wrong with the car. This rule states that a member can be fined for “A Heat of the moment” actions which, indeed could be the shouting match between Dollar and Moffit had on pit road after the Bristol race. I still stand by the fact that the reporting could have been better by statng from which ARCA rulebook the fine came from. Being a hard core NASCAR fan since I could turn on a TV and am now 58 retired IT professional in NorCal. Have been to every race at Sears Point since NorCal was lucky enough to get a cup race. It is tradition we make a weekend of it and the highlight was seeing my favorite driver for eternity win The one and only Intimidator won at the the road coarse in 95. As a hardcore fan I just expect high level of clarity on a story that alludes the penalty may be between on/off track conduct of drivers which in this case may be. Unfortunately, the author was not very clear on the point only that ARCA is unwilling to say exactly what it was but by simply pulling up the conduct guidelines from what I found it looks plausible. But we are all human and I could be wrong. But I’ve done my due diligence as a fan to find out as much as possible.

WHEN THEY QUIT THE EVERY 100 LAP OR SO POWER YOUR NOSE PIT STOP AND DRIVERS BUTT . AND RACE LIKE IT USED TO .AND THAT WAS CALLED RACING. THE STOP THEY MAKE NOW THAT’S WHY MOST OF THE PEOPLE DON’T WATCH!!! THIS IS POWER YOUR BUT RACING. AND THAT’S WHY SO CALL NASCAR IS NOT DOING SO WELL AND THE PEACE OF JUNK NEXT GENERATION CAR IS ALSO CRAP JUST ASK MOST OF THE DRIVERS THEY HAVE NO INPUT. SAD THEY LEFT THE PEOPLE WHO HAVE SUPPORTED. THEM FOR YEARS AND THEY LEFT US BEHIND AND NOW THEIR NOT DOING SO WELL !! AND WELL MOST DON’T WATCH POWER PUFF RACING.

Completely agree on the crap of the next gen car. What the Hell are they going to do with all the fabricators? I thought NASCAR was about innovation, not making a IROC series with composite bodies that are nearly indestructible. It is only going to make more video game type moves like Larson made on Saturday common place and take away the threat of pushing in a wheel well = cut down tire, or crush panel = roasting like a steak in your car. Just ride the rim like Larson said “video game it” last I checked real cup racing was no joke, or video game I like Larson he hails about 40 miles from me and have seen him race plenty of dirt when he actually lived in NorCal, dude is gushing with talent. The Next Gen is going to be a burning trash heap and make the COT look like a good car. Plus GD it! I HATE that number placement, just call me old school!!!!

That is a horrible job reporting. Thanks for nothing.

Is David on double secret probation?