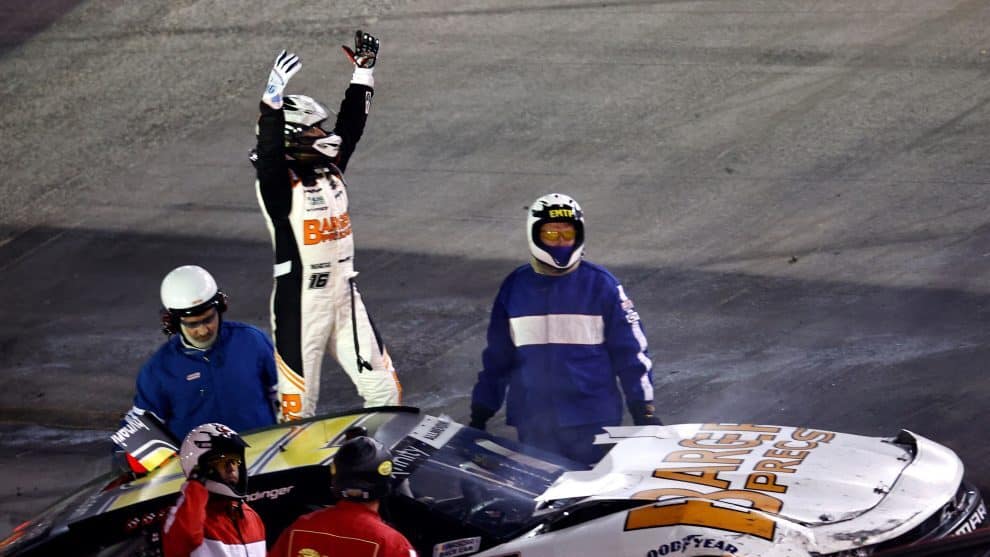 AJ Allmendinger did not have the best car.

On Friday night (Sept. 17) at Bristol Motor Speedway, the 39-year-old estimates he had at best a fourth-place Kaulig Racing machine.

He didn’t lead a single lap around the half-mile track during regulation of the NASCAR Xfinity Series’ regular-season finale.

Over the final two laps, the former full-time NASCAR Cup Series driver did everything and then some to take the checkered flag first. He did just that, sliding across the finish line sideways with Austin Cindric, contact which incited a crash entering Turn 1.

ARE YOU KIDDING ME!?@AJDinger crashes, and wins anyway at @BMSUpdates! The win makes him the @NASCAR_Xfinity regular season CHAMPION! pic.twitter.com/BEYxVHfgcg

Allmendinger had to visit the infield care center, but he was compensated with his fourth series win of the year, the regular-season championship, 15 playoff points and a badass sword as a trophy.

Not bad for a guy who spent most of his Cup career labeled as a road course ringer.

“All I can look at is that I got nothing to lose,” Allmendinger said Tuesday (Sept. 21) during the Xfinity Series’ playoff media day. “It’s one of those things that it’s late in my career, I didn’t expect this. And as we saw coming to the checkered at Bristol, I’m willing to do whatever it takes: put my body on the line, risk making a pass, whatever [I have] to do to go win this championship because I got nothing to lose. I’m loving this.”

Cindric, who was Allmendinger’s main competition for the regular-season title right up to the race’s end, got the message.

“I think it certainly confirmed some things for me as far as the length in which he would go to in certain racing situations,” the Team Penske driver said.

Three years ago, Allmendinger was “burnt out.”

There’s not a much better way to sum up how one feels after 11 years, 371 starts and only one win in the Cup Series and an unceremonious departure from JTG Daugherty Racing after six seasons (five full-time) driving for the team.

A few years into its existence in the Xfinity Series, Rice said it was time for Kaulig Racing to “step up or step out.”

The team was winless after stints with Blake Koch and Ryan Truex over the previous three seasons.

“I knew he was high-intensity,” Rice told Frontstretch. “He had just come off of a devastating couple of years running at JTG. And, you know, having expectations that he has and not doing as well as he wanted to do. So I thought, ‘Well, maybe he’ll give Xfinity a shot.’

“So in my mind, I had this plan. We run on a third Xfinity [car] at the speedways. And then we will run him at all the road courses to make our road course racing better. So I called him up, told him what my my vision was … he bought into it.”

See also
Nutrien AG Will Not Sponsor Kaulig Racing in 2022

In the two years since Allmendinger made his debut with the team, in the summer race at Daytona International Speedway, Kaulig Racing has reeled off 14 wins, including Allmendinger’s victory in the inaugural Cup race on the Indianapolis Motor Speedway road course earlier this season.

Kaulig will make the full-time jump to Cup racing in 2022 with two cars. Justin Haley will drive one car full-time. The plans for the second car will be announced in the next couple of weeks.

“He never had anybody in NASCAR just sit down and say, ‘Hey, man, make us better. Help us be better, help us be winners,'” Rice said. “We might have won at Daytona (in 2019 with Ross Chastain) but we didn’t know how to win. … He’s helped me, he’s helped this entire race team. He’s also helped Justin (Haley), he’s helped Jeb (Burton). […] So I give him a ton of credit of helping us win races and learn how to win races.”

On the flip side, his new family at Kaulig Racing has provided Allmendinger with a new lease on his racing life. It’s come in an atmosphere where the native of San Jose, Calif., can be himself.

Well, to a point.

“(Rice) sat me down right away and said, ‘Man, I don’t want you to stress yourself out here. I want you to make us better. And don’t lose that edge that you ever have, that intensity, but it’s different here.’ … So that’s the way they’ve changed me in that sense,” Allmendinger said. “Like my intensity levels we’ve seen and you hear on the radio, or even some of my interviews, that’s never gonna change. When I’m in the racecar, it’s all about winning.

“But I think what’s a bigger deal is once we leave the racetrack, it’s gone. Or even after a race, they let me be frustrated. And then finally, (team owner) Matt (Kaulig) and Chris are like, ‘OK, we’re done, let it go, let’s go have a good time,’ whether we’re going to dinner or we’re going to go play golf or whatever it may be. So I think they’ve really taught me and at least allowed me to be me.”

It’s also provided Allmendinger the chance to experience his full potential in a way he hasn’t since 2006, when he won five Champ Car races before making the jump to NASCAR.

For Cindric, the defending Xfinity Series champion, racing against a driver of Allmendinger’s “caliber” for a full year “raises your standards.”

“Whether that’s how you approach a race weekend or the lengths you’ll go in a race to strive for perfection and being fast, I think it’s great to be surrounded by people like that.” Cindric said. “I think that’s why it’s great to have Cup drivers come race against us.  It’s like when you put the regular person in with the Olympians, and they go run the 100-meter dash. That would never happen, but I think it’s always great to get a little perspective.”

Cindric and Allmendinger talked after their Bristol showdown.

Their conversation helped Cindric “understand” where Allmendinger’s “coming from.”

“I think there’s something to be said for where he’s at in his life and his career and how motivated he still is,” Cindric explained. “I think for anyone that knows him, that’s not much of a surprise, but I think he’s hungry as ever and he doesn’t care what anyone else thinks, and I think that’s fun.”

We’ll see if Cindric is still calling it “fun” after the seven-race playoff ends in November at Phoenix Raceway.

“I don’t know what Team Penske feels and how they’re thinking over there,” Allmendinger said. “But [Bristol] definitely shows everybody in the series that even on a day that maybe we don’t win, if you give us a glimmer of hope, we’re gonna take that shot at it, and we can make it happen.”

I’ve watched AJ from when he first came into Indy cars. Watched him struggle, & finally figure it out. Seen him win the 24 Hours of Daytona, when he was the go to driver for the final stint. Seen him lose the best ride he’ll probably ever have. In short I’ve admired him through the career highs, & lows. And I love what I’m seeing now. As for showing Kaulig how to win, he’s already shown them how to win in Cup. I only hope he get’s the chance to do it full time in Cup next year.

The exact attitude AJ needs to take the rest of the year. I too have always liked AJ. I’d love to see more drivers ” just go for it ” and leave nothing on the table. I started liking Keselowski when he just went for it at Dega against Edwards. I know that Larson will just go for it in cups final race if given the chance. There are a few more in cup that will do the same. That’s why they’re there just go for it.