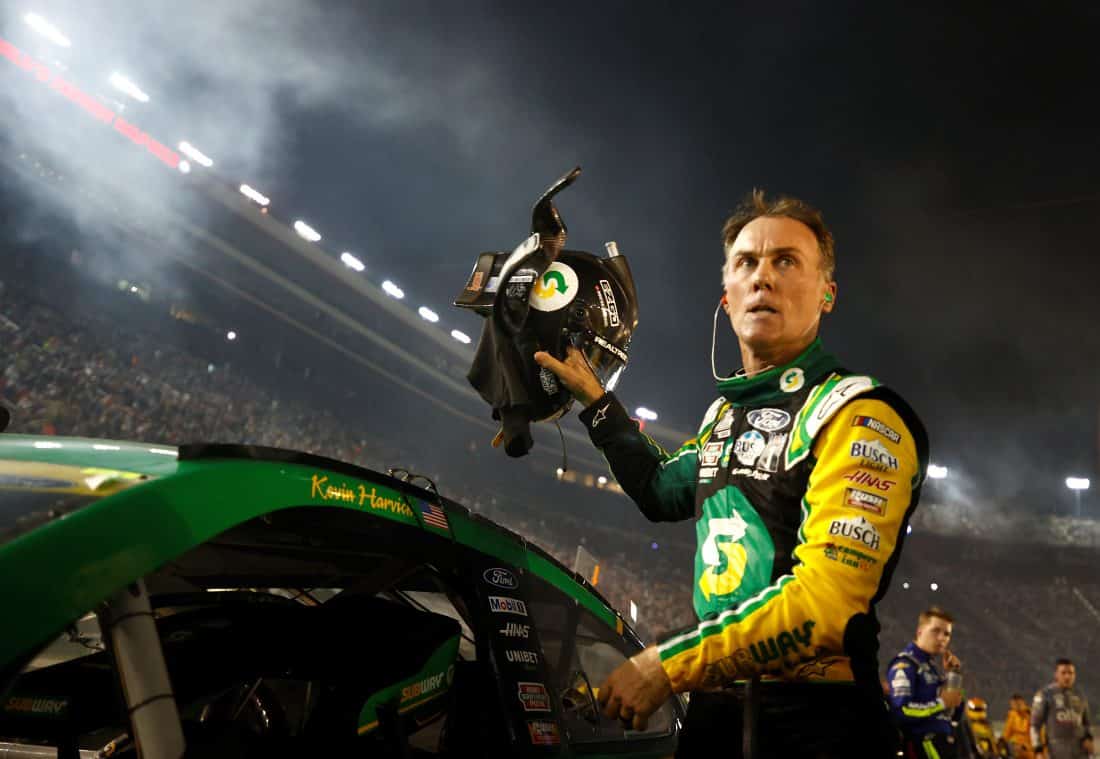 This has officially become the stupidest argument of all time.

Who the hell cares whether or not a driver takes their helmet off during a confrontation? Don’t give me the “he’s not man enough to show his face” or “well, Chase took his off” card. Ever think that a driver may be in a fit of rage and the first thing on their mind isn’t to take their helmet off?

Maybe instead their mind is stuck on “ripping (his) freaking head off” as Harvick said about Elliott and not “oh, let me unbuckle my HANS device real quick before I go outside and talk to him. Since national television is going to get it, I better look the part.”

Get outta here with that. Don’t you want drivers to show emotion? Be passionate? Show that it all does matter? Don’t sit here and nitpick about so and so not taking their helmet off to “fight” when there wasn’t an actual fight.

These were two champions, albeit 20 years apart in age, having intense discourse about a disagreement that happened on track both individuals feel cost them the win. So excuse Mr. Harvick if he didn’t take his helmet off right away.

Now, if this altercation was in the garage area or by the haulers (where they talked again, by the way), that’d be something different. This convo was before any of their team members, media members or NASCAR officials could even get to them.

Literally right as Harvick got out of the car, he and Elliott went to talk. Don’t quibble with one driver not taking their helmet off because it’s “not old school” or “weak.” That argument is weak, and thus ends my impromptu rant.

See also
5 Points to Ponder: Sorry We Took You for Granted, Bristol

I’m with you, Josiah. Who says no?

So are we just assuming Nascar/ISC would just give up their title race and give it to SMI.. Na. $$,$$$,$$$. Also, we have to consider the surrounding town and accommodations available. Nice thought and what if’s.. but just won’t ever happen.

NASCAR has increasingly been progressive in their moves, so never say never to International Speedway Corp., which is owned by NASCAR, giving up a date voluntarily to competitor Speedway Motorsports Inc. for the championship race. The idea of the finale being rotated has been a long-debated topic, and what better place for it to happen than at Bristol Motor Speedway, baby?

But Hamlin raises a couple fair points. Besides the ISC/Speedway Motorsports one, what about the town of Bristol, Tenn./Va., itself? Sure, it’s no metropolis like Miami, Phoenix, Los Angeles, etc., but it’s not a dump, either. Heck, the track held 200,000+ people for a football game with more logistical strain than (probably) ever. Who’s to say they can’t do it again for a race, something they’ve been doing for decades?

The weather also is a question mark. Unless NASCAR were to drastically shift the schedule to end earlier in the year (which I’m highly in favor of, by the way), November in Tennessee is a bit chilly and unpredictable.

Not sure if NASCAR would necessarily love the idea of a snowed-out race postponed to Monday or the championship race with all the pomp, circumstance and festivities that come along with it being held in a climate that feels like winter.

All that being said … how damn cool would it be if Bristol actually did host the title race? That place would (theoretically) be sold out like the good ol’ days, beating and banging would take on a whole new meaning and 15-second laps would feel like five with a championship trophy on the line.

It’s not impossible, but it’s not probable either. Realistically speaking, I’d be surprised and borderline shocked if Bristol got the title race, mostly because of the ISC/Speedway Motorsports issue. But…I didn’t expect the Cup Series to be racing at the Los Angeles Coliseum, either.

It has nothing to do about national TV and “looking the part” and and everything about integrity and honor.

You instantly knew nothing would come of it because he left his helmet on. Cuz only a truly coward driver would swing at another when he has a helmet on and the other doesn’t.

When a batter charges the mound should he leave his helmet on and charge with his bat too?

They always look like the weaker of the two when they leave their helmet on. It made Chase look like he was willing to get swung at. Kevin looked like he was worried about getting hit.

Insulting Harvick? He could make mince-meat of that pretty spoon boy Elliott, he simply showed his maturity and tried to talk it out like real racers use to do ala Mark Martin, etc. If he wanted to take a punch he would have done what he did to Carl Edwards the horse mouth at Charlotte around 2010ish. If you seem to forget, this is the same Harvick that jumped a car to get to Greg Biffle and almost came to blows with the Rooster himself, AND took the high road making shirts about “wearing the firesuit” and donated it to charity. So I think that you should learn the edicate of NASCAR instead of promoting needless violence.

I don,t have problem with Kevin Harvik. However I have a problem with the word he used on live tv. Nascar never said a word about it.

Tom B
Reply to  Paul

I agree, I turned off my TV and asked the Lord to forgive Kevin. Then I sat there flustered and wondered how am I going to make it through the night after hearing such language.

Everyone has their own POV, depending on their feelings about the drivers when an incident occurs. I have two overriding incidents in my memory bank concerning Harvick. one was when he interjected himself into a disagreement between Keslowsky & Gordon by shoving Brad into Jeff from behind, to start the fight. The second was last season when he realized that he wasn’t going to be able to pass Kyle Busch to make it into the championship round. So he just rammed & wrecked him at full speed from behind. Neither of these reflect very well on him in MHO. In this case, I’m not a big fan of either one of them. So I’m not taking sides on this “Bristol moment.”

You left out the time Harvick had a problem with his car at the end of the race at Talladega and he had a choice on a GWC restart, not make the next round or wreck the field on the restart. He chose the latter which tells you exactly what type of person he is. What a poor sportsman and all around dick.

Describes Harvick perfectly. He has never been a good person, even with his fake smile.

The English version is wanker. Harsh but true.

I looked it up, perfect fit.

Negative. 100% correct. The in-car camera proved he turned right to spin the car in front of him on the restart to intentionally cause a caution. Harvick’s engine was blowing up so he caused a caution on the last restart so the race would finish in OT, ensuring he would finish on the lead lap and just barely have enough points to get by to the next round. Typical douchebag KH move.

How about when he swung at Kyle Busch while he was still buckled up in his race car? Oh right, that’s OK because it was KB!

Yeah, I wanna see passion and emotion. Can’t see it with the helmet on.

Sure you can Elliott lover.

Sounds like most people are just disappointed that they didn’t get to see a fight.

Nah. Harvick should have taken his helmet off. Having a fit and throwing your gloves and slamming your helmet on your car’s roof isn’t the kind of “passion” I’m interested in seeing. Anyone can impotently throw stuff around.
If you’re going to talk big about “ripping someone’s head off” them you need to back it up and Harvick showed he’s all bark once he’s out of his racecar.

I think you’re spot on. Harvick’s the one who threw the tantrum, and it was AFTER he went back to his car. I’m not necessarily a Chase Elliot fan but he has stood up to two of the big boys and they’ve both had difficulty handling it.

No, what he showed was that he was an adult male.

Reminds me of several years ago when Gorden shoved Kenseth and he still had his helmet on.

yep, and back then EVERYONE ripped on Gordon for leaving his helmet on, too.

Bet none of you fairweather fans would stand up to Harvick’s face.