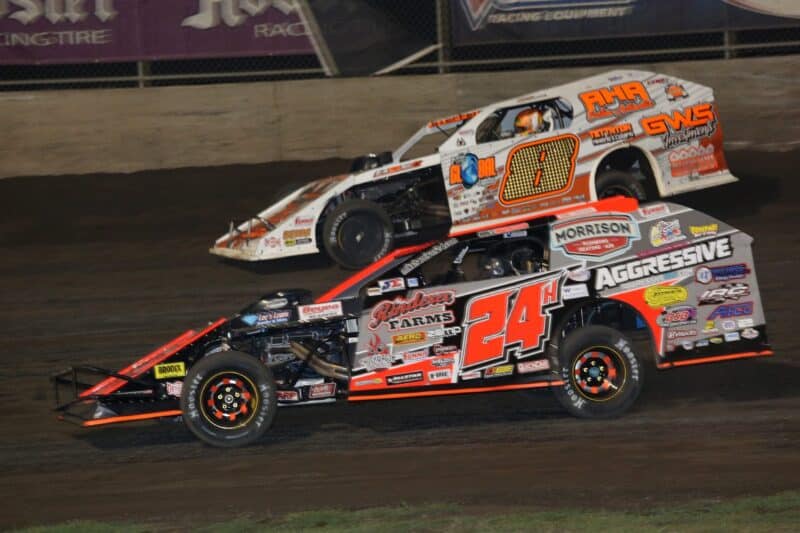 Bakersfield, Calif.’s Ethan Dotson wins the opening of round of the Race for Hope 71, IMCA modified racing’s crown jewel. Wednesday’s preliminaries at Batesville were one of a scarce few midweek race programs not rained out.

Dotson’s win came in the first of what will be three qualifying A-mains Wednesday through Friday that each will lock nine drivers into Saturday’s $50,000 Race for Hope 71 feature. Using the high side of the racetrack to perfection, Dotson blew past polesitter Jacob Hobscheidt on lap 13 of the 25-lap feature and never looked back, acing a final restart in the closing laps to preserve his win.

Ethan Dotson gets it done on night 1 in Batesville! He will roll off P1 for the 50k Race For Hope on Saturday! #vanderbuiltracecars #greshamfab

It took about 10 seconds into Sunday’s legends car feature at Buffalo River Speedway in Minnesota to realize that fourth-place starter Ty Wilke was going to take the checkers. The No. 72 was a literal rocket.

Jonesboro, Ark.’s Landon Meilke may not have made Wednesday’s A-main feature, but he won paint scheme of the race by a country mile. Super appropriate for a major race at Batesville.

Throwback car is done. We are loaded and headed to Batesville Motor Speedway for the race for hope. Can’t say thanks…

Seymour, Wis.’s Brian Mullen went from last to an A-main transfer in the fifth heat race Wednesday night at Batesville.

That midget race was won by Chase Johnson, and was a victory earned in style. Throwing a slide job shortly before the midway point of the feature, Chase’s slider was so effective that race leader Colby Johnson appeared “spooked” per the Flo Racing broadcast booth, nearly spinning out while leading. As if that slide job and keeping a WoO regular in Macedo at bay to win the midget race wasn’t enough, Chase Johnson also won Sunday night’s USAC wingless sprint car feature at Kern County.

Chase Johnson’s USAC win did not come clean. Johnson threw an early-race slider in turn 2 just as he did in the midget feature on leader Garrett Sores. Problem is, this time Johnson got out of shape trying to execute the slider, essentially parking his car in front of Sores and leading Sores to flip his machine after running over Johnson’s rear tire. Both drivers deserved credit for how they handled the aftermath; Sores strapped back into his car as soon as it was put right-side up and rebounded to finish fourth, while Johnson took full responsibility for the incident in his victory lane interview.

It may be harsh to list “Black Sunshine” Scott Bloomquist in this section, given that he won the 12th heat race Wednesday night and qualified for Saturday’s A-main in a car he seldom races. But having said that, Bloomquist was running second six laps into the feature race. Fading back six spots in the closing 19 laps of a feature is not a desirable way to run, and follows up a weekend at the Texas Dirt Nationals where Bloomquist was all but invisible in a super late model feature that included none of the Lucas Oil Late Model Dirt Series regulars.

I am not a fan at all of the qualifying night format being used for the Race for Hope 71. Running B, C and D-mains where no driver can climb the ladder to advance from the D to the C, C to the B, etc. renders a really freaking long preliminary night with a lot of points racing and only the A-main really meaning anything. If the Chili Bowl has taught one definitive lesson, more alphabet soup is always a good thing.

Gray’s Harbor Speedway in Elma, Wash. is the first that I’ve seen publicly announce a return to mask mandates for those in attendance at a dirt track.

Face coverings are required to enter this weekend 9-25-2021 per mandates.

That makes sense to me. What doesn’t is the number of supposed race fans on the track’s Facebook page commenting that they will not be attending races if they have to wear face coverings. Imagine if racecar drivers turned down rides because the car owner said they had to wear a seatbelt.

The commentary highlight of the weekend goes to the PA announcer at Buffalo River, who remarked after Luke Ryan’s incident during Sunday’s IMCA Sportmod feature that he was of no relation to Jake Ryan from the movie Sixteen Candles. Well duh, there were no Rolls-Royces in the field…

While there is nothing inaccurate in this week’s release that the annual DIRTcar Nationals at Volusia will start a day earlier than normal next season (Monday, February 7, 2022), let’s not kid ourselves that this schedule revision was made to accommodate a day of rest in the racing program. The “rest day,” Sunday, February 13, just happens to be Super Bowl Sunday.

In this week’s edition of Racetracks: An Endangered Species, we head to Ohio and the recently refurbished Jackson County Speedway. Fingers crossed that an able financier is found or that current ownership is able to grow their other businesses enough to keep the facility running.

Certainly not a post I want to make. Unfortunately with deciding factors from our recent cancellations due to covid and…

Where it Rated (on a scale of one to six cans with one a stinker and a six-pack an instant classic): This midweek gets a lukewarm Michelob Ultra, because something watery is appropriate for a stretch that saw the only super late model race and the micro sprints at Millbridge get rained out. Coupled with an underwhelming season finale at Buffalo River and an uneventful first night at Batesville, it felt like a weeknight.

Up Next: While the Lucas Oil Late Model Dirt Series has a prestigious weekend upcoming at Brownstown Speedway, the biggest-dollar events of the weekend are a bit off the radar. Saturday night will see another pair of $50,000-to-win events, the finale of the Race for Hope 71 and the Super Bee 100 for crate late models at the renamed Super Bee Speedway in Louisiana. Coverage can be found on RaceXR+ and Flo Racing, respectively.