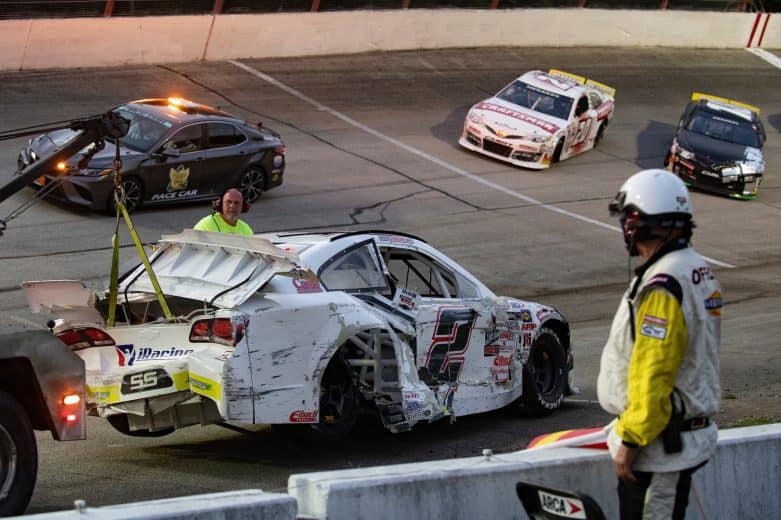 While Ty Gibbs and Corey Heim have been the class of the field this ARCA Menards Series season, there have been some shenanigans behind them, both on and off the track.

They began with preseason testing at Daytona International Speedway and reared their head in the most recent ARCA race at Bristol Motor Speedway. However, the problem is not solely that drivers, team personnel and owners have been involved. Instead, it is that ARCA series officials have not thoroughly policed those instances, thereby allowing these types of incidents to continue.

With struggling car counts and its teams having smaller budgets, ARCA does not want to fine or suspend competitors and teams because it maims them long term. Completely understandable, and in many instances, placing a driver or team on probation would suffice.

Probation serves as a warning; another transgression would necessitate either points and or financial penalty.

On-track incidents are difficult to police because without direct instruction via communications and or admission, it is challenging to know if contact was intentional. Therefore, placing a driver under probation reminds these drivers to drive their car hard without becoming overaggressive.

Before the season began, ARCA wisely placed Taylor Gray on probation after he took an in-car video of himself at the preseason test at Daytona. Not only is using your cell phone while driving against the law in many states, posting the video on social media is an admission of guilt, a definite cause for penalty.

Gray was involved in another controversial incident when he wrecked Daniel Dye, who then collected Nick Sanchez, at Winchester Speedway.

“This incident is under review by our competition folks, “ARCA Communications Manager Charlie Krall told Great Lakes Post reporter Casey Campbell. “Taylor unfortunately is on probation. We’ve monitored their social media traffic; we haven’t seen anything inflammatory so we’re going to take a look at some video and our competition folks will make a determination.”

Yet no penalties were issued. Because Gray was already under probation, he should have been penalized further. I thought ARCA should have docked Gray 20 points, or half of a full field, for this incident.

At Michigan International Speedway, Gray’s David Gilliland Racing teammate Thad Moffitt and Drew Dollar tangled. On the opening lap, Dollar washed up the track, taking Moffitt into the wall. Moffitt later got his revenge when he wrecked Dollar. Dollar spun into the wall, and with nowhere to go, Tim Richmond slammed into Dollar.

Richmond, unfortunately, suffered the worst of it all. His No. 27 was destroyed. He was also injured and has not returned to driving since.

The wrecked race cars are costly to both Richmond’s family-owned team as well as Venturini Motorsports. Richmond Clubb Motorsports team owner David Richmond estimated it was a $50,000 loss for his team.

“We normally don’t get involved in any type of penalties to drivers for actions on the racetrack, particularly after a race is over,” Krall told Campbell. “If we do penalize someone, it generally is for retaliation on the racetrack, and it’s generally done right then and there.”

I doubt Dollar intentionally took Moffitt into the wall on the opening lap, and it is uncertain whether Moffitt meant to express his displeasure with Dollar via contact or outright wreck him. Moffitt has not admitted culpability. Either way, as David Richmond told Frontstretch, “It’s kids playing high-speed bumper cars.” That should never happen.

As such, ARCA officials should place both Moffitt and Dollar on probation. It would remind them to be more cautious and hopefully end wrecking innocent drivers, Sanchez at Winchester and Richmond at Michigan.

“We want to be that first step that drivers take as they’re on their way up the ladder,” Krall told Racing News Now. “We understand there’s a lot of learning to be done here whether it’s on the racetrack or off. These drivers aren’t polished or perfect; they’re learning and we’re going to give them that kind of leeway to make those types of mistakes. Everybody would rather make those mistakes early in their career than 10 years from now when they’re running in the Cup Series. Let’s get that out of their system here.”

Yes, mistakes happen, but as drivers are beginning their racing careers in ARCA, they also should learn mistakes have consequences. Probation serves as an entry-level consequence.

An unintended consequence of probation is it places a target on that driver. Everyone else can mess with that driver, yet if that driver retaliates, it will warrant a penalty. So, ARCA officials should use the probation penalty liberally, ideally ensuring racing stays clean.

See also
4 Burning Questions: The Train Wreck That Is ARCA

ARCA officials were also dealt another situation when Jesse Love finished seventh at the Milwaukee Mile. His No. 15 failed post-race inspection, which under NASCAR rules results in disqualification. ARCA is a NASCAR-owned series, but has its own separate rules, therefore Love wasn’t DQ’ed. ARCA officials penalized Love five points as well as fined his crew chief $1,000. But if ARCA is indeed a NASCAR-owned series, a failed post-race inspection should result in a disqualification going forward.

Off the track, there have been several incidents, mostly levied with financial penalties and two suspensions.

After Moffitt wrecked him at Michigan, Dollar vandalized the David Gilliland Racing hauler. After ARCA fined him $1,000, Dollar immaturely tweeted a photo of his actions.

Frankly, Dollar’s gesture was unwarranted. Team haulers are that teams’ workspace. Someone entering it and, in this case leaving tires in it, rightly needed a penalty. That fine hopefully reminded Dollar not to do that again.

“As we said in our drivers’ meeting today, ‘Hey guys, we’re a professional racing series. This is your first step. Don’t do anything at this level that’s going to tarnish your brand, your image, your career as you’re going forward,’” Krall told Racing News Now.

Following the ARCA race at Bristol though, that statement should also be applied to team owners.

Team owner David Gilliland and Dollar engaged in a shouting match. Based on this video, Gilliland also looked like he wanted to fight Dollar.

“There was a line that was crossed,” Krall told Racing News Now. “We just want to make sure those lines are crossed as infrequently as possible.”

ARCA officials both suspended Gilliland one race and fined him $1,500. Although his words to Dollar are not publicly known, physically fighting, especially involving a team owner, is unacceptable. Therefore, ARCA’s penalty is justifiable: do not do it again.

ARCA serves as the lowest national rung on the NASCAR development ladder. Its drivers have ascended up to the national NASCAR series. Nevertheless, even on the lowest rung, violations must be aptly dealt with. Although ARCA officials have handled the off-the-track ones well, they ought to use probation to reduce on-track road rage.

Just floating this out there….but maybe the solution is not to put children that are not yet old enough to vote, drink, or rent a car in 200,000 dollar cars that go 180 mph. The cars have become too safe. The chances of injury are now low enough that fear no longer tempers the actions of youngsters. Now any irresponsible teenager with a family wallet can buy into a ride. The are, in some cases, not even able to be punched in the face for their actions because they are minors. So with no discipline, lots of money, and no consequences for their actions why is anyone surprised? It can be fixed by raising the minimum age.

While you raise some good points, such as many ARCA rides are pay-to-play, I disagree with raising the minimum age. As Charlie Krall said if these young drivers don’t learn in ARCA, where will they learn? Trucks? There are arguably already too many cautions in Trucks for drivers making mistakes, contact, etc. Those drivers have to learn somewhere.

What happened to learning at the home tracks across the country? The min age to run ARCA to NASCAR should be at least 18 years of age.

Ok. Let’s say ARCA raises the minimum age to 18. What reason would drivers have for competing in it rather than the national NASCAR series? The home tracks remark isn’t crazy. However, drivers would rather race ARCA tracks such as Phoenix, Bristol, Dover, etc. which are on the NASCAR schedules. Plus, there’s TV coverage – regardless of its quality – which incentivizes drivers to compete in ARCA rather than only at local short tracks.

Seems a little two-sided not to let the owners and crew members get involved, but the drivers are allowed to do whatever they want?

What about Richard Childress versus Kyle Busch or him threatening to fight Brad K recently? So NASCAR team owners in one series are suspended but not the other? Double standard???

Are you saying that Richard Childress tried to fight Brad Kesolowski lately? I hadn’t heard that. Give us some details, please.

After Keselowski wrecked Austin Dillon at Michigan, regardless of the intent, Richard Childress walked to Keselowski’s pit stall & exchanged words with the No. 2 team. It wasn’t a fight but a disagreement over a racing incident. I don’t know what Kyle Busch vs. Childress moment you’re referring to though.

Because there are questionable officiating decisions? If that’s your argument, it seems like a stretch to me.

I would interject that I bet the tensions are high in ARCA since they all know nobody stands a chance to win if Ty Gibbs is in the race. Can you imagine how discouraging that must be? I hope Grandpa is happy that he has made a joke out of a whole racing series. What a shame.

Corey Heim has won six times & Daniel Dye & Landen Lewis both have one win. Also, because Ty Gibbs has won 10 times & leads the points, I’d wager Joe Gibbs indeed is happy. As for ARCA’s stance on it, which is irrelevant to this article, series officials enjoy the teenage rivalry between Heim & Gibbs. The Winchester finish, Pocono, the superspeedways – all exciting to watch the points battle.

Billy V. has done the same thing for years. Now somebody is upstaging him.

David Gilliland should have been fined and suspended both by ARCA and NASCAR for a number of weeks. David is old enough and has been in the sport long enough to be punished for his child like behavior. Many of the drivers can use youth as an excuse but what excuse does David Gilliland have?

That’s a bit extreme, don’t you think? Yes, he is older so he should know better. However, as a team owner, he has a right to be upset over what happened to his driver. Is his behavior excusable? No – but you mean to tell me you’ve never been livid? It was a mistake; hopefully, the penalties will dissuade him from losing his cool again? But for a number of weeks? What good will that accomplish?